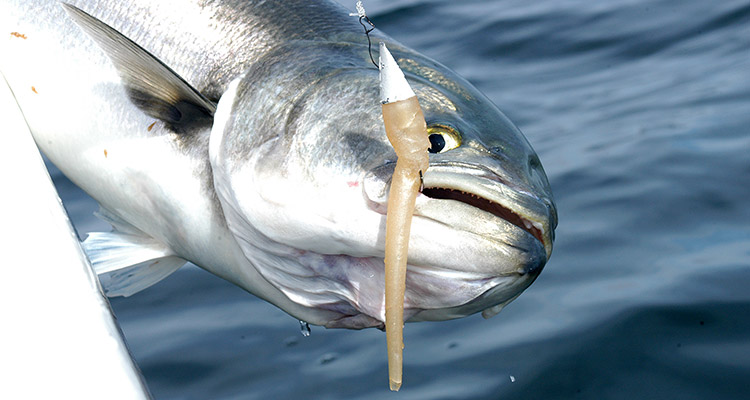 Note: This column oiginally appeared in the July 2007 issue of On The Water magazine. The recipe was included in Dave “Pops” Masch’s cookbook, Cooking The Catch.

All “Blues” Are Not Sad

High summer is here and so are all the fish that come with it, so let us catch some and cook them properly.

It is difficult to write column after column without getting both repetitive and boring for the reader, to say nothing of boring for me, but why should you care about my boredom?

Well, I know one creature that is never boring, either to catch or to eat, and that’s the much-maligned bluefish. Respected by all as a magnificent fighter, it’s a dangerous fish to handle, and when properly dealt with, delicious to eat. The bluefish is disliked by many for being oily or “fishy-tasting” and even repellent when cooked. These negative reactions are always about fish that were poorly handled when caught. Fishermen often catch blues quickly and in large numbers when the beasts are surface feeding, and in the excitement of the moment, the fish are thrown to the deck or put in boxes and forgotten until the commotion of the blitz is over, the tangled lines are straightened out and the gear is overhauled. Then the fishermen must talk over the action before finally getting to the now-dead fish cooking in the boxes or festering in the sun. Some people ignore this fish until they reach the dock, where they unload the spoiled fish to generously give it to their friends and neighbors, who soon learn to dislike the noble fish.

Every summer I write to exhort my readers to bleed each bluefish as it comes aboard. This is simply, though dangerously, accomplished by making an incision just behind the point where the gill covers come together on the underside of the fish. Do this carefully, for the sharp teeth and strong jaws and pugnacity of a bluefish will make short work of the flesh on a finger or thumb! I speak from experience. Large blues over 6 pounds should be dispatched with a “priest” or club of some sort applied vigorously to the top of the head before you make the bleeding incision. (The name “priest” for the chosen bludgeon is apt, for it applies the “last rites” to the fish.) I keep a bucket half-filled with water into which I put the fish after cutting its throat, to keep most of the blood off of the boat. As soon as it is bled out, I put the fish on ice or in a wet burlap sack, if ice is not available. Evaporation from the wet sack will keep the fish cool for as long as the sack remains damp. I then gut the fish as soon as possible, usually while still at sea.

If you follow my instructions, you will have a fine, generous gift for friends and neighbors, who will no longer hide when they see you coming with “fresh” fish. In fact, they will greet you with open arms and thank you profusely, especially if you convince them to prepare the bounty you have provided in the following manner, using what I call the world’s best bluefish recipe.

This recipe is not my own but came from Marcella Hazan’s More Classic Italian Cooking, published by Knopf in 1978. I have written of the recipe almost annually for the past eight years because I think it is important for the reputation of the bluefish as a culinary joy, and for you and your reputation as a culinary treasure to your friends and family. It is also easily prepared. What more could you ask for in a recipe?

Preheat the oven to 450 degrees. Peel and slice the potatoes thinly (about ⅛-inch thick). Mix the potatoes with half the garlic, half the parsley, half the olive oil and a liberal amount of salt and pepper in a 16×10-inch casserole dish, preferably enameled cast iron. Arrange the potatoes evenly over the bottom and sides of the dish, place it in the upper third of the preheated oven, and bake for 15 minutes. Remove the dish and place the fillets, skin side down, on the potatoes. Mix the remaining olive oil, garlic and parsley and pour over the fillets. Salt and pepper liberally and return the casserole to the oven for 10 minutes. Remove the dish from the oven, and using a spoon, baste the fish and exposed potatoes with some of the oil in dish. Loosen the browned potatoes from the sides of the dish and replace with unbrowned potatoes from the dish bottom. Bake 5 minutes more.

Serve piping hot directly from the casserole dish, scraping up browned potatoes stuck to the pan. Marcella says, “These are the most delectable bits, so save them for yourself or for someone you like nearly as well.”

I sometimes use two baking dishes and twice as many potatoes with the same amount of fish to provide more of these “delectable bits.” My family has almost come to blows over these browned potatoes. Does it matter which is tastier, the potatoes or the fish? Who cares? Go for it! Fame and glory or even appreciation comes seldom enough for the home cook.

This simple recipe is not only outstanding, but versatile; you can cook any firm-fleshed fish in this way. It’s great with swordfish (if you don’t dry it out), salmon, mackerel, and very good with striped bass; you almost cannot go wrong. The only dangers are not precooking the potatoes long enough or that most serious of culinary transgressions, overcooking the seafood. Try it with shrimp, scallops or both; or with squid, precooked octopus or a mélange of the whole works. You will not be sorry and your renown will grow. I promise!