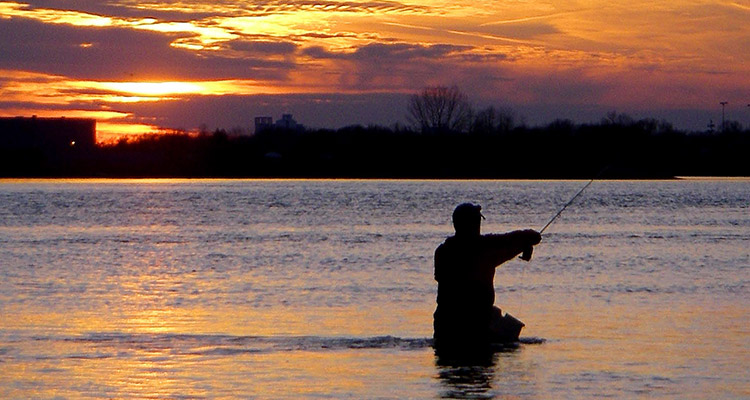 Let the Housatonic River tide you over with wintertime striped bass and Atlantic salmon.

There is absolutely no excuse for sitting around the house this winter, just wishin’ you were fishin’. For a quality coldweather fishing experience, look no farther than the Housatonic River’s tidal estuary, where you can enjoy a thriving striped bass and Atlantic salmon fishery all winter long.

Folks who are familiar with the history of PCB contamination in the Housatonic River but have not fished it might look at me cross-eyed when I talk about the river’s great fishing. But make no mistake, the Housy has made an amazing recovery in recent years, and its tidal estuary, from the Derby Dam all the way out to the river mouth on the Stratford/ Milford border, offers fishermen a shot at several species of game fish in the winter months. In addition to Atlantic salmon and striped bass, anglers can hook walleyes, largemouth and smallmouth bass, carp, perch and sea-run trout in this often-overlooked waterway.

The Housy’s remarkable recovery has resulted in healthy runs of protected blueblack herring and alewives, which are a key component of this outstanding winter fishery and no doubt one of the reasons why striped bass spend their winters here. Winter stripers bearing tags from Chesapeake Bay, New Jersey and Long Island have been recorded in the waters of the Housatonic, but it has yet to be determined whether these fish are migrating seasonally or if they are permanent residents for part of their lifespan. Leon Sylvester, founding member and current president of Friends of the Housatonic River, told me that FOTHR is discussing the possibility of a tagging program to improve understanding of these stripers’ migratory habits.

Housy anglers consistently land striped bass from 8 to 40-plus inches all winter long. Fly-fishermen and spin fishermen alike hook up by using the same techniques known to coax bass in the warmer months, but typically use a slower presentation in the chilly water. On any given winter day, a legion of small power boats, kayakers and shore anglers patrol this vast and fertile estuary in search of bass, slowly working jigs, plugs, soft plastics and flies, or drifting fresh bait. These winter fish are constantly on the move, following bait up and down the river in response to changing tides, temperatures and light conditions.

Striped bass tactics in the Housy are almost limitless, but it is important to be flexible so as to locate the moving schools of stripers. Boat and kayak anglers will use fishfinders, and fly-rodders will bring are on the bottom; adding a plastic worm to the bucktail will oftentimes trigger a strike. Swimming plugs like the Yo-Zuri Crystal Minnow and smaller lipless crankbaits like the Rattlin’ Rapala can be effective, and if the fish are near the surface, try casting topwater popping plugs.

Some shore anglers will keep an eye on the boats to see where the fish are being landed, while more experienced shore anglers will try to predict where the fish and bait are holding based on the tide. Throughout the entire lower estuary, tide plays a key role in determining where the game fish will be holding. All the way up to the Derby Dam, the brackishness of the water varies according to the height of the tide and the amount of fresh water that enters the estuary, and the degree of brackishness can indicate where a certain species or baitfish will be found. For example, sometimes during a good high tide in the spring or late summer, the bait will run all the way from Long Island Sound up to Derby. Right behind them will be schools of voracious bluefish, which eventually stack up at the Derby Dam to slaughter the bait, along with anything else that gets thrown into the mix. Likewise, after a large amount of fresh water enters the area, the striped bass will be found farther down the river unless a large run of herring or alewives moves up during the heavy flows.

Different areas of the Housy also feature bait-attracting structure, making for productive casting locations, and I have seen many spin and fly-fishermen wading the area around O’Sullivans Island and the Derby Dam. Don’t forget to exercise caution when wading – you could find yourself surrounded by water as the tide rises, so pay attention to dips and humps as you cast.

Each fall, the Connecticut Department of Environmental Protection gives the Naugatuck River a healthy stocking of 2- to 20-pound broodstock Atlantic salmon, many of which find their way into the Housatonic after the rivers’ confluence in Derby. These fish can be found in all areas of the lower river, and it is suspected that they run out to sea in the spring. Fishing for broodstock salmon is permitted in the Housy downstream of the Derby Dam, and from December 1 through April 1, fisheries regulations dictate a one-fish maximum per day.

These Atlantic salmon may be stocked, but they certainly behave like wild fish, exhibiting furious, acrobatic runs and a frustrating reluctance to hit. Techniques for landing these feisty salmon are as varied as they are for the Housy’s winter stripers. I have hooked into a few salmon using 1/8- to ½-ounce Rooster Tails, while expert salmon fisherman Russ Martin of Shelton has had great success with large Phoebes, Krocodiles, Rapalas and smaller flies. Russ has landed some 20-plus-pound Housy salmon and hooked into others that took off, tail-walked across the river and kept going, never to be seen again. In his opinion, the Housy’s striper fishery is certainly awesome, but there is nothing like the savage fight of an Atlantic salmon.

The Housatonic fishery’s incredible rebound is testament to the power and necessity of conservation, and if we continue promoting awareness of these natural resources, they will be around for future generations to enjoy. Recently, McCallum Enterprises, the owner and operator of the hydroelectric facility at the Derby Dam, has begun making motions to build a fish ladder that will give anadromous species such as alewives, herring, sea-run trout and salmon access to their traditional spawning areas upstream.

The fish ladder, a requirement under the company’s licensing agreement with the Federal Energy Regulatory Commission, is slated to cost the company approximately $2 million to build. Although McCallum had been making some progress toward this goal, lack of funds has delayed the development. In order to raise the $2 million price tag, McCallum Enterprises has looked into selling its parcels of land next to the dam where the old hydro-canals are located. Originally, McCallum Enterprises proposed that the city of Shelton purchase the parcels to keep the space as open land, but the expense was infeasible for the city. In response, McCallum Enterprises announced its plan to fill in the canals on the Derby side of the river and sell the six-acre property for residential development.

When McCallum Enterprises submitted an application to the Army Corps of Engineers for this development, the Housatonic Valley Association sent a letter to the ACOE suggesting that the application be denied on the basis environmental concerns while maintaining support for the fish ladder. Eventually, public outcry against the measure, backed with massive opposition from many activists groups and the city, convinced the ACOE to call for a public hearing. In response, McCallum Enterprises has withdrawn its application.

According to Jen Gunther, the water protection manager for the Housatonic Valley Association, public education and activism is the key to resolving situations like these. Most people are not aware of the value of the vast and fertile ecosystem of the lower Housatonic, and public education is an important first step toward stimulating public interest in protecting it. Educational programs that teach about maintaining, preserving and improving such vital areas will eventually open the public’s eyes to the necessity of environmentally conscious practices such as low-impact development. Only by understanding our environment and dedicating ourselves to protecting it has the Housatonic River been able to rebound, giving us a tremendous fishery all year long.

This winter, take comfort in the fact that winter fishing doesn’t require a wait for ice or a long drive; there’s a great “off-season” fishery right here in New England. Although I can’t offer you any guarantees (this is fishing, after all), I can say for certain that the only way you’ll catch fish, regardless of species or season, is to show up and get your line in the water. So what’s it going to be this winter – Christmas shopping and vegging on the couch, or angling for some of the hardest-fighting fish in the Northeast?