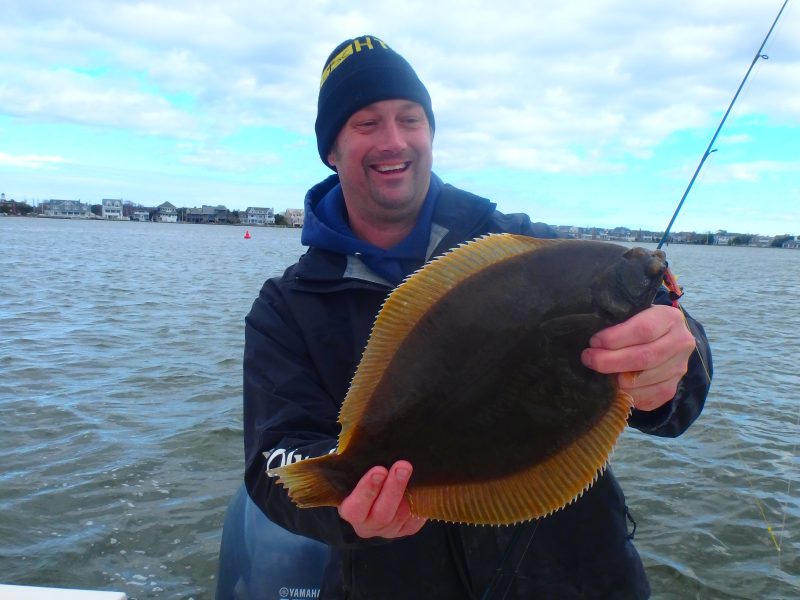 While the New Jersey winter flounder season opens on March 1, the fishing in the bays and rivers can be productive through May.

Rewind back to April 1998 in Shark River New Jersey. From the old Captain Bill’s Bait and Tackle in Neptune, a buddy and I rented a 14-foot boat with a 9.9-horsepower engine on the back and motored out into the Shark River channel about 10 minutes away, where we set the anchor and deployed chum pots filled with clam and mussel logs over the side. Two hours later, we had already landed 30 winter flounder to 4 pounds, throwing back the smaller ones. It was almost a joke. “We might as well go fish for winter flounder since the bass aren’t here yet.” Now, how we pine for flounder days like that again. The good news is that in the past decade or so, there have been some years of pretty good flounder fishing, but most springs are hit or miss.

New Jersey winter flounder fishing usually fires off hot in April and May in New Jersey, though by May, anglers are dedicated to chasing bass and blues, forgetting about blackbacks. Don’t make that mistake. Put aside some time this month and hit the backwaters. Flounder’s fresh, white flaky meat is boomin’ in the frying pan.

A general rule for winter flounder fishing is to target them on bright, sunny days that warm up the water quickly in back bays. Flounder fishing is extremely tide-dependent, though wind can play a big factor in success as well. The ideal situation is a windless, sunny, blue-sky day on the start of the outgoing tide. For a 10 a.m. high tide, you should be on anchor at 8 a.m. to catch those last two hours until slack, then fish the next 2 to 3 hours after the slack.

Flounder will bite on most moving-water scenarios, but the fishing tends to be best in slower-moving current. Be warned, if it’s a wind-against-tide scenario, your chum will run out the other side of the boat or up toward the bow, and you won’t be in the zone to catch fish. That’s not to say the flowing waters around dead low won’t be productive—be sure to try both if time allows.

Use a light- to medium-power rod with fast action to feel the bite and set the hook with authority as flounder nip at baits. These fish put up a spirited fight, especially on lighter tackle. A prime setup is a 6½-foot Shimano Terramar or 7-foot St. Croix Tidemaster Inshore spinning rod, matched with a 4000-class Shimano Stradic spinning reel. Spool up with 12-pound monofilament or 20-pound PowerPro braided line. For rigs, start with a three-way swivel with a sinker clip, then two 12-inch snelled Mustad size 6 Chestertown or size 8 Mustad Long Shank Beak hooks to get into the small mouth of a flounder, while having enough shank to thread on a good piece of worm or clam bit.

Chumming and its deployment is absolutely key in winter flounder-fishing success. Cylindrical metal-mesh chum pots filled with frozen clam, mussel, and corn combinations work best; hang one or two off the bow so they sit firmly on the bay floor. Be sure to poke the chum log bag with holes before you put it in the pot for a slow, sliding slick. If you really need to get the slick flowing, take the whole frozen block out of the bag.

To ignite the flounder bite, cut off the top of one of those fat Wiffle-ball bats, load up the cavity with clam chum, and Voila! You have a chum launcher that can spread the slick well behind the boat.

Winter flounder feed on a variety of sandworms, bloodworms, tapeworms, and clams. To use fresh clams, cut them into small bits, though the best part for bait is the tougher, orange part of the ribbon. I have found countless clam siphons in the bellies of flounder, so they must be snipping them off in the mud bottom when foraging.

Anytime I shuck clams, I keep the siphons and thread them on the hook as bait. Sandworms, bloodworms, and tapeworms can all be cut into 2- to 3-inch lengths. Thread them onto the shank of the hook, leaving a good inch to hang off the barb bend. With all baits, juice up with FinEssence shedder crab or shrimp oil. The more scent you put in the water, the better.

Tricks of the Trade

Start with your sinkers. Many old-schoolers paint theirs yellow, as the color is a known flounder attractor. The right sinker shape can even make a difference because a coin-shaped sinker stirs up the bottom better than a bank sinker when bounced up and down. It will also lie flat on the mud bottom, presenting your bait in the strike zone. Attractants on hooks such as small 1-inch yellow grubs, Fishbites strips and yellow beads can also spark strikes.

If you are fishing shallow enough, use a plunger fixed on a long broomstick dowel and plunge the water to stir up some activity. And here’s a dirty little trick: always have one 12-inch snelled hook tied directly to the bottom square in the chum-pot metal, make sure it rests on the bottom, and bait it with bits of mussel, clam or worm. More times than I can count, I’ve pulled a flounder or two up with the hooks on the chum pot—the flatfish come right up to the pot, feeding like pigs in a trough.

The vast Raritan Bay expanse is the first area to pound for flounder. Try the Keyport Flats, which is a half-mile to 1-mile stretch of muddy shoal bottom, the mudflats west of the Keyport 1 can, Morgan Creek outflow, the Cedars, and Romer shoal. The average depth is 16 to 18 feet, with occasional humps of 12 to 14 feet. The outgoing tide produces better since it is warmer, and when the temps hit 46 degrees, the flounder really start chewing.

The Manasquan River is known as a late springtime hot spot when the flatties amass and begin moving out of upper Barnegat Bay, using the Manasquan River system to enter the ocean. As they push their way out of Barnegat Bay, they tend to head to spots such as outside the Point Pleasant Canal off the old hospital (now known as the Condos), as well as any channel edges west of the Route 35 bridge.

Once late April and May hit, fish the waters east of the train bridge and off Dog Beach and the Coast Guard station, where the remaining flounder wait it out to exit through the inlet area.

Barnegat Bay usually is the central point for winter flounder pounders in the springtime. The spill-out area of Oyster Creek usually has winter flounder packs fanned out and feeding on the flow of sea bugs and worms that flush out of it. Once waters warm up enough for flounder to comfortably spread out even more, the packs will move onto the flats between the BB and BI Buoy, and the fleet usually move between both markers as they test the waters and try to find the schools. The 40 marker is another area where flounder like to gather.