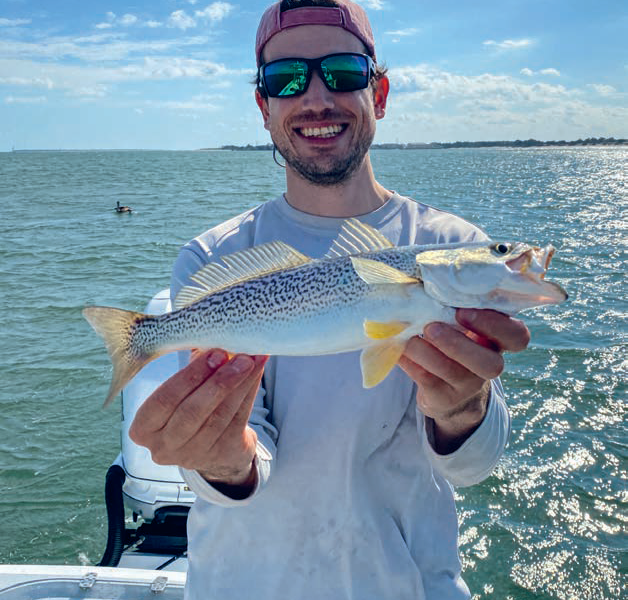 For fishermen who have spent the past several decades plying the surf and nearshore waters from Cape Cod to North Carolina, few changes have been as dramatic as the disappearance of weakfish. The population of this member of the drum family, also known as “squeteague” in Rhode Island and “gray trout” in more southern haunts, crashed during the early 2000s and has been considered depleted since 2003. Despite strict harvest limits for both recreational and commercial fishermen, the stock has yet to show any signs of recovery. As a result, it’s attained a near-mythical status for anglers north of New Jersey, many of whom have never seen one.

Weakfish have a life history that should make them resilient to overfishing and able to recover quickly—they grow fast, mature at age 1, and produce a lot of eggs. So, why no response anywhere along the coast to the current management measures, which include a recreational one-fish bag limit and 100-pound commercial bycatch limit?

The answer may lie in a misunderstanding of the magnitude of a fundamental fisheries science metric: mortality, which refers to the proportion of fish that die from one year to the next. Stock-assessment scientists divide it into “fishing mortality”—fish that are killed through fishing—and “natural mortality” due to predation, disease, or other natural stressors. Unlike fishing mortality, natural mortality is difficult to observe directly, so scientists often assume a constant value based on the life-history characteristics of a species. For example, if a species grows quickly and has a short lifespan, it will likely have a relatively high natural mortality rate.

Because fishing mortality for weakfish has been fairly constant in recent years but the stock has still failed to recover across its entire range, scientists have suspected that natural mortality may be higher than is currently assumed. Investigating that possibility, however, means calculating natural mortality from scratch based on direct on-the-water observations.

To estimate mortality, scientists deployed acoustic tags on weakfish from New Jersey to North Carolina, focusing their efforts on tagging during the fall months. “We know that weakfish generally migrate offshore and south during the late fall, and that they tend to return to the same inshore areas in the spring to spawn, a behavior known as ‘site fidelity,’” explains Dr. Jacob Krause, now a fish biologist at the U.S. Geological Survey, who investigated the causes of weakfish mortality during his Ph.D. at North Carolina State University. By tagging fish in the fall before they move offshore (where little fishing takes place), and observing how many fish returned the following spring, he and his colleagues could estimate how many fish died during the winter from non-fishing impacts. “We consistently see high numbers of young of-year weakfish, and we think much of the mortality is happening after their first growing season,” Krause says, noting that weakfish born the previous spring can grow to 10 to 11 inches by fall.

In total, 342 weakfish ranging from 9 to 34 inches (with an average of 14 inches) were surgically implanted with acoustic tags that “pinged” at regular intervals and had battery lives of 6 to 18 months. The research team relied on a broad network of acoustic arrays, or listening stations, up and down the coast to detect tagged weakfish.

“We’re indebted to both fellow scientists and fishermen for their collaboration on this study,” says Krause, noting that the research was funded by the North Carolina Division of Marine Fisheries. “Fisheries scientists whose acoustic telemetry arrays detected our tagged weakfish generously shared their data in order to provide a more complete picture. Several charter captains, meanwhile, were helpful in showing the research team how to catch weakfish in order to deploy tags.”

Low Survival and the Bottlenose Bottleneck

As expected, the tagging data indicated weakfish moving offshore during the fall months, peaking during September in New Jersey and November in North Carolina. Striking, however, was the almost complete absence of fish returning the next year. “Some of our tags had long enough battery lives to be detected over several years, but of 149 such tags deployed in the fall months, only 2 were detected the following spring,” says Krause. “With presumed site fidelity and a strong network of acoustic arrays throughout the Mid-Atlantic, we thought these fish would have been detected somewhere if they were alive. But because they weren’t, we’re fairly certain that there is a lot of mortality happening in the winter.” In fact, based on their observations, Krause and his colleagues estimated that less than 1% of weakfish survived from one year to the next.

So, what is happening to weakfish during the winter months? The culprit may surprise you. “We think that bottlenose dolphins, which frequent Mid-Atlantic offshore waters in the winter, may be a big factor,” says Krause. “Necropsies from stranded dolphins suggest that up to 49% of their winter diet is weakfish, and some of our modeling work indicates that they may be responsible for over half of weakfish predation, with the other half coming from species like striped bass, bluefish, and spiny dogfish,” he explains. As far back as 2006, fisheries scientists suspected that predation may be one of the reasons for the weakfish’s stubborn lack of recovery, but this is one of the first pieces of concrete evidence for that hypothesis.

Putting the Pieces Together

“While fishing may have led to the initial stock decline, we think predation is one of the main reasons why it hasn’t been able to bounce back, even though weakfish clearly have the life-history traits to do so,” Krause explains.

This study is just one element of a larger body of work that Krause has led to investigate weakfish population dynamics, which includes conventional tagging and gillnet sampling. All of this research suggests that natural mortality is to blame for the lion’s share of total mortality—as high at 97%—and that most natural mortality occurs during the winter months. The current stock assessment, meanwhile, estimates that only about half of mortality is from non-fishing activities. “If you had one study, it would be one piece of the puzzle, but having results from all three studies in hand gives a much more comprehensive sense of what’s going on,” explains Krause. He mentioned that stock assessment scientists at the Atlantic States Marine Fisheries Commission have been open to this new research, and he is hopeful that his results are incorporated into future assessments.

Fisheries scientists will continue working to unravel more details on the weakfish’s failure to recover and to determine whether any additional management levers may exist. However, with the reasons for mortality largely outside of managers’ control, options for the latter may be hard to come by. In the meantime, while young-of-year or 1-year-old weakfish of less than 14 inches are not uncommon south of Chesapeake Bay, catching a weakfish of any size whatsoever north of New Jersey will be considered a noteworthy feat for the foreseeable future.