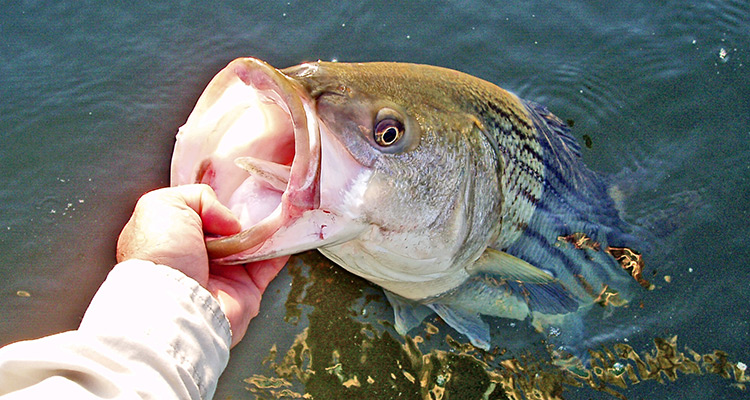 The bays and harbors of western Long Island are spring striper hotspots you can count on.

The vernal equinox marks a timeless renaissance. Each year in the spring, the sun’s angle in the sky steepens, winds change direction from the north and east to the south and west, and our watery world sets in motion an eons-old metamorphosis. The Long Island Sound fishing season characteristically advances from west to east, with the best early spring fishing occurring in the extreme western reaches of the Sound. Much of this activity is driven by the masses of striped bass migrating out of the Hudson River, into the East River and then following time-honored routes into the Sound.

The North Shore of Long Island has many harbors and bays, the product of a terminal moraine glacier that put on the brakes thousands of years ago. After a little “renovation” work here and there over the years, today we have a number of very productive and fishable havens. Most of the western North Shore harbors exhibit many of these same attributes and traits that attract and hold fish. For the most part these harbors are very active in the early part of the season – April, May and June – and then again in the fall. Once the waters warm and the bait moves outside into the Sound, the fishing inside slows down with the exception of early morning, evening and nighttime fishing. The western North Shore offers numerous places for fish to feed and hide and to amass during tide movements. This provides a variety of exciting opportunities for the sport fisherman. While the early season in this part of the Sound features bass, weakfish and then bluefish, the later months will often also bring fluke, Atlantic bonito, Spanish mackerel, and false albacore. The harbors and bays situated in this stretch of the Sound are especially productive fishing locations.

Some locations within the western Sound have greater tendency toward holding bigger bass throughout the season, while other areas appeal to school bass populations; most are very productive in the early parts of the season. Generally speaking, each area sees peak times when big fish move through or take up residence. But fish are not always predictable and their patterns of travel change from one year to the next, so it pays to stay nimble.

The areas in proximity to the Throgs Neck Bridge represent the western boundary of Long Island Sound. These waters offer excellent early season opportunities for striped bass as the fish migrate out of the Hudson and East rivers and into the Sound. This is one of the regions that annually report some of the first bass of the season. Post-spawn river bass are typically hungry creatures and feed voraciously upon entering the Sound. The peninsula of Throgs Neck itself offers some fine angling, as do surrounding areas of the East River, Little Bay, Stepping Stones and portions of Eastchester Bay. This is a high-commercial-traffic area and the boating angler needs to exercise extreme caution while navigating and fishing these waters.

While its name may have ominous and foreboding connotations, the fishing is far from that. When the resurgence in stripers began in the early 1990s, this was one of the first places that I cashed in on the revived bounty of bass. Since then it has only gotten better. The structure around the light is an ideal habitat for stripers. Its currents and depth changes can be quite conducive to productive fishing. This very rocky area is fishable from a boat.

I caught my first keeper striped bass in the waters of City Island many moons ago when the legal limit was a mere 16 inches. Two of the best early season locations in the area are Turtle Cove and the waters around Hart Island.

This is the perennial early season hotspot in the western Sound. The extreme back portions of the bay consistently turn on with school stripers during mid to late April. The timing varies depending on the mildness or severity of the winter. The bay has an average depth between 6 and 8 feet and substantial tidal movement of 7 to 9 feet.

Moving eastward, Manhasset Bay is another productive early season location. Bluefish maintain a presence in the area throughout most of the summer. The bay gets active again with bass in the fall months. Some areas worth exploring are Plum Point, Toms Point, the entrance to Port Washington, Sands Point, Barker Point and Half Moon Beach. Some very substantial bass have been taken from this bay, especially when bunker are present.

A number of coves and points highlight the light-tackle and fly-fishing opportunities of Hempstead Harbor. This harbor is a good place to work off the effects of cabin fever since it attracts not only large numbers of school-sized bass but its fair share of large bass as well. Each season some very big stripers are taken from this area. Some of the more popular areas inside the harbor are Bar Beach, Mott Point and Mott Cove, Crescent Beach and Dosoris Creek.

Outside the harbor and a bit to the east is Matinecock Point. While it too attracts stripers and bluefish, it is best known as a weakfish spot. Of late this area has seen increasing numbers of weakfish. While most are small, the area holds larger fish as well – some upwards of 10 pounds.

This well protected bay has some excellent fishing structure in the form of sunken barges and deepwater areas surrounded by shallow expanses. Oyster Bay Harbor and West Harbor offer the boating angler a number of fly-fishing and light-tackle opportunities. The areas around Center Island, Cove Neck, Rocky Point and Center Island Reef can produce fish in season as well. This region is especially productive in the spring. The shallowest parts of the harbors are very well suited to kayak fishing.

Cold Spring Harbor is a well-protected deepwater bay containing some wonderful rocky beaches. It has been used as a safe haven since the days of the American Revolution. The harbor got its name from the many cold-water springs that bubble up throughout the area. Those springs can be used to the angler’s advantage in the warmer days of summer as bait and game fish seek cooler, comfort-zone temperatures. The early season in this harbor finds a wealth of bait and striped bass spread throughout the entire area. The shallower lower portions of the lower bay heat up first in the spring and can make for some enjoyable fishing for school stripers. Later on in the season, bluefish dominate the fishing scene, but the lucky angler just might tempt a large tiderunner weakfish. As with other North Shore locations, rocks and boulders are a part of the land and waterscape.

Cold Spring Beach, Floyd Beach, Lloyd Point and areas around the Sand Hole are favorite locations. Lloyd Neck is also home to Caumsett State Park, which is a favorite destination for local fly anglers. Another area worthy of exploration is Lloyd Harbor, tucked in between Cold Spring Harbor, Lloyd Neck and West Neck. This entire area can be very productive.

Huntington Harbor is situated at the extreme southwest end of Huntington Bay. Northport Bay is located slightly to the east of Huntington Bay and is positioned south of Eaton’s Neck. The waters in and around both bays are excellent for early season boating and wading anglers. Two peninsula beaches, East Beach and West Beach, frame the opening to Huntington Bay and are ideally positioned to attract early season striped bass. Adjacent to West Beach and forming somewhat of a fork is Sand City, a very popular spring fishing hole. At the northern reaches of East Beach is Target Rock. The waters around this location are excellent as well. Located towards the back of Northport Harbor are Centerport Beach, Centerport Harbor and Little Neck Point, all worthy fishing spots.

Smithtown Bay is an exceptionally productive fishery situated between the two equally prolific promontories of Eaton’s Neck to the west and Crane Neck to the east. The seasonally productive Nissequogue River empties into the western end of the bay. The bay also stretches for a length of approximately 10.5 nautical miles and attracts its fair share of early season striped bass and bluefish. The shallow portions of the bay contain varied fish holding structure and habitat from sand beaches to rocky shoreline. The bay also has a relatively extensive set of flats that heat up first with the rising temperatures and offer early season sight-fishing opportunities for striped bass. Most of this fishing is by boat, either poled or moved along with the aid of an electric motor.

Moving further to the east within Smithtown Bay you will encounter Stony Brook Harbor and Porpoise Channel, both excellent and popular fishing locations. Long Beach is a productive stretch as well, especially the section immediately adjacent to the harbor entrance. The tide flows create a substantial current in this area. The backwaters of the harbor are a terrific spring location for striped bass and the myriad of backwater sloughs; drains and grassy banks make for ideal light tackle and fly-fishing. West Meadow Beach lies slightly east of Stony Brook and is yet another very productive fishing location. It is one of the first areas to benefit from stripers moving out of the harbor in late spring and early summer months. Walking north and east toward Crane Neck should reveal a number of excellent areas that attract bass and early arrival bluefish.

Port Jeff is one of the most active harbors on Long Island. It provides berthing for a large fleet of recreational boats and commercial party boats. The harbor itself like so many other protected bays and backwaters can, at times, be quite productive for striped bass. The area is best known for its phenomenal run of fluke. During peak years it is actually amazing how many of these flatfish are caught. They are a great fish to target with the light tackle, especially when in their shallow water holding locations. Bluefish also consistently invade this area and range in size from small snappers to massive fish of over 20 pounds.

Within the boundaries of the harbor are other areas worth exploring: Conscience Bay, Setauket Harbor and Strongs Neck. These are ideal locations for a shallow draft boat such as a flats boat or a kayak.

This is one of the most popular early season locations for striped bass. The harbor is a fertile and prolific fishery and acts as a nursery for many species of fish. The inner reaches of the harbor and its backwaters and salt marshes are productive early in the season and for as long as bait remains abundant. Mount Sinai Harbor is one of the first in the central sound area to heat up in the spring, both in regards to water temperature and fish activity. It is one of the most popular areas of the central north shore since it offers back bay, pier and beach fishing opportunities.

Cedar Beach runs east from the east entrance of Mount Sinai Harbor and is a very popular appendage of the harbor. The harbor and beach consistently attract solid runs of early season bass and bluefish.

If you motor east from Mount Sinai in a boat you need to pay particular attention to the numerous large rocks and boulders that become exposed during periods of lower tides. These rocks have claimed more than their fair share of lower units and fiberglass!