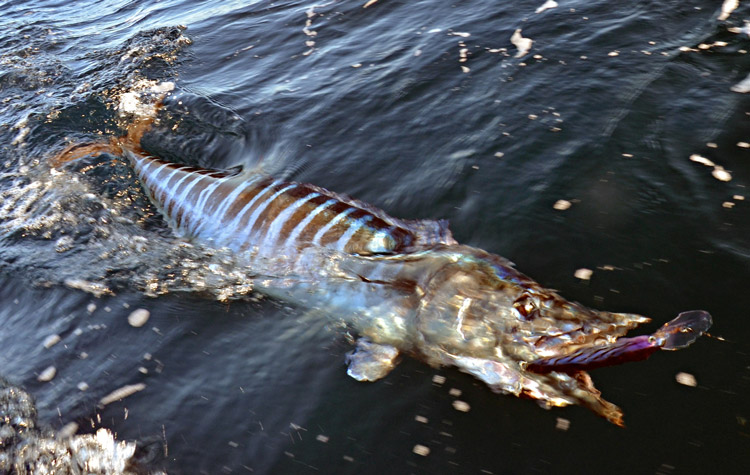 Wahoo are considered a rare catch for offshore fishermen in the Northeast – a chance encounter when targeting tuna and marlin, and rarely landed thanks to their razor-sharp teeth. However, over the past 10 years or so, my buddy Keith Lane and I began to notice a trend. From mid-August through September, when trolling along the hardest temperature breaks in 20 to 40 fathoms, we started encountering wahoo, usually revealed by a clean bite-off of our mono-rigged offerings. More often than not, the hits came on the cold side of the break.

Offshore fishing in southern waters, where wahoo are more common, has helped us gain a broader perspective. In the Florida Keys, when we were fishing for wahoo on the full moon, by far the preferred bait for chunking is false albacore. Last summer, something clicked. Guess when the wahoo head inshore? You guessed it … the same time as the false albacore! Testing this theory last fall, we made three trips into water depths less than 220 feet where false albacore were prevalent. We trolled only wire-rigged lures, and we caught wahoo on every trip! Hunting them in New England is a bit more involved than merely heading offshore in the early fall, but if conditions are right and you follow a few basic guidelines, there’s a very good chance you will connect with a species previously considered only a rare encounter in our area.

Wahoo are a fast, vicious member of the mackerel and tuna family. They are most closely related to king and Spanish mackerel, and are spectacular table fare. In Hawaii, they are called ono, which means “delicious.” They are one of the fastest fish in the ocean, able to approach speeds near 60 miles per hour in short bursts. Their incredibly sharp cutting teeth are capable of severing a human hand in one quick bite! They run quite large here in the Northeast – the current Massachusetts state record is 131 pounds, and the average size is between 50 to 60 pounds. While wahoo can be found from inshore waters to well over 100 fathoms, their preferred depth is 30 to 40 fathoms. They are warm-water fish, primarily inhabiting blue Gulf Stream waters, but can tolerate temperatures as low as 65 degrees as long as warm water is close by.

Wahoo are structure-oriented fish. They hang on temperature breaks, weed lines, buoys, floating debris and bottom structure. They love to hit fast-moving baits and seem to strike only subsurface. As a result, I have rarely seen one actually strike, other than seeing the flash of a fish streaking across the spread. Then, there is the inevitable “plink” and your lure is gone … unless you are ready for it.

These fish can be caught by baiting, jigging or trolling. Baiting here in the Northeast is not usually a viable option because concentrations are much lower than in southern waters where chunking and live baiting routinely produce fish. Jigging is definitely worthwhile if you happen upon a large log or other structure that has been undisturbed for a long period. In 2008, I jigged up five wahoo with an A47 diamond jig off a single floating piece of plywood in the Gulf Stream off Miami. Offshore buoys are another example of a structure worth targeting with jigs. However, it is trolling that can pay big rewards when done the right way here in New England.

Wahoo can be caught from near-shore to offshore waters in the Northeast from July into October, as long as warm Gulf Stream waters are in the area. While trolling the canyons during midday, it can be worthwhile to switch over to a wahoo spread when moving to a new spot or approaching structure such as a buoy or substantial weedline. However, in mid-August through September wahoo can be hunted successfully in near-shore waters when conditions are right.

The key is finding a sharp temperature gradient in 30 to 40 fathoms. One degree of difference can be enough, but in general, the bigger the water change, the better. Last fall, we found a break that went from 63 degrees on the cold side to almost 76 degrees in less than half a mile. That break was in 200 to 220 feet of water, a perfect depth for wahoo. The cold side was stacked with false albacore and frigate mackerel, and the wahoo were there as well. Similar scenarios, even with less dramatic temperature gradients, have yielded wahoo catches within sight of land on more than one occasion. These temperature gradients act like walls. Warm-water fish like to stay on the warm side, and cold water species prefer the cold side. The result is that fish concentrate on the edges because they keep bouncing against the water they don’t like. Add a fixed structure, whether it’s a buoy or bottom structure, and the odds for success increase.

There are three basic approaches to trolling for wahoo: slow, medium, and high-speed techniques.

Slow-speed trolling can catch, but is primarily used when fishing for a mixed bag of species. A couple of wahoo plugs, such as a Rapala deep-diving X-Rap or a Braid Marauder, are rigged with wire and fished off flat lines in the prop wash at 7 to 8 knots. Other tuna and marlin lures are deployed farther back and to the sides. This is the method we primarily use in the canyons when fishing a weedline or lobster pot line. But, if truly hunting wahoo, you can’t merely cover ground to entice them like higher-speed methods will.

Medium-speed trolling is the method we use most. Though we’ll catch the occasional mahi or tuna, it is often an all-or-nothing approach. Taught to me by Capt. Augie on the Predator out of Bud N Mary’s in Islamorada, Florida, it allows us to fish a variety of lures effectively and cover more ground, thus improving the odds of success. Trolling this way is done at around 10 knots and all lures are wire-rigged. We still deploy two wahoo plugs off the transom, but add a couple of weighted Joe Shutes 8-ounce lures rigged with belly strips off the riggers, and the spread is finished off with two gang-hook-rigged Ilanders rigged over 8-ounce weighted rubber skirts (red/black or purple/black are go-to colors). These are fished way back in the spread – 200 and 300 yards back, respectively, which allows them to run in pure, clean water, well out of the prop wash. In order to accomplish this, 70- or 80-class reels loaded with 65-pound-test braid allows the lures to be stealthy enough and to stay subsurface for most of the time—an important key to the wahoo bite. A 20- to 30-foot section of 150-pound-test monofilament between the braid and short wire trace helps absorb the shock of a strike.

High-speed trolling is a good method when travelling to a new spot or fishing hard, long breaks where covering a lot of water is helpful. The high speed of 12 to 16 knots or even more may provoke a wahoo reaction strike that would not happen at slower speeds. Plugs and baited skirts come in, and the two long, skirted Ilanders have 2- to 3-pound trolling weights added in front of them. Eighty-pound reels are a must, and require continuous tending. When a fish hits, the drag must be backed off immediately, or you will be left with nothing but a pair of wahoo lips on the line!

Remember wahoo are vicious! When you bring them into the boat, make sure everyone on board is well out of the way. More than one fisherman who has stepped too close or picked up a green fish to get a photo has been severely injured. A quick strike to the top of the wahoo’s head with a bat will make things much easier.