The variety of rigs used in swordfishing seems to be endless. Many who fish the canyons anchor for the night. This can be productive when chunking for yellowfin and of course it will produce an occasional swordfish, but drifting is a far more productive way to target the broadbill – that’s how the long-liners do it. The fish are spread out, and odds of bumping into one are much better if on the move. We like to set up a drift to cover as much productive water as possible. Ideally, we will only have to make two drifts a night, covering many miles of water.

At its most basic, a swordfish rig involves a 10- to 12-foot leader with a 9/0 to 11/0 J-hook, a weight and light stick or electric light attached by a black rubber band 30 feet from the bait, and a balloon attached to the line at the desired depth should do it. This is an easy rig to use, and it will produce bites. There are, however, advantages to “kicking it up a notch.”

While some use circle hooks, the most experienced swordfishermen will tell you that J-style hooks are more productive. Another consideration is the thickness of the hook. Swordfish are incredibly soft-fleshed fish. Hooks pull very easily, and thus I prefer hooks with thicker steel. Lindgren-Pitman makes very good, inexpensive commercial 9/0 black hooks that work extremely well. Also, we have had good luck with Owner Jobu hooks in 11/0 and 12/0 sizes, as well as Jobu big game hooks.

I recommend at least 300-pound-test leader material. I broke off a huge fish several years ago on 250-pound Momoi after 2 1⁄2 hours due to bill chafe, and I will never go lighter again. Smoke blue 300-pound-test Jinkai has a small diameter and should be strong enough to do the job. 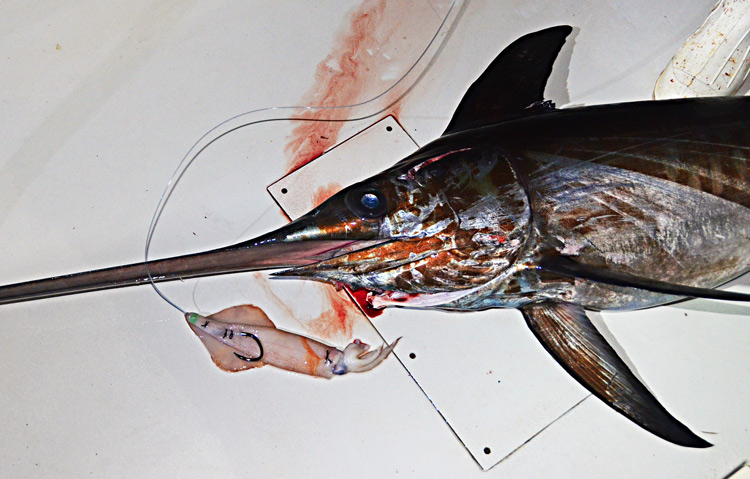 For getting the bait down and keeping it there, I have found a 2-pound lead to be perfect unless the drift exceeds 1.8 to 2 knots. In this case, 3 pounds or more may be needed to keep a bait down.

A good light source is also of supreme importance. It is well known that the swordfish are usually first attracted to the light, and when they get close enough, they spy the bait. Light sticks work, and if you decide to use them, choose green as it has the wavelength seen at the greatest distance. Lindgren-Pitman Electralume lights are the gold standard. I have found that green and the “disco” multi-colored strobe work best. Small, water-activated strobes also attract fish. Squid signal each other using pulses of light, and it is thought this is why swordfish are attracted to lights.

The moon phase and intensity should dictate the distance from the light to the hook. On full moon and bright nights, the light source should be close to the bait, 20 to no more than 30 feet. On new moon, or darker nights, we place the light up to 60 feet from the bait, which will still allow enough light to illuminate the squid.

Most fishermen in the canyons use 80- or 100-pound test line on their reels. A trick I learned from Ray Rosher in Miami is to tie floss loops onto the line with half hitches at 30 and 50 feet, then a final loop at your desired depth. This allows your light, the weight, and the balloon or float to be attached using long-line clips, making removal during the fight very quick and simple. Reinforce the floss loops with glue to prevent slippage, and consider doubling the loops if using standard rigging floss. I generally set the depth of the baits on the four rods at 75, 100, 150 and 200 feet. Each rod is marked accordingly with a piece of colored tape.

Most people use balloons as floats. One trick is to use electrical tape, to tape a lightstick to the top of the balloon, or insert the lightstick inside a light-colored balloon. Try using a different color for each, to help identify them. Avoid red light, as it will tend to disappear from view quickly as they drift away from the boat.

A mooring pennant with a 3- to 4-foot stick, (you can make your own using a lobster float and a driveway marker fiberglass stick from a hardware store), with the weight cut off the bottom and a long-line clip in its place, has some very major advantages over the simple balloon or milk jug. Two light sticks are attached to the stick, one at the end, and one at the base. When drifting, the weight on the line pulls down on the pennant, standing the stick straight up and down. Probably one out of every three swordfish comes toward the surface when it takes a bait. When the weight is lifted, the stick will lie flat on the water, signaling the bite. This method accounted for two swordfish for me in the past two years that I would have never known were there, had I not been watching the floats! They never took drag, and chances are we would never have landed these fish if we were forced to wait for another signal.