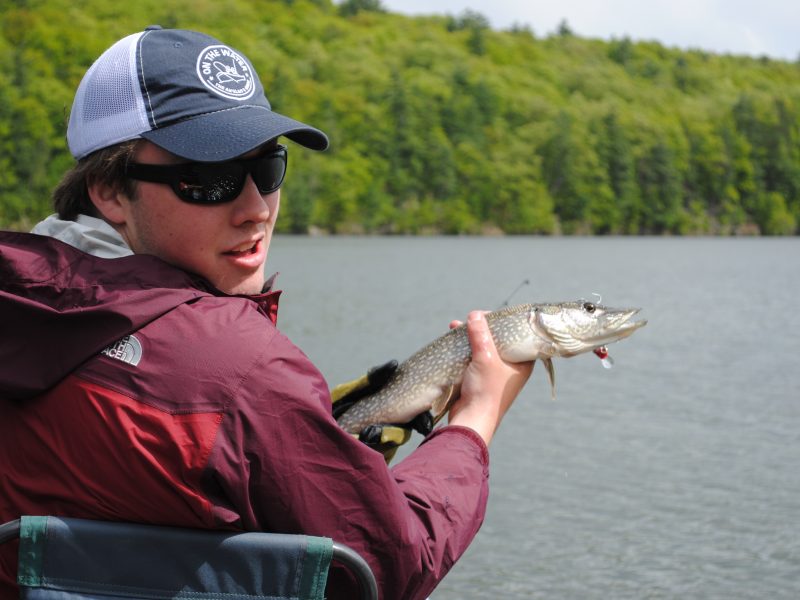 Waking up on that dew-filled morning at 4:00 am to get on the road northbound this past weekend was an experience worth the struggle.  For the past few years, my dad and I have been road-tripping back to his favorite northern pike spots from when we lived in Vermont during my early childhood years, and each year is more and more rewarding.  Neither of us are dialed in perfectly as to what the fish are biting, or how to catch a monstrous slob, like those that come out of Canadian Lakes, but we enjoy the trip just the same.

We arrived at Colchester Pond, an old honey-hole in Colchester, VT that has recently been developed for public use, looking for some action early Friday morning, with the highest of hopes.  Those hopes were partially dashed when, 50 yards offshore whitecaps started to smash us broadside, giving our Old Town canoe a chance to prove its worth.  While we didn’t flip, the wind did force us to stick exclusively to the three shorelines of the oval pond that avoided the wind out of the north.  We used the wind to our advantage, cruising north to south trolling spoons and in-line spinners.  Our first hook-up came on a red-and white Daredevle, one of the most consistent and classic pike lures.  Last spring, almost every single strike we achieved was on the red and white color combination, so those were the ones we threw on the rods first.  We landed that first fish, and were ready to keep catching them, but we weren’t seeing much action.  When the buck tails, spoons, and spinners weren’t doing it, we started getting creative with our tackle, with positive results.

An interesting lure that attracted aggressive strikes and consistent hook-ups was, surprisingly, a larger saltwater lure from my striped bass arsenal.  A white-bodied Bomber Long A with a red head and black markings elicited strike after strike when trolling and casting.  Trolling proved most effective and would pull pike of all sizes into action, even those for which the oversized lure was more than a mouthful.  What is going on in the “mind” of a hungry northern pike is anyone’s guess, but the red/white color combo and lifelike swimming pattern of this lure being trolled at moderate speed (thus diving 4-6 feet) brought phenomenal results.  At one point, we trolled back and forth along the north shore of Colchester Pond and for 3 passes in a row we had the line go tight on this lure as it passed the point between the two bays that make up the northern shoreline.  Unfortunately, none of these fish broke 30 inches, but reeling in a northern pike of any size is fantastic when all you have to do is paddle on a beautiful pond.

After landing enough fish to justify our adventure on day one, we left the pond planning on targeting size over numbers the next day.  Forget all these little 24-28 inchers, we wanted something huge! For the second time of the trip, our high hopes fell to despair as the weather forecast predicted a cold front and even a frost advisory.  Forget about the fishing, the forecast was for a 38 degree night and we were camping and had nothing more than sweatshirts!  Knowing the fishing might be tough the next day, we hunkered down at our campsite in beautiful Grand Isle State Park and enjoyed the pleasures of a campfire and a warm meal in preparation of a cold night.  Our campsite was directly on the lake’s coastline, looking out over the lake with a direct view from the lean-to of Camel’s Hump Mountain and the sprawling hills of Vermont.  The facility was well-maintained and developed enough to be comfortable but still remote and woodsy enough to attain the entire quintessential camping experience. Nestled right on the shore of Champlain, the spectacular view was worth the trip. Sometimes the experience of the fishing trip, can mean just as much as the angling and payoff of a fish in the boat.

After a nippy night, we eventually motivated and, despite the cold, were most certainly not going to waste a day sitting idly when there were fish in the water. But based on the evidence at the end of the day…who would have even known this pond carried life.  Top-water, diving, red/white, chartreuse, lifelike, spinners, spoons- practically my whole tackle box was thrown at these suckers, with nothing in return.  We even ran to the nearby tackle shop at lunch and picked up some shiners to try to entice a hungry pike, we would have done anything to get one in the boat. Not one single fish all day, and as we were paddling back to the launch, of course I hooked up to a beast while trolling a Rapala floating stick bait with perch coloration on my light bass rod with 8-pound mono. It stayed hooked for about 5 seconds before the line was bitten by those dreadful teeth.  Dejected, we went to shore having lost our battle versus the northern pike for the day.

The wind was supposed to pick up for the third and final day of our trip, and we didn’t want to fish in a spot that had provided exactly zero fish the previous day.  After looking out on the beautiful view for two nights, the draw of Lake Champlain was strong, and we knew the wind would not be a problem on the leeward side of the causeway connecting Grand Isle to mainland Vermont. We packed up the campsite and headed off the island early that morning, and put in the canoe at Sand Bar State Park, just on the mainland side of the causeway.  As we got out on the water, the reed-bed shorelines looked enticing and the crystal-clear water revealed huge schools of perch swarming through the shallows, a sign of life that gave us hope.  What looked to be the perfect cove was cut off about halfway down by signs dictating that it was protected land and fishing, hunting, and trapping were prohibited.  In the moment this was disappointing, as you could practically see the fish lurking in the weeds of the pristine environment, but it made me happy to see that the state of Vermont was going to such effort to protect land for the future. We did shamelessly fish the unrestricted part of the cove, though, and within two minutes my dad hooked a gorgeous pike.

Nothing crazy in size, but fat as can be and with those cream-colored spots on the lower sides that really drive it home that you are catching something with more substance than the pesky chain pickerel.  Five minutes later, he hooked up to another one, and although in the same size range, it fought like a horse! I was getting jealous so I switched it up, using my bait caster to drop a black spinnerbait exactly where I needed to, right in the narrow pathway between two patches of reeds.  I brought it back almost 90% of the way to the boat when all of a sudden out of the perfectly calm, clear water came a huge gaping mouth to slam it and bust on the surface.  With barely one or two turns of the reel, I swung the Lake Champlain largemouth into the boat and successfully boated a fish after a demoralizing day the day before.  It wasn’t our targeted species, but I was elated all the same.  Now that we both had our groove back, the rest of the day went off without a hitch, landing northern after northern and enjoying a day that wasn’t nearly as breezy as predicted.  We had our fill and were able to head home early enough for dinner Sunday night.

We did not come home with a trophy pike, but we certainly left with memories of good times. Getting to spend that time with my Dad and struggling toward our goal of catching a big one together was a great way to spend the weekend.  If you enjoy the trip, then it was a success regardless of whether or not there is going to be a mount on your wall in the near future.  One day though… we’re going to get the big one.