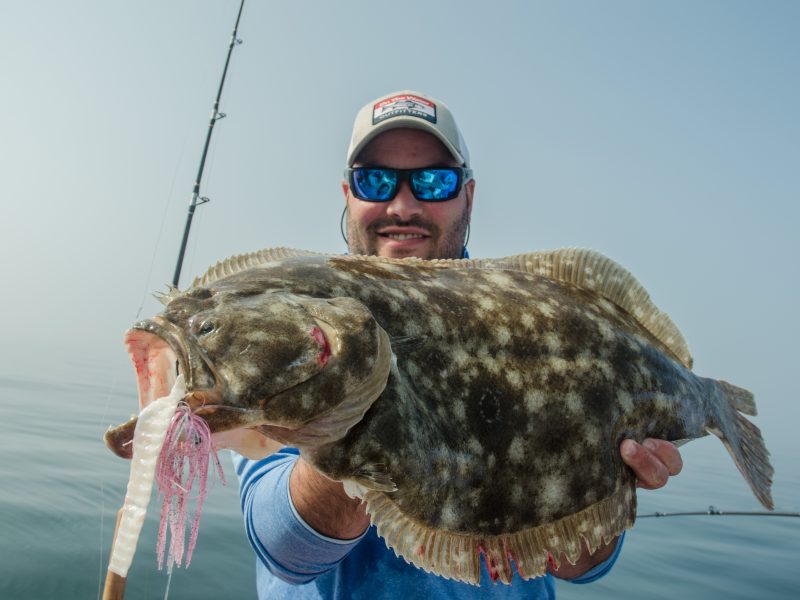 There’s been much written about how technological advancements have played a role in finding saltwater fish. There is side-scanning sonar for zeroing in on striper schools, real-time moving sonar images for ice- and freshwater fishing, and even bird-finding radar capabilities for locating tuna feeds. But, there hasn’t been much talk about how electronics factor into finding and catching fluke.

Based in Southern New Jersey, Captain Nino Aversa of the El Nino Saltwater Fishing Team trailers his Parker 2320 all over the Northeast hunting fluke and fishing fluke tournaments. This team of experienced anglers took home the $100,000 check at the 2019 Flounder Pounder Open in Delaware.

In preparation for tournaments, especially those outside his South Jersey home waters, Aversa studies the Navionics Boating USA app for info on structure, boat ramps, and even marinas and restaurants.

That information is loaded into Hummingbird Solix units. Aversa has three on the boat that are all networked and have the Navionics map card info displayed. That, in conjunction with chirp radar and 2D sonar, allows him to navigate unfamiliar channels in low-light conditions. Once he clears the harbor, he plugs in the coordinates of where he wants to fish.

Aversa is part of the growing number of Northeast saltwater captains who use an electric trolling motor to fine-tune his bottom fishing. “The trolling motor allows us to control drift speed and even hold us in place for a moment to get set before commencing a drift.”

Learn more about the chase for trophy fluke and the importance of boat control.

Aversa uses a Minn Kota Ulterra, which he pairs with his Humminbird Solix. Once he identifies the area he wants to fish, he plots the course for the Ulterra to create the drift. This setup also allows Aversa to perfectly reproduce productive drifts, even in changing wind and current conditions. By placing waypoints over areas with the most activity, Aversa and his team home in on productive areas and avoid drifting over empty bottom.

BELOW: Watch the El Nino Fishing Team use their electronics to dial in the Montauk fluke bite.

Whether back bay or open ocean fishing, Aversa uses a similar approach, though in the bays, he considers where other predatory species like striped bass might set up to feed. “Predators, regardless of species, like similar structure. I find bigger fluke in areas where I have also caught stripers.”

Captain Jeff Viamari of Bad Influence Sportfishing spends every fishable day from June to September on the sandy shoals south of Nantucket. While these waters have received a lot of attention as a doormat mecca over the past decade, many fishermen fail to realize that this area is not only vast, but the structures shift from season to season. To make matters more complicated, fluke also shift around the shoals throughout the season, moving in from offshore in the early summer and returning to the deep each fall.
The work Viamari puts into finding fluke, both on and off the water, has helped him guide dozens, if not hundreds, of fishermen to their personal-best fluke. More impressive than that, many (if not most) of those double-digit doormats swim free to fight another day, thanks to Viamari encouraging his clients to release the biggest fish.

Even being on the water on a near-daily basis, Viamari researches potentially productive areas every night at home using the Navionics app on his smartphone. He looks for areas with the same features as the areas where he’s been catching – depth, contours, and bottom composition.

On the boat, Viamari then uses his fishfinder to locate fluke—or more specifically, fluke-holding locations. While these bottom-hugging flatfish don’t “mark” on sonar, modern transducers can read the bottom composition pretty well, allowing captains to identify whether they’re drifting over hard or soft bottom. Those transitions, Viamari said, hold large fluke, so whenever he crosses one, he marks it, even if it doesn’t produce fish initially.

He also uses the sonar to double-check what he’s scouted on his charts. The sandy shoals of Nantucket change at a faster rate than the harder bottom around Block Island, Montauk, and the artificial reefs off New Jersey, so Viamari ensures his charts are reading correctly.

Having a reservoir of proven and potential locations to check has helped Viamari consistently find fluke on the shoals. As fishing pressure on the waters has increased, his off-the-water research and on-the-water scouting means he can move away from boats whose principle strategies for finding Nantucket fluke rely on using radar and binoculars to locate the fleet.

While Aversa focuses on shorter, targeted drifts, Viamari likes stretching them out, looking for pockets of fish over wider areas. Of course, Viamari saves his scouting for when the fish box is full.

Vimari’s final advice was to not overlook the small stuff, that is the tiny holes, edges, or bumps that many fishermen miss. With side-scanning sonar, Viamari says, it’s possible to see these smaller structures that have big potential, especially the ones that don’t appear on any charts.

Aversa advised that fishermen who want to use their electronics to find more fluke (or any species) must take the time to truly learn the features of their machines. Electronics are a significant investment for fishermen, and far too many don’t use them to their full potential.