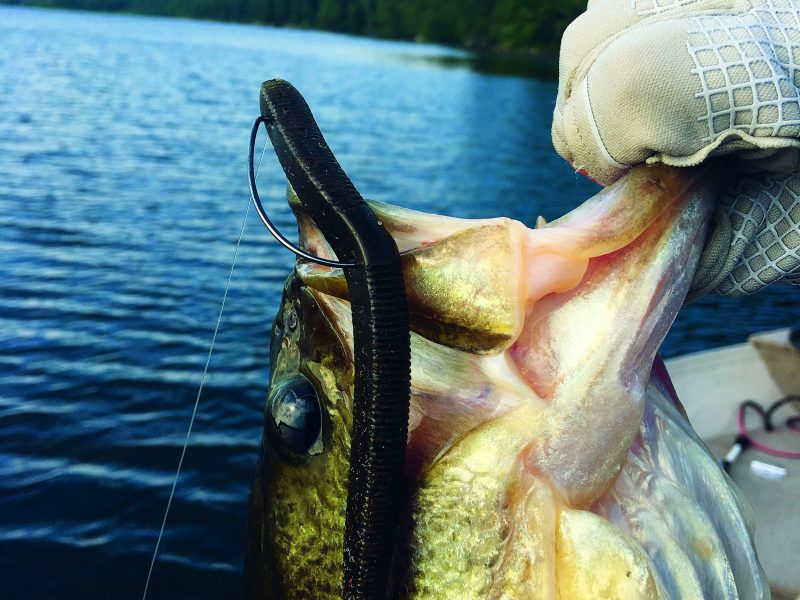 I’ve never been a big-bait/big-fish kind of angler. I prefer using finesse tactics to catch numbers of largemouth bass as opposed to holding out for a few quality bites each day. However, that changed two summers ago during a day of fishing with a young tournament angler on the Connecticut River. A very slow morning bass bite pulled us in completely opposite directions, with me downsizing to a 1/8-ounce jig and my young friend pulling out a pack of Zoom Ol’ Monster Worms. I grinned, thinking he had watched one too many southern fishing shows. An hour later, my smile was gone after he boated his fourth 3-pound-plus largemouth while I’d caught one small bass.
While I still don’t universally subscribe to the big-bait/big-fish school of thought, I have made an exception for largemouth bass, and big worms have a place in my tackle bag whenever I’m targeting this species. Of course, “big” is a relative term. In this case, it’s a 10-inch (or larger) traditional worm or a slightly shorter one with a beefy profile, like a Hags Tornado F8 or a Z-Man FATTYZ.
Unlike some big-bass-producing lures, such as large swimbaits, big worms are amazingly adaptable and can be fished just about anywhere you would throw a smaller bait using a variety of techniques. Shallow, deep, and anywhere in between, during several seasons and while using numerous techniques—what’s not to like? 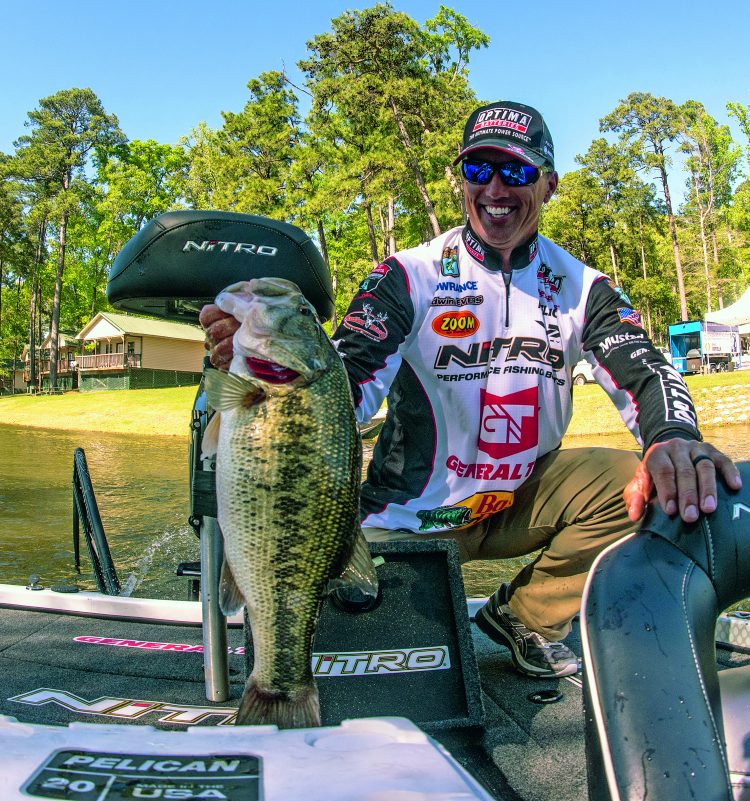 Not a thing, if you ask Edwin Evers. A professional bass angler in Talala, Oklahoma, Evers is an 11-time B.A.S.S. winner, including the 2016 Bassmaster Classic. Asked why he fishes big worms, Evers replied, “Lots of times, especially when fishing in the Northeast, there are so many bass of so many sizes. Big worms help cull out the smaller fish you aren’t looking for. They’re a bait a lot of weekend guys don’t use and something that bass don’t see every day.”
Kaleb Brown, a 16-year old bass tournament angler from Massachusetts who spent last summer winning or placing in almost every adult tournament he fished, is also a firm believer in these worms. “Big worms are one of the most versatile big bass baits out there and I throw them in almost every situation,” said Brown. “They accounted for the majority of the largemouths over five pounds that I caught last summer.” 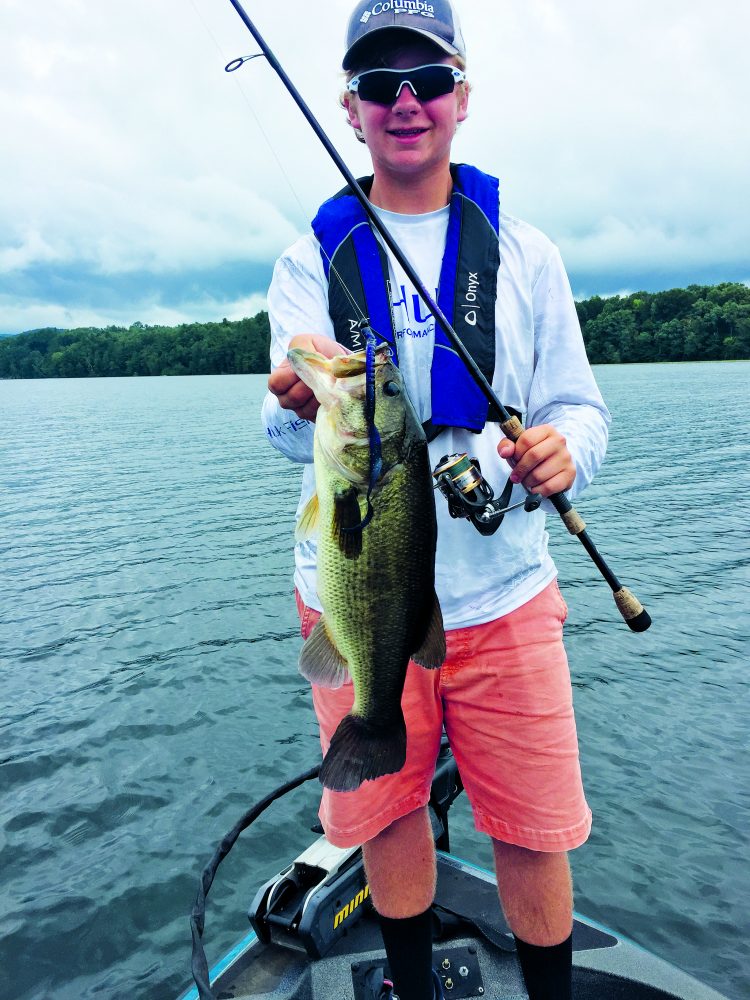 Where to Fish Big Worms

A great benefit of big worms is they work well in the same places one might throw a plastic bait—along shorelines, on humps, in deep channels, and around structure in 1 to 50 feet of water. The possibilities are endless. Evers fishes them around submergent and emergent vegetation, downed trees, docks, and rocky shorelines. Brown focuses on similar locations, but also targets bridge pylons and drags worms across flats to locate fish. I have often used these worms in the Connecticut River and found rocks, fallen trees, edges of milfoil stands, openings in lily pad beds, and steep drop-offs leading to the main river channel from vegetated shorelines to be productive areas for quality bass.

Evers keeps it simple when fishing a big worm, Texas rigging it on a 5/0 Mustad hook. I use several techniques in addition to the Texas rig, including drop shots, jigs, and Carolina rigs. Drop-shotting big worms in open water works well, but I find this technique excels around structure. Strong braid like Sufix 832 Low-Vis or Berkley Fireline Ultra 8 in 20-pound test combined with a 15- to 20-pound fluorocarbon leader is a must in these situations to prevent big bass from breaking off in heavy cover. For hooks, a VMC Spinshot Wide Gap in 3/0 or 4/0 minimizes line twist. When working a drop shot near heavy cover, I Texas-rig my worms to minimize snags.
I believe jigs are an underused tool for delivering big worms and definitely give the bass something they’re not used to seeing. Ball, shakey, football, and standup head jigs are all good choices, depending on the habitat you are fishing. Make sure your jigs have hooks large enough to accommodate big worms.

Carolina rigs are another great way to present these large baits. Besides upsizing your hook and experimenting with leader length and weight size, I fish these as I would a regular-size bait. Depending on the time of year, offshore cover, humps, points, flats, and even shallow water can all be productive locations. A Hags Tornado F8 works well using this technique because it has a rattle chamber in the tail that, when left empty, traps air for extra buoyancy.
Like Evers, I find Texas rigging a big worm to be both productive and versatile. Combined with the correct tungsten weight style (flipping or worm) and size, you can flip, pitch or cast these baits to anything from heavy cover to docks to open water. I typically use a 4/0 Gamakatsu EWG or Trapper Offset Wide Gap hook; around heavy cover, I employ a 15- to 20-pound fluorocarbon leader combined with a strong superline, such as Seaguar Flippin Braid or Spiderwire Stealth Smooth Braid. Evers shared that he swims, hops, or drags his worm back to the boat depending on the day and location being fished. He uses 17- to 20-pound fluorocarbon when casting and uses braid when flipping.

Ryan Oster, a former state fisheries biologist for Kentucky Lake who is no stranger to big worms and hefty largemouth bass, put it best when he told me, “Compared to the few companies who used to make big worms a few years ago, there are lots to choose from these days.” Oster’s favorites include the Berkley Powerworm, Culprit 10-inch worm, Netbait Super T-Mac, and Zoom Ol’ Monster. As for colors, Oster says you can’t beat plum or red shad.
Evers’ favorite big worm is the Zoom Ol’ Monster; he uses green pumpkin in clear water and red shad in dingy water, though added that black emerald is also a go-to color. Several big worms worked for me this past year, including several from Zoom (Ol’ Monster, Mag Ol’ Monster, Mag UV-Speedworm, and Magnum Trick), Hag’s Tornado F8, Z-Man FATTYZ 7.25-inch, and the Berkley Powerbait 10-inch Powerworm. Favorite colors of mine are blue-black, green pumpkin, and watermelon, although I try to match the prevalent baitfish forage. A particularly good producer last year was a Hag’s Tornado F8 in bluegill.

Evers said he fishes a big worm regardless of weather conditions, but thinks that a big worm is best in summer and fall. Both Brown and I have done well with these baits from post-spawn to late fall in the Northeast. I have heard that some anglers had success with big worms fished slowly during cold-water conditions. If you don’t already use them, get over any bigbait/big-fish prejudice you might have and give big worms a try this year for largemouth bass. With multiple options for techniques, locations, and seasons, they are a great way to put big bass in your boat.