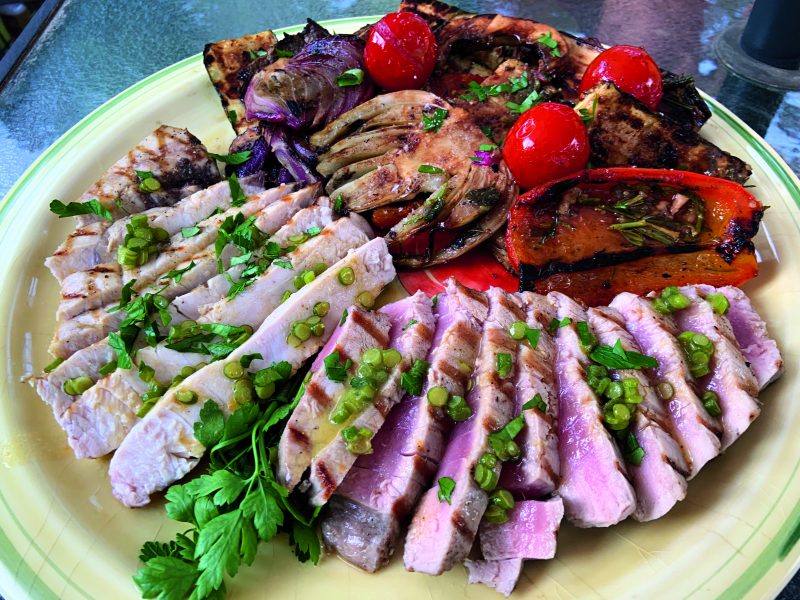 The other day, I pulled off one of the best trades of my life. In return for one gallon of lettuce from my garden, eighteen sugar snap peas, one lemon cucumber, and six garlic scapes, I received a two-pound hunk of bigeye tuna, a large piece of bigeye toro, and two glorious swordfish steaks. Oh my!

The deal was made with my friend, contributing OTW writer Larry Backman. Larry is one of the most successful offshore fishermen I know, and in the past few years, he has become particularly adept at deep-dropping for swordfish during the day.

Fresh swordfish is, hands down, my favorite fish to eat. Yellowfin tuna used to be my number two, but bigeye is now my second pick. As far as I know, these are the two “meatiest” fish in the sea.

One might think that Larry got the short end of the stick on our trade. But Larry, like me, prefers to know exactly where his food comes from.

Aside from fishing and hunting, gardening ranks high atop my long list of obsessions. I take great pride in the crops I grow, and I put a lot of time, effort, and money into my vegetables. I grow everything 100 percent organically and spend countless hours in the summer tending to my crops, protecting them from free-loading critters that like to eat them as much as I do. There is something particularly satisfying about growing a plant from seed, nurturing it, and then eating it.

Just as with this fish, the fresh stuff, right from your backyard, is way better than anything found in the supermarket. Growing your own food is not difficult, but just as with fishing, there is a lot to learn. But the learning, I find, is the fun part.

Thanks to my garden, and to Larry, I was rewarded with enough fresh fish to eat for a week so I experimented with a couple of new recipes. Some were great, and some were total duds. Following are the good ones.

Juice from 1/2 an orange

Parsley and/or basil, chopped, for garnish

Melt 1 tablespoon butter in a small saucepan and add the garlic. Sauté on low heat for about 3 minutes until it just starts to soften. Add remaining butter, orange juice, salt, and pepper. Remove from heat when butter is melted.

Cut the vegetables into rustic slabs about ½-inch thick, mix with remaining ingredients, and stir well. Grill on medium heat until cooked through and slightly charred.

Get your grill as hot as you can and clean the grates well. Generously salt and pepper both sides of the steaks. Add the oil to a shallow bowl, and dip one side of each steak into it. Allow excess oil to drip off. Fire the steaks, oil side down, onto the grill.

For swordfish, cook over the hot side of the grill for about 2 minutes, rotate it 45 degrees, and then cook for another minute or two to get some glorious cross-hatched grill marks on it. Brush with oil and flip it over and finish over the cool side of the grill, undisturbed, until it registers 130 degrees in the thickest part.

For tuna, shorten the cooking time to about 90 seconds for the first side, brush with oil, flip it, and cook on high heat until it reaches 75 to 80 degrees in the thickest part.

To serve, artistically arrange the grilled vegetables on a platter. Whisk together the butter sauce, heating it up slightly if it has hardened. Cut the fish, across the grain, into thick slices. Stack the fish on the platter, drizzle with the sauce, and garnish with parsley and basil. Mangia!

The following night, my wife Susan took over cooking duties and made the following dish. I was skeptical at first, figuring the amount of wasabi peas would burn my face off. It came out much milder than I initially anticipated. This is a solid recipe.

While I love the convenience of my gas grill, when it comes to grilling seafood, my trusty old Weber kettle charcoal grill is my weapon of choice. Gas grills max out around 500 degrees. Charcoal, on the other hand, can get well north of 650 degrees. To get good sear marks on seafood without overcooking, you want as much heat as possible.

No self-respecting BBQ pitmaster would be caught dead using lighter fluid to start charcoal because it can impart an unpleasant chemical flavor to your food. Also, it ignites the coals from the top down, which means it takes longer to get them going.

Instead, a charcoal chimney is the proper tool for this task. Start by lighting a paraffin wax cube. Place it in the bottom of the chimney, and then fill it up with charcoal. After about 15 minutes, the charcoal will be red-hot about halfway up the chimney, meaning it is ready to hit the grill.

In the world of BBQ, there has been much debate as to which is better. Both have their pros and cons, but at the end of the day, the answer is that it doesn’t really matter.

Lump charcoal, which tends to be more expensive, can burn slightly hotter than briquettes, but this also makes them burn out more quickly. Because they come in varying sizes and shapes, their burning behavior is less predictable.

Since they are made from sawdust, briquettes produce more ash than lump charcoal, which some people consider a con. As far as pros go, they are easier to stack for a consistent heat source. They are also cheaper than lump, and if you go by weight, you get a lot more heat per bag.

The bottom line is that charcoal is for heat and adding a touch of smoky flavor. Your main ingredient, and the way you season it, is far more important.

For years, I have used good old Kingsford briquettes. I recommend sticking with one brand so you learn its nuances, and instead focus your attention on the main course.

Add the coals in an even level to one side of the grill, leaving an open spot on the other side. Use a pair of tongs to place the darkest, uncooked charcoal on the top of the pile.

Leave the grill uncovered and wait until the charcoal is about 80% white. At this point, the fire will be at its maximum heat. Start by cooking your seafood over the hottest part of the grill to get a good sear, and then finish cooking it on the cool side. DO NOT attempt to get good grill marks on both sides because it will be completely overcooked.