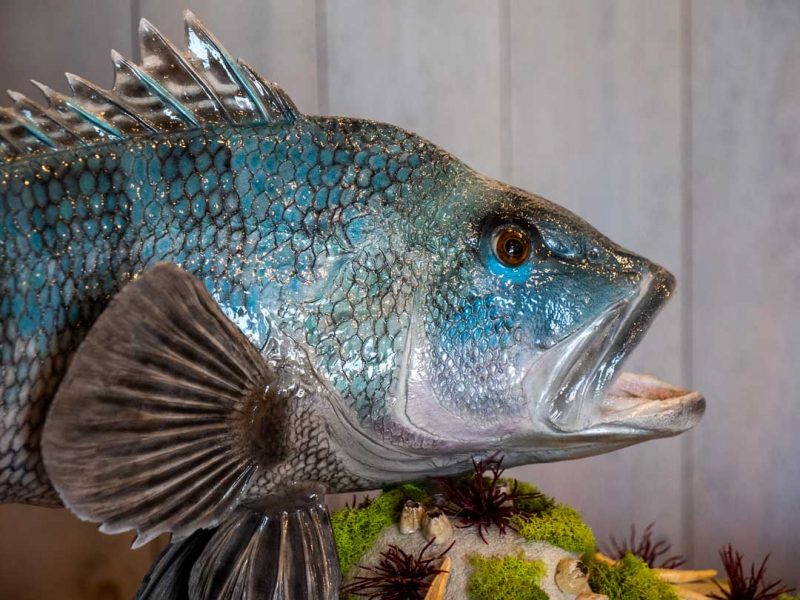 I’ve always wanted a black sea bass mount. I’ve been fortunate to catch three particular fish that outranked all of the rest and had submitted each of them into the Massachusetts Saltwater Fishing Derby that the Division of Marine Fisheries runs each year.

For a catch to be qualified, it must be weighed in at an official weigh station, or if it’s caught and released, submitted for the catch & release category. Most MA local tackle shops with certified scales are registered weigh stations. 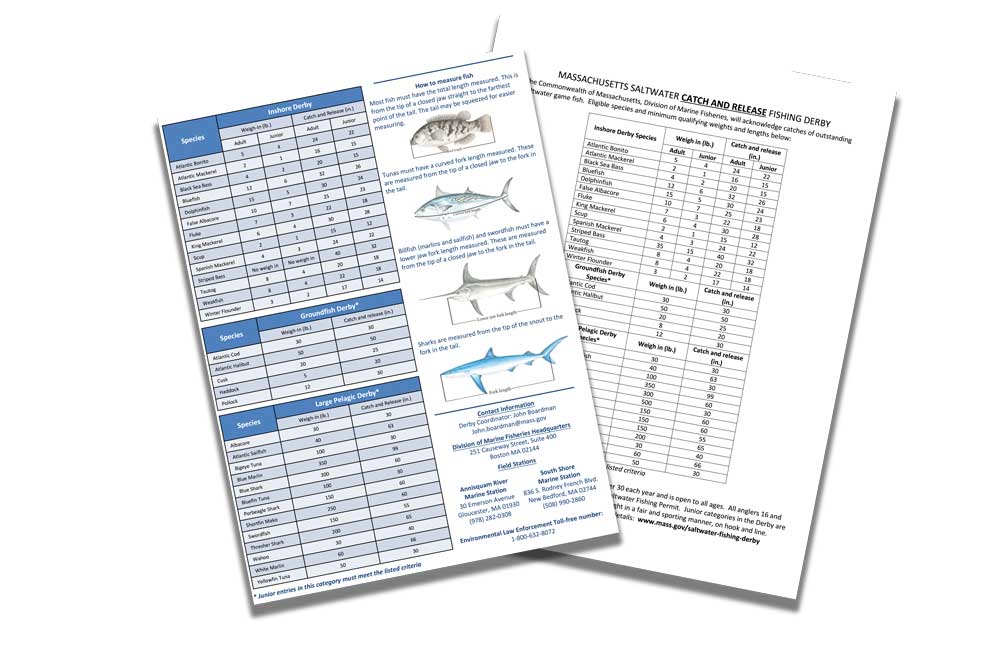 Once you confirm you’ve met the qualifying weight or length, you simply follow the instructions for the respective category you’re entering. A kept fish must be weighed at an official weigh station where the weigh master can download the form to fill out, sign and send you on your way with all you need to submit your entry in the derby in the weigh in category. A catch & release entry must be submitted along with a photo, with your fish measured correctly for that species with the measuring device visible in the photo along with the affidavit form filled out. 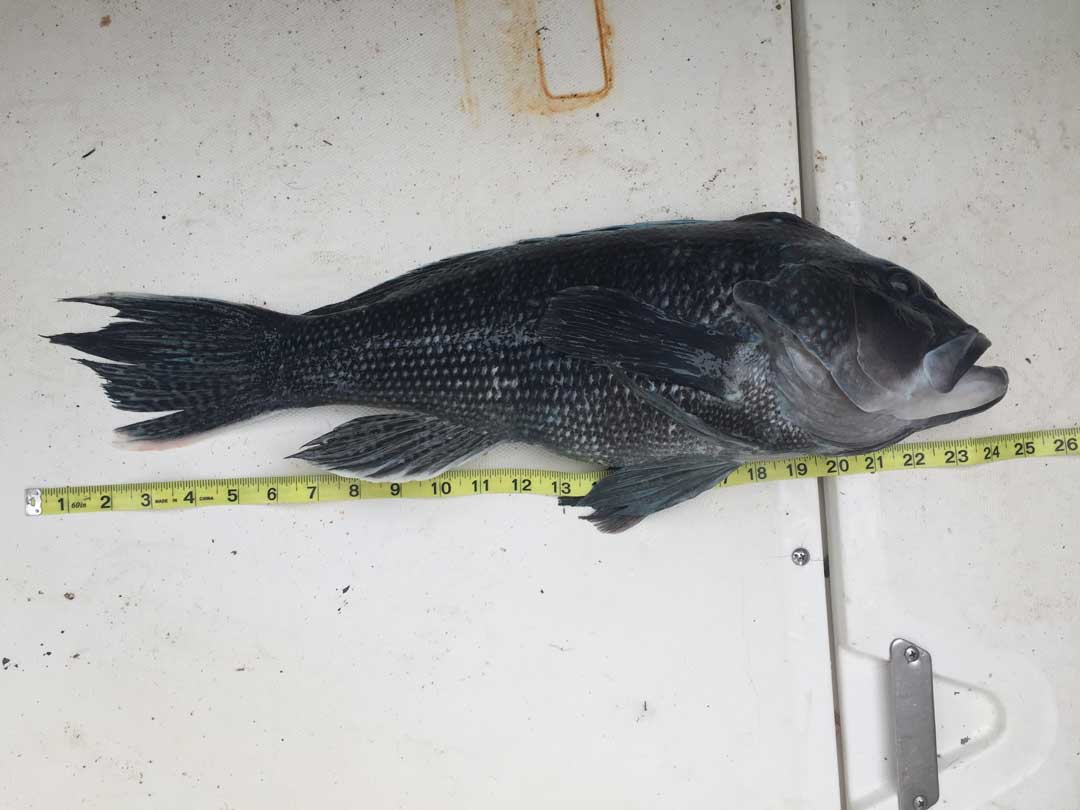 A qualifying entry in either division guarantees you a State Pin from the Division of Marine Fisheries, which are pretty cool collectibles to commemorate your catch. However, as the derby comes to a close, the top entries in the Men’s, Women’s & Youth division for both the weigh-in category and the catch & release category are recognized for submitting the heaviest or longest fish for each species. If you’re lucky enough to stay on top of the leaderboard when the derby comes to a close, you’ll be notified by the state and will receive a certificate along with a plaque commemorating your accomplishment. This type of state run derby is done every year in many states in both freshwater and saltwater and makes for a pretty cool collectible as you submit “pin” fish, while also seeing how your catch stacks up against all other fish entered that year with a shot at taking top honors.

Although the state derby is a lot of fun to participate in, I really wanted something a little more when it came to my personal best Sea Bass. I really didn’t want a run of the mill reproduction that was generically painted and mass produced, so I reached out to a few people in the know in search of a local taxidermist that were recommended to me. I left a couple voicemails and didn’t get a return call. Then one night I couldn’t sleep (probably because I had a fishing trip planned the next morning), I was scrolling on Facebook and came across a post on a fishing group of a video that showed a unique mount of 40”+ striper suspended over a sandy bottom angled down about to eat a winter flounder. My jaw hit the floor when I saw the detail of the paint job and overall scene that was so unique. I messaged the author of the post who turned out to be Jeff Henderson from Catch & Release Artistry as it was a video of his work. The next morning I woke up to a reply and we got talking about a potential commissioned sea bass pedestal scene.

I told Jeff I really wanted to do a sea bass, but that I wanted it painted a certain way. I wanted it painted up in their full spawn colors, but lighter like they come up when caught in the rips over a sandy bottom. My thought process was that if this scene was going to be over a sandy bottom, I’d want the piece to be as realistic as possible. I sent him some shots of the color patterns from pictures I had of other fish that would give him an idea of the paint job I wanted as well as the dimensions of the size fish I wanted to commemorate; a 24.5” sea bass I caught and released that was in the six-pound range. Once that was out of the way we started talking about the scene I wanted. I told him I wanted rocky landscape with sand around it – and I wanted the sea bass going to eat a lobster or crab similar to how he had that striper prepared to engulf a winter flounder. 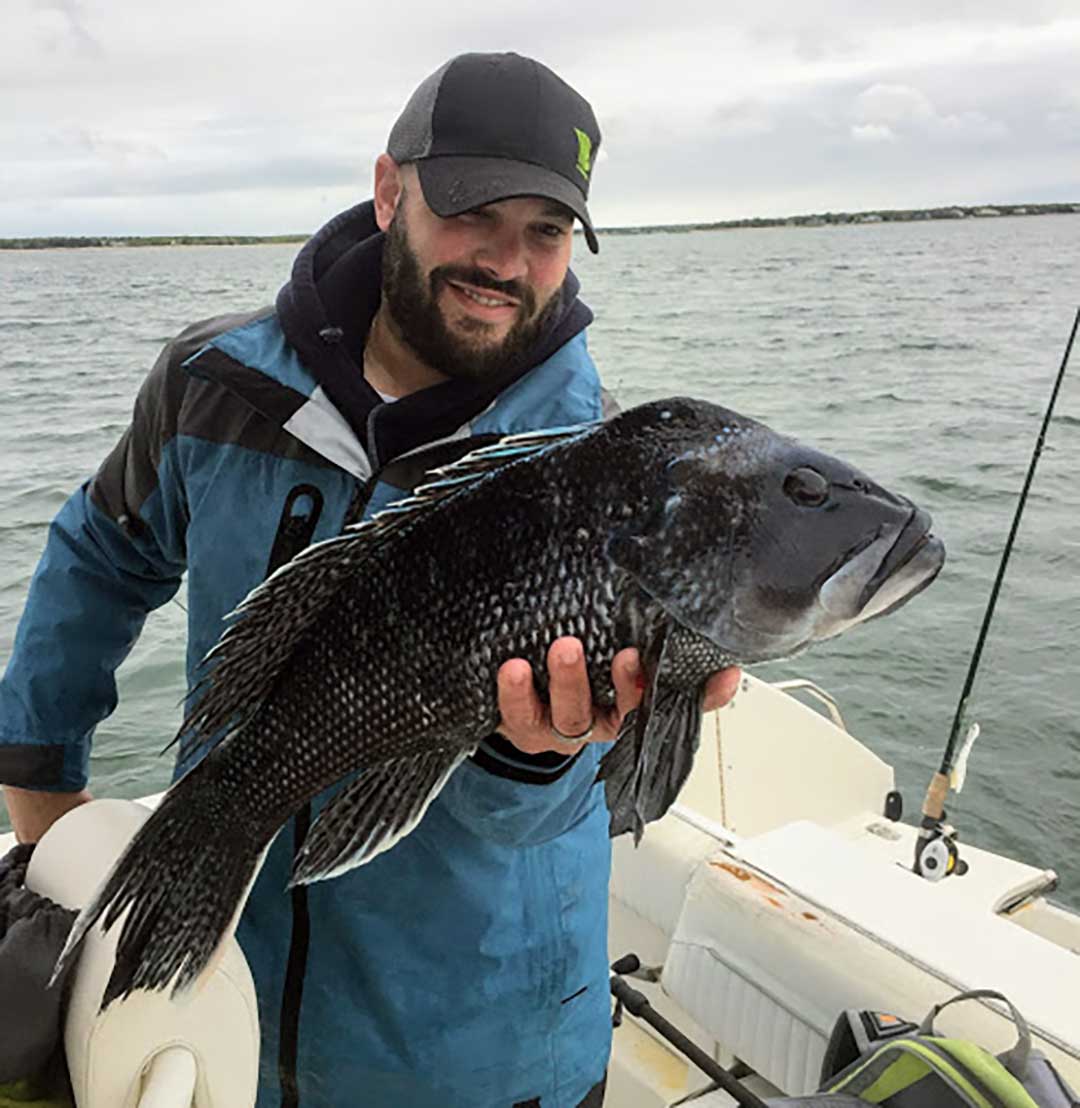 Jeff gave me a quote and I went ahead with the project. He told me it would take about 4-6 weeks due to his current workload and I couldn’t wait to see how it would come out! Jeff, being the perfectionist that he is, received and returned 2 sea bass fiberglass blanks that just didn’t live up to his demands. The third blank passed his criteria and he got to work on the custom paint job and pedestal mount. I was like a kid anticipating Christmas watching the calendar slowly crawl to the first date within the window he gave me. Just before we got to that date, I got a text from Jeff that he was just finishing it up and sent me a sneak peak and I couldn’t believe my eyes! Now I really couldn’t wait until he brought the mount to my office! When he showed up, he told me he brought some other work he’d done and I grabbed my co-worker Andrew to take some shots of what were all amazing works of art!

Jeff has been doing hand-painted fiberglass reproductions for 30 years. He resides in Rhode Island and paints each piece in amazing detail, scale by scale. The detail in his paint jobs is simply remarkable and given the fact that after a piece is painted up to his standards, it gets multiple coats of clear polyurethane which preserves the paint job looking as new as it did when the paint first dried forever. If doing a pedestal mount scene, he switches “hats” from expert painter to paper Mache sculptor. He gathers all the materials he wants to use and builds out the scene to recreate the natural habitat the species he’s doing is found in. In my case, he literally scraped barnacles off of local marina floats that happened to be out of the water in preparation for spring with extreme care to use them on my rocky base he made out of paper mache.

When I first laid eyes on my mount, I was blown away with how well he delivered on what I had wanted. The detail and coloring was amazing, and the way the fish’s eyes were fixated on a blue crab it was about to eat was extremely lifelike. From the barnacles on the rock the fish was suspended above to the two types of seaweed used on the rocks along with a shell strewn sandy bottom; the scene was amazingly realistic. To be able to commemorate such a special catch that was released to fight another day is a special thing. It’s one thing to have a great photo, and even a pin, plaque, and certificate from the state acknowledging the catch as the top entry that year, but now I have a handmade piece of artwork commemorating my personal best sea bass to admire for the rest of my life.

Jeff Henderson of Catch & Release Artistry can be reached through his Facebook page or by phone at (401) 442-1269.