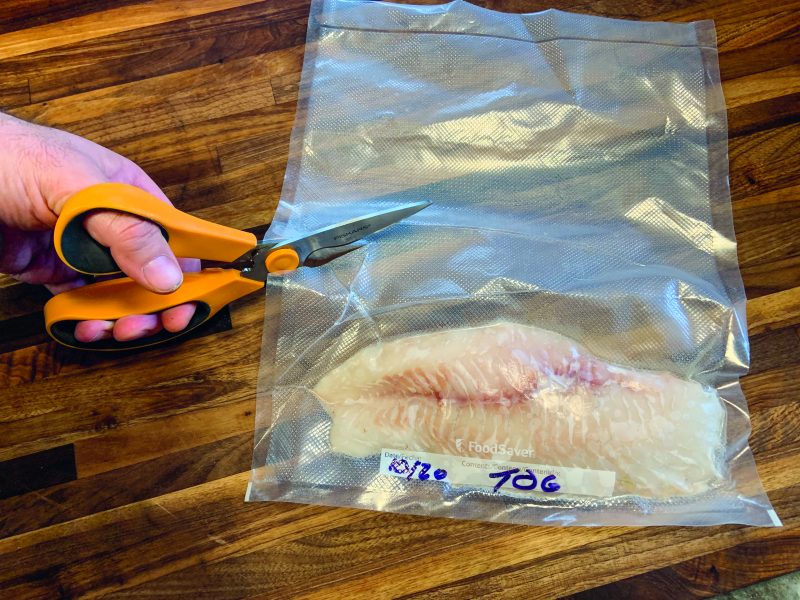 With the new fishing season knocking on the door, I recently conducted an inventory of my frozen cache, and I decided it was time for some serious spring cleaning.

Throughout the winter, I managed to put a good dent in my frozen fish supply, but two packages of yellowfin tuna scraps, two bags of tautog/sea bass fillets, and three small packages of blue crab meat had somehow survived.

Generally, I try to avoid freezing fish for more than six months. Even if carefully vacuum sealed, I think the taste and texture rapidly decline after that amount of time. I have become somewhat of a frozen fish snob, and if it survives in my freezer the past six months, the odds of me actually eating it diminish substantially. So, March has officially become the month of reckoning for any fish in my freezer. It’s now or never, so out with the old, in with the new!

Fresh fish is ideal for simple preparations that highlight the true flavor of the fish. With frozen fish, I prefer to bedazzle it with bold and/or spicy flavors that will mask any “off” flavors.

Our first recipe is a variation of Mark Bittman’s salmon croquette recipe from his cookbook, the simply titled Fish. Bittman, a former food columnist for the New York Times, is a renowned authority on all things seafood. This recipe is a true testament to his fish-cooking prowess.

Cut the potatoes into 1-inch cubes and boil in salted water for 12 minutes. Drain, mash them up, add butter and milk. Stir in the minced onion (or scallions), parsley, garlic, eggs, mustard, then season with salt and pepper to taste.

Next, salt the thawed fish and steam it using water that has been spiked with a few lemon wedges. Steam for about 6 minutes until it registers at least 140 degrees. Crumble up the fish and carefully fold it into the potato mixture. Do not overwork it – you want to leave some decent-sized chunks.

Next, stir in some breadcrumbs until the fish/potato mixture is firm enough to handle. Place about a cup of breadcrumbs on a plate. Form enough mixture into a ball about the size of a lime, and then press each side into the breadcrumbs, forming a patty, making sure it is completely coated. Repeat with the remaining mixture.

Line a tray with a thin layer of breadcrumbs and place the patties on them. Sprinkle some more breadcrumbs on top and refrigerate for about 45 minutes. (Once the quettes have chilled, it will be much easier to shape them.) Press them down until they are about an inch thick and round them out. Return to refrigerator until ready to cook.

Preheat a large cast-iron skillet on medium heat until the handle is hot to the touch, about 8 minutes. (If using a non-stick pan, preheat for 3 minutes.) Add the oil and let it heat up until it starts to shimmer. Carefully add the croquettes, and fry on both sides until golden brown. (You will need to spin and rotate them as they cook to get even browning.)

Garnish with a tad of fresh parsley and sprinkle with Kosher salt. Serve with hot sauce, lemon wedges, and a dipping sauce of your choice.

1 ½ pounds fish of your choice

Place all of the curry sauce ingredients in a food processor (or blender). Process well to form a sauce, then pour it into a large frying pan. Cook on medium heat and bring to a gentle boil, then stir in the mushrooms and green beans. Cover and simmer for 8 to 10 minutes or until the vegetables start to soften.

Next add the fish and tomato. Continue simmering until fish begins just begins to flake, then grab a spoon and give it a taste. Add more fish sauce if it’s not salty enough; add more sugar if it’s too sour.

Place 1/2 cup of rice into each bowl, then top it off with piping-hot fish curry. Garnish with chopped cilantro and lime wedges. You will be delighted with bold, earthy, spicy flavors.

The other night, my wife decided to use some of my frozen crab meat to make crab-stuffed ravioli. They were fantastic. Making homemade pasta is a labor of love, but the results are well worth the effort.

For the dough: Whisk flour and salt together, then place it on a board, making a depression in the center. Drop eggs into the flour and use a fork to break the yolks and briefly beat them.

Gradually combine the eggs and flour together, and slowly add the warm water to make a stiff dough. Knead the dough well, until smooth, then cover and let rest for 20 minutes. Cut dough into six equal pieces. Roll each piece into a very thin sheet about 1/16 to 1/8 inch thick. (Or run it through a pasta press, starting at the thickest setting, and then gradually bringing it down to the second-to-last setting.)

Place a sheet of dough onto a ravioli press and push the template into it to make indentations. Plop about a teaspoon of filling into each depression, top it off with another sheet of dough, and use a rolling pin to seal the edges. Invert the ravioli press over a flour-coated baking pan and push the ravioli out. Cover with a towel and let rest for at least an hour. Meanwhile, mix marinara sauce, light cream, and white wine together in a pan, heat up, then set aside.

Bring a large pot of salted water to a slow boil. Boil your ravioli for about five minutes, then drain. Plate them and cover them with the sauce. Garnish with a bit of Parmesan cheese and some fresh diced parsley. To die for!

Our final recipe comes from OTW reader Mark England. He recently sent me a kind email about my January column on mastering pan-fried fish. After reading it, he purchased an electric skillet and a pair of Dexter fish spatulas. For his first attempt, he masterfully fried up some cod fillets and constructed a “Cape Cod Rueben” sandwich. Mark says he learned about this fine creation from Captain Parker’s Restaurant in Yarmouth, MA.

Hands down, a classic Reuben is my favorite sandwich of all time, so I think Mark’s idea is brilliant! I recently gave it a go with the last remnants of tautog fillets that were lurking in the chest freezer. It was outstanding!

Pan-fry the fillets and sprinkle with salt. Place a layer of cheese on a slice of bread, then add the fish. Top the fish with coleslaw and a liberal amount of Russian dressing. Add another slice of cheese on top and cover with the second slice of bread. Butter both sides of the bread and place the sandwiches in a large skillet on medium-low heat. Cook both sides until nicely toasted and the cheese melts. Cut in half and serve with potato chips or fries. Magnificent!