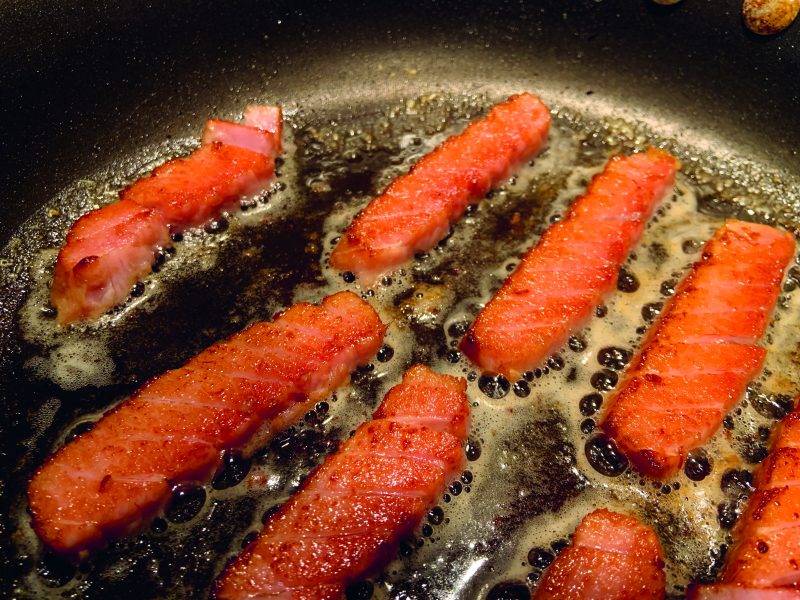 “Eureka!!!” I yelled it out loud. In the world of cooking, it is extremely rare to actually invent a new recipe. Over the course of time, mankind has combined just about every mix of ingredients imaginable. Coming up with a truly unique recipe is as rare as catching a brown-bellied flounder. What follows, I believe, is my first true culinary breakthrough.

One of my favorite parts of writing this column is the homework that goes along with it. I am always looking for fresh ideas and constantly trying new recipes, which forces me to think outside the box.

A few months ago, while making the brine for a venison corned beef, I began pondering combining Prague powder (a crucial ingredient in corned beef) with seafood. Curing meats like pork and beef with nitrates is common practice, but I had never heard of anyone doing it with fish.

I went online and sifted through over 20 pages of Google search results. I could find no mention of using Prague powder to cure seafood. I refined my search and managed to find just a single mention: it was a recipe for cold-smoked salmon. (Cold-smoking fish is a complicated process and not recommended for home chefs, since the fish isn’t cooked, and if done improperly, it becomes a breeding ground for bacteria, most notably, botulism.)

My curiosity was piqued. I once tried eating a piece of commercially-made salmon “bacon,” which was just smoked salmon belly, and it wasn’t very good. But what would happen if I cured a piece of tuna belly with Prague powder, just like bacon? Tuna belly meat, or toro, is one of the fattiest pieces of fish in the sea. I decided the next time I came across a big hunk of toro, I would perform an experiment, and attempt to baconate it.

Back in early July, I was gifted a large piece of bigeye tuna toro. I was also given a few bigeye steaks and two choice swordfish steaks. With enough fresh fish to last me a week, I decided the timing was perfect to conduct my experiment.

I treated the toro exactly the same way I cure pork belly for bacon. I created a brine and let it soak for four days. I had no idea how the sodium nitrate would react. Every time I opened the refrigerator, I questioned whether I had made a mistake. It was quite possible that I was ruining a perfectly good piece of fish and cultivating a total culinary disaster.

Prague powder #1 is a combination of sodium chloride (salt) and sodium nitrate. Curing salt, or pink salt, is sometimes called Instacure, and is a magical ingredient. Do not confuse it with Himalayan pink salt, which is nothing more than over-priced salt.

Aside from bacon, it’s used in a variety of common food products such as ham, bologna, pastrami, corned beef, hot dogs, and a whole bunch of other tasty, processed meats.

The sodium nitrate is what generates that lovely pinkish hue in cured meats. It speeds up the curing process substantially, and it also greatly extends the shelf life of the finished product.

A little bit of this stuff goes a long way–just one tablespoon is enough to cure five pounds of meat. For some reason, most supermarkets don’t carry it, but you’ll have no trouble finding it online.

I timed my experiment so that I could perform step two, smoking, on a Saturday. Smoking fish is a bit of an ordeal, and it can take three to four hours to complete. Since I had only have one shot at this, I wanted to babysit the smoking process as much as possible.

I smoked that sucker to perfection and let it cool to room temperature. I cut off a piece and nibbled on it. It was one of the best pieces of smoked fish I’d ever eaten. It had a taste, and texture, that reminded me of a very tender piece of ham. I cut off a few slices and fired up a frying pan. Hmmmm… I thought to myself,

I bet frying it in some butter will make it even better. So, that’s what I did. It fried up just like real bacon; it smelled just like real bacon. It had absorbed quite a bit of sugar in the brine, so it caramelized nicely and came out crispy. I let it cook, and then took my first bite.

Eureka! It tasted very similar to bacon! I could tell it was fish, but it didn’t taste fishy at all. Tender on the inside, crispy on the outside, it was packed with bacony flavor and melted in my mouth.

Mix all the ingredients in a large lidded container until everything is dissolved, then add the toro. Refrigerate for 4 days, shaking it occasionally to keep it well mixed.

Remove the fish, rinse well under cold water, and dry it off with paper towels. Place it on a wire rack and refrigerate for at least an hour. (This step is important, so don’t skip it. The fish needs to dry out and form a layer of pellicle (film) on the outside before going on the smoker.)

Fire up your smoker following the manufacturer’s instructions. Smoke the fish at 175 degrees for just over a half hour, using a good amount of cherry wood for the smoke source. Keep a close eye on the internal temperature and pull the fish when it hits 110 degrees. Allow it to cool to room temperature.

Feel free to pig out on it right out of the smoker, but if you really want make it yummy, fry it up in butter until the edges crisp and it turns golden brown.

That night, I fried up some more and made a killer bigeye BLT. The following night, it was served over pasta.

Pasta carbonara is a rich, simple, traditional Roman dish that is usually made with pancetta or guanciale (cured pork jowl). My wife, Susan, made a batch using the tuna bacon. It was divine!

1 pound spaghetti (or bucatini or fettuccine)

Salt and black pepper to taste

Bring a large pot of water to a vigorous boil. (I add 1 tablespoon salt for every 2 quarts of water).

Heat the olive oil (or butter) in a large sauté pan over medium heat. Add the tuna bacon and cook until browned on both sides, then remove and set aside.

In a small bowl, beat the eggs and mix in 1/2 cup of the Parmesan.

Cook pasta until al dente and drain, reserving some of the cooking water. Quickly add the cooked pasta to the sauté pan. Add about two tablespoons of the pasta water to the bowl with the eggs, and whisk. Pour the egg mixture in with the hot pasta, stirring well. The heat from the pasta will cook the eggs, resulting to a creamy sauce. Add more pasta water, if necessary, to thin the sauce. Give it a taste, and sprinkle with salt and pepper as needed.

Dump the pasta into a large bowl, then decorate it with parsley and the remaining cheese. Top it off with the tuna bacon and dig in!

While we’re on the topic of Prague powder, and with hunting season just around the corner, I figured I’d share my all-time favorite way to prepare a venison roast. If you are a bad deer hunter like me, you can substitute a beef brisket for the venison roast, and it will come out even better.

Venison is much leaner than beef, but the corning process tenderizes it substantially, resulting in a final product that tastes very much like the corned beef you get at the deli.

Once you try this, you will never grind up a deer neck roast into burger again! I bet this would also work with duck or goose breasts.

Add all the spices (except the garlic and brown mustard) to a frying pan and toast them on medium-low heat until they become fragrant, about 3 minutes.

Mix the salt, Prague powder and brown sugar in with the water and stir well until it’s all dissolved. Add the spices and garlic. Pour the mixture into a large lidded container and add the roast.

Pop it into the refrigerator and let it soak for at least 4 to 5 days. Give the container a good shake at least once a day to keep the brine well mixed. Remove the roast from the brine and give it a thorough rinse under cold water. Dry it off with paper towels and rub it with the brown mustard. Give the top a sprinkle of black pepper.

Wrap your roast tightly in aluminum foil, place it in an ovenproof pan, and bake it at 350 degrees for 1 hour per pound. (For many years, I boiled the meat, but I’ve since learned that baking it in the oven produces a superior finished product.)

Remove from oven and let it rest, wrapped in the foil, for at least an hour. Slice it thin, across the grain, and serve with mustard. Or, make my favorite sandwich of all time, a corned beef Reuben on pumpernickel bread.

This is one of those things I wish I hadn’t known existed. Pastrami, when made with a pork shoulder, is one of the best things I’ve ever eaten.

Place the salt, brown sugar, pickling spice, Prague powder, garlic, and tap water in a large, nonreactive pot. Bring to a boil and stir until the salt and sugar are dissolved. Remove from heat, add the ice water, and cool to room temperature.

Trim the pork, removing sinew and excess fat. Place it in a large lidded container and add the brine. Store in the refrigerator for 5 days, shaking the container once a day to keep it well mixed.

To make the rub, place the peppercorns and coriander seeds in a skillet and toast over medium heat until fragrant, about 3 minutes, shaking the pan periodically. Put the mix in a bowl and let cool, then coarsely grind up with a mortar and pestle.

Remove the pork from the brine and rinse thoroughly under cold water, then dry it off with paper towels. Sprinkle with the rub until thoroughly coated.

Set up your smoker following the manufacturer’s instructions and preheat to around 225 degrees. Add the wood (I prefer cherry or apple). Place the pork fat-side up in the smoker. Smoke until the meat reaches an internal temperature of 160 degrees in the thickest part, about 4 to 5 hours. Remove to a cutting board and let cool to room temperature, then refrigerate for a few hours.

Slice across the grain as thinly as possible. Eat the first few slices with your hands like a caveman, then make the best pastrami sandwich you will ever lay eyes upon.