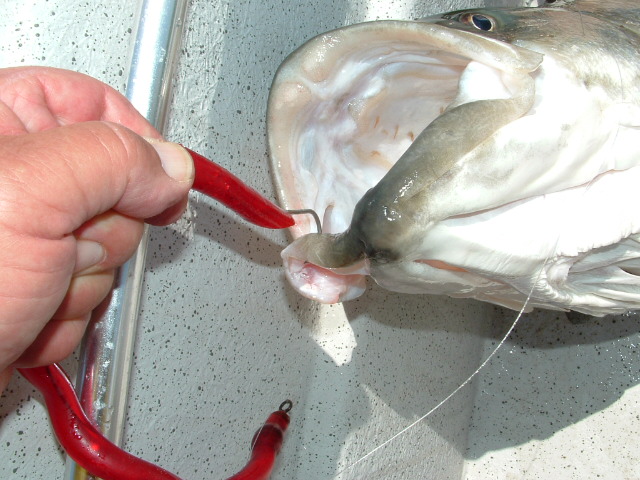 Green water broke over the foredeck, washed into the canted, tight vee of the high mahogany Cutty shield on the sea-kindly bass boat, then poured off either side, back to where it came from. Conditions were sloppy or, as my mate Andy would say, hairy along the edge of the rip line with the wind whipping up against the tide. The wave broke under our midsection, shoving us down the cresting surge as I racked the tiller to port to dig the keel into the backside and complete my pass along the steep drop-off. I wove in and out between the turbulence, dragging the baited tube and worm rig behind us until I read the peak of the second hump on the recorder and jogged to port, causing the weighted tubes to plunge toward the bottom of the slope.

“Got one,” came a call from the stern, where my deckmate was braced against the aft corner of the starboard gunwale, rod bent, and the fifth color of lead line slipping smoothly off the Penn Senator I’d preset with a fairly stiff drag. The heavy fish turned its broad body sideways in the strong current and dug for the bottom. Andy sensed the fish moving sideways across our stern toward his rod in the opposite rod holder, so I grabbed it and begin cranking for all I was worth to avoid a tangle.

We always hold our own rods while trolling to detect bait-stealing bites from scup or cunners (or hook-fouling pieces of weed), but on that pass, I had to secure the banging companionway door and handed my rod to Andy.

About the time I recovered half the line back onto the spool, another bass slammed into my speeding tube and worm rig, and headed right across the stern. I ducked under Andy as he bolted to the opposite side of the stern with all his lead line out and well into the mono backing. Both fish were strong and reluctant to give up their claims to the rugged habitat. It became a dance where we switched places several times as I fought my way back to the controls to prevent the boat from turning broadside to the seas.

Andy’s fish came alongside first but was out of reach of the six-foot gaff I had onboard, so I jogged ahead and slowly made a circle to bring us closer to the thrashing linesider.

“The hook!” was all he shouted as we both noticed the fish attached to the thin membrane torn loose from the inside of its jaw. I made a lunge, striking my ribs against the washboard, and caught it on the forward edge of her erect dorsal. Andy took the gaff and wrestled the heavy fish aboard while I went back aft to lift the other bent rod from the holder. Keeping my eye on our position to keep the bow into the seas, I finally got the fish close enough for Andy to gaff her inside her gaping maw. With two hefty, identical stripers slapping the wet deck, I worked our way out of the rip to calmer water, where we broke out the Thermos and a box of soggy cookies.

We made four more passes over that same structure without a single hit. The battle those two stripers fought must have signaled to any others nearby that the hump was no longer a secure place to forage. While heading for another location, my mate changed out the hook on his tube and brought the bent 7/0 one to me. It had begun to open up to an arc that would have allowed the fish to escape if it had not come to the boat sooner Looking to the northwest, we noticed darkening skies and thunderheads on the horizon and decided to call it a day. After taking our catch to market, we discussed hooks over coffee, stacks of pancakes, and crisp bacon at a local diner owned by a fisherman and his wife. On occasion, he bartered a fluke, a few sea bass, or a few big scup for breakfast served long after their noontime closure for those meals. In the years preceding that day, I had been experimenting with tubes, weights, sizes, and colors, but it was the hooks that were challenging. The standard hooks available at the time were more than adequate for the average striper when using tackle to match them. In my case, that began with a rugged and dependable (but heavy) Penn Senator 4/0 reel filled with 50-pound-test backing and five colors of 36-pound-test lead line. Each of my rods were custom built to have a softer tip and more backbone from the middle down to the reel seat.

With that outfit and similar tackle, stripers from schoolies to spirited fish in the low 30-pound class were handled without difficulties, but when I hooked the heavyweights in and along boulder fields, the hooks became a problem. With medium drag pressure, the fish had their heads and occasionally scrubbed me off. With the heavy drag pressure required to keep them out of the briars, some hooks began to take a slight bend. It was a very frustrating time until we realized we were using tackle that was not designed or intended to put the brakes to trophy-class stripers.

My longtime partner, Russ, once switched over to stainless hooks, which worked for a while, so he gave me a dozen to test. I caught quite a few stripers on them the first trip out, but rather than take a slight bend under severe stress, those hooks tended to open up and a few even broke. Russ, a tin knocker by trade, examined them and declared their heat treatment had caused a bad batch. We decided that a little discoloration and eventually rust, depending on the life of the tube, was worth the difference.

In the nearly 50-plus seasons, I have been experimenting and tinkering with my tube and worm, the adjustments I made have guided me to a finished product that I am very satisfied with. I began using the best J-hooks I could purchase and switched brands and types in my search for the best hooks to stand up to the awesome strength of outsized linesiders.

One of the most significant improvements along the way was my discovery of Tru-Turn hooks. About a dozen years ago, I was asked to join the pro staff of the TTI Blakemore company, a fishing tackle distributor in Alabama. While much of their extensive line are freshwater-based lures, they are the distributor of the Tru-Turn brand. One glance at those angled hooks with their ideal gap, super-sharp spear points, and Permasteel finish caused me to order a box of them. Their angled shafts turn toward pressure and hook fish solidly. (Just step on a rake and you will see what I mean.) They hooked stripers and blues from schoolies to bass of 54 pounds right in the jaw 99.9% of the time with no injuries or deaths from deeper penetration.

Over the many years of penning these articles, I have avoided using this column to editorialize. These pages have always been a comfortable place where I’ve shared my experiences and tactics with friends. Over a lifetime of active participation in fisheries management, I have listened to and witnessed some very damaging policy suggestions and decisions regarding our finite marine resources. Serving on the Marine Fisheries Commission, I was one of only two recreational members of that nine-member board, and we were usually outmanned and outgunned. Yet through honest (sometimes heated) debate, discussion, negotiations, and the power of the pen, we were able to make some progress toward the protection of our limited resources. At this stage and state of our diminishing marine resources, we need to work toward recovery without enacting unproven, radical measures.

In almost 50 years of using J-style hooks on my tubes, I have been hooking bass in no place other than the jaw and inner corners of the mouth. I can recall very few stripers that took the hook inside its maw, where it stuck in the roof of its mouth. Those fish were brought alongside the boat, the hook disengaged, and the fish swam away freely without difficulty or bleeding.

Circle hooks were designed to be fished unattended, primarily on long lines. I have tested and used circle hooks since their introduction and, if fished correctly, they do what they were intended to do, which is find purchase in the corner of the jaw rather than catching on the stomach lining or the gill rakers. I am not disputing the effectiveness of circle hooks, which are a worthwhile conservation tool when used properly, but I believe that mandating their use on tubes is a completely illogical recommendation.

“The Board accepted the Maine/Massachusetts proposal to study the tube rig fishery and approved a delayed implementation of the circle hook requirement for tube rig gear coastwide through 2022.”

This article was published in the February 2021 issue, prior to the ASMFC tube and worm exemption.