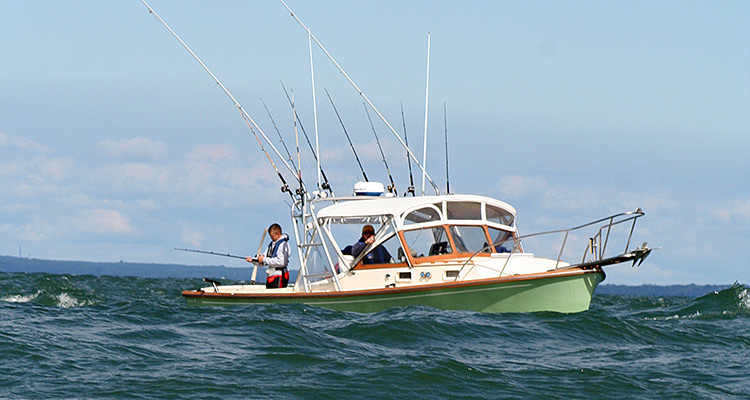 Bunker spoons and diving plugs catch cow stripers in the ocean while most anglers are still fishing the bays.

Off the beaches of New Jersey, the 2011 striped bass season was without equal in recent times. Large 30- to 40-pound class bass started showing up in April and continued their assault on arriving schools of bunker as the season matured into May. June was just as good, if not better for those big girls, many of which stuck around until July before continuing their sojourn north to New England. But let me back up and start over, and get into how the last few early trophy striper seasons started out “under the radar” while most fishing boats were still snuggling under their winter storage covers.

On a fine April afternoon few years ago, I was doing very well catching scrappy 8- to 15-pound-class stripers in the back bay on light tackle. After finishing up for the day a quick voicemail check included one from the “Bunker Spoon Man” himself, Tony Maja. Tony seemed excited as he informed me of large bass being taken on spoons just a few miles to our north. Big bass, here now? Before the vast bunker schools have arrived? How could this be with ocean temperatures still so cold? I assumed he must have stumbled upon a few early arriving random bass or possibly hit a few Hudson River residents that had slid south. But wherever they’d come from, there were some larger fish around right now. This was very good news.

The next day, my clients agreed to spend their day mixing things up between fishing the back bay and trolling along the beaches. We excitedly started off Island Beach State Park, but all hands remained a bit skeptical because of the chilly 46-degree water my temperature gauge was reading. Once both large silver spoons were deployed, it was time to see for myself what – if anything – was going on. During the first hour, absolutely nothing happened. I remembered Tony’s news and after a few color, size and depth changes, the starboard rod suddenly slammed down. The Penn Senator’s drag screamed out line under the weight and strain of what could only be a sizable striped bass. Just as I was pulling back on the throttles to allow the first angler to engage the leviathan, the port rod slammed down in the same violent manner with the drag singing the same song. Now both anglers were attempting to land what could only be two big stripers.

My clients played the age-old tug of war well and continued to put the wire line back onto the spool, but as the portside angler’s striper surfaced near the stern, it was shadowed by five or six other big bass. Were they competing for the shiny “meal” she had visibly hanging from her mouth? This turned out to be a good possibility since back at the fillet table, the bass’ stomach contents consisted of only a few small bottom fish. To everyone’s delight we landed a few more large stripers before ending the day with smiles on the faces of the two arm-weary anglers.

Could it be that there are large bass arriving on the ocean side much earlier than expected on a yearly basis? Could it also be that these early-arriving fish have no consistent supply of forage? If this is the case, trolling bunker spoons and deep-diving plugs is the answer. Without the luxury of large, easily located schools of bunker in the area, covering plenty of water is one of the best ways to find and do battle with April’s plus-size stripers.

Truly successful trolling is a bit more sophisticated than simply pulling these license-plate-sized spoons and 2×4-sized plugs around aimlessly until you connect. Working the shallower depths along the beaches early in the morning and retreating to deeper water as the sun continues to rise will help keep you in the target zone. Work eastward in a zig-zag pattern until you locate the depth where the fish are holding. Zig-zagging allows a bit more presentation time over a given depth than simply trolling in a straight line. Be sure to note and mark areas where strikes are encountered to add to your success. Also, be sure to approach the fish-holding areas from different directions as the bass can and do show favor to a quartering tide presentation.

Bunker-spoon trolling rods are usually slow-action, 9-foot rods that bend from the tip all the way down through to the butt. The slow action of the rod maximizes the spoon’s swimming characteristics to engage these big stripers. The rods “rhythmic pump” will reveal whether or not the spoon is swimming properly. Ultimately, the response from the bass will dictate the exact speed, so keep adjusting incrementally until you get properly dialed in.

If you mark fish holding deep, try pulling the boat out of gear and letting the spoons flutter to the bottom before goosing the throttle forward, causing the spoons to dart upward. This makes the lures appear as if they are escaping baitfish, and this tactic has proven very effective on many occasions.

While spoons give the rod a characteristic slow throbbing motion, deep-diving plugs will make the rod tip bounce more rapidly as the lure vibrates. In a similar albeit reverse tactic, when dragging deep divers, pulling back on the throttles will cause the plugs to pause and rise toward the surface, which often triggers the strikes from following bass.

The choice of spooling with wire or braided line will come down to your personal preference and experience. While both lines are capable of penetrating the depths, it may come down to dollars and cents. Tony Maja’s Metered Braid has joined his trolling tackle product line. This braid eliminates the “how much line to let out to get what depth?” guesswork. A 15-foot shot of 60-pound-test monofilament or fluorocarbon leader connected to the mainline by a ball bearing swivel will keep the twist of the mainline to a minimum. Spoons can be attached via a ball bearing swivel or beaded swivel chain running directly to the lure. Diving plugs need little in the way of line twist management other than a swivel.

I don’t like using drails to get the lure down. Personally I have found them to only add weight and expense to the mainline, while limiting the seductive swimming action of the spoon or plug. I prefer to allow my plugs and spoons to swim in the most uninhibited way to maximize the action of the lure.

Bunker spoons and deep-diving plugs with similar “rhythm” can be effectively trolled together. Remember, too slow a speed will have the spoons “clamming” and too fast of a speed may have the plugs performing spastic aerial displays. But sometimes, sticking with one type of lure is the better bet. My favorite colors for spring trolling include white, chartreuse, chrome, green, yellow and white/red to name a few. What worked yesterday doesn’t mean a thing, so keep changing colors, sizes, and lure combinations until the stripers tell you what they want that day.

If you are employing two trolling rods, it is highly recommended to keep these wide-swinging spoons well apart by use of a siderigger that can be placed into your boat’s rod holders. Such gear will not only enable you to keep your lines from crossing each other, but will also keep them lower to the water and out of the ill effects of wind.

Reels need large line capacity and frame strength. Penn Senators sized 3/0 and 4/0 have served me well over the years. Remember that reels must resist distortion under the strain of larger fish to ensure not only a successful end game, but a more pleasurable experience for the angler.

Think it’s too early to start trolling for trophies out front? Think again. Don’t wait for the fishing reports to dictate when the big girls are in town – be the fishing report. Blaze your own trail to the ocean waters this season and connect with trophy size bass while everyone else is still catching schoolies!