It seems to happen to me at least once a year. I go out on a fishing trip, ripe with enthusiasm, but things get off to a slow start. The cooler is empty and then someone catches something weird. Not wanting to go home empty-handed, I decide to keep it.

Such was the case a few weeks ago. I had joined Captain Jason Colby and a few others on a trip out of Westport, MA. Our target species were black sea bass and tautog, but things got off to a slow start.

The first two reefs we checked were seemingly lifeless. The captain assured us that they had both been loaded with fish just two days before. We made several drifts over them and I caught one 6-inch black sea bass. And then it happened. The captain pulled up a 2-foot-long conger eel. One of the other guys on the boat yelled out “Those things taste good when they’re smoked!” 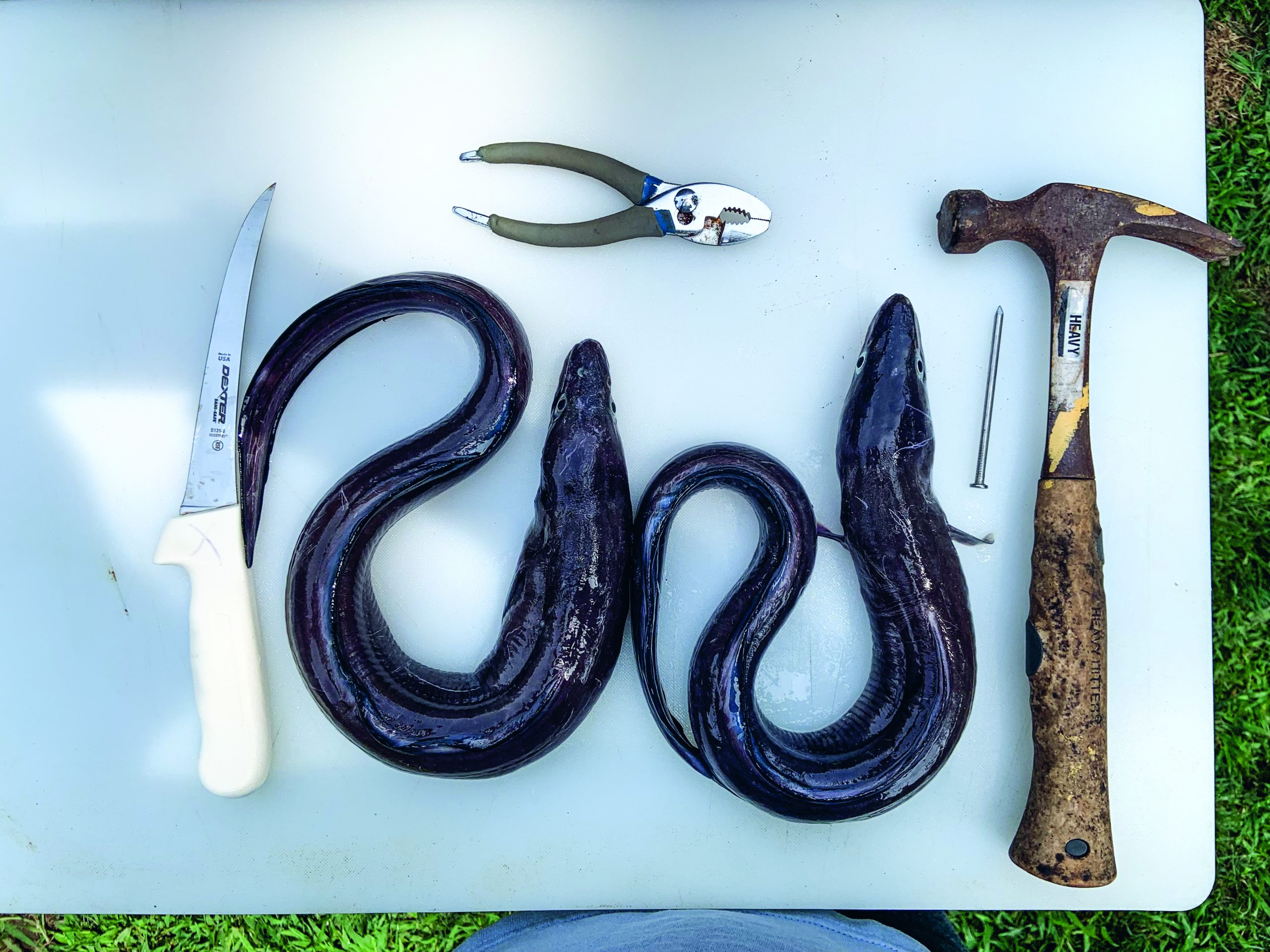 I had never eaten a conger eel, so I was intrigued. I am always excited to try eating a critter I’ve never dined on before, so into the cooler it went.

That fishing trip improved drastically when we tried a third spot. We bailed some very nice sea bass and tautog, and the captain even managed to haul in a second conger eel. It was a heck of a trip that left me with a new predicament – now I had to deal with two eels.

That night, for the first time in my life, I skinned an eel. I drove a large nail through its head into the side of my shed. I cut a circle around the eel’s neck, being careful to barely slice through the skin. I then cut a small pocket under the skin at the eel’s head and clamped down on the skin with a pair of old pliers. Getting started was a bit of a challenge; I needed to scrape away the meat that was sticking to the skin. However, once I got the first inch or two peeled back, the remaining skin slid right off like a knee-high tube sock.

I was about to skin the second eel when it dawned on me. My friend Larry Backman has been using eels for bait when deep-dropping for swordfish so wouldn’t a two-foot conger eel make a heck of a deep-drop bait? I decided to freeze the second one, and later gave it to Larry, who seemed thankful.

I was now left with one whole, skinned eel to play with and I felt smoking some of it was mandatory. I also wanted to try eating it in a simple manner, where I could experience the true taste of conger eel. I also had a big bag of tautog fillets, so that night I decided to fire up a Portuguese Braised Fish Stew.

I’m not going to lie to you. This is a great recipe, with one exception. At first, I tried a bite of the tautog and it was spot on. Tog has a nice, firm texture that is well suited for braising. Next, I took a bite of the conger eel. I chewed it three times, and then spit it out. Bones! The eel was riddled with pin bones, which are my Achilles heel of fish eating. It grosses me out to bite into a piece of fish and get a mouthful of bones.

Overall, the flavor of the eel wasn’t bad at all. The texture was surprisingly firm, even more so than the tautog.

I took a big swill of beer, built up some courage, and went back in for round two, this time being careful to work around the bones. The bone structure of an eel was new to me, so I studied it for a bit in an attempt to get a grasp on its anatomy. I picked out a big piece with my fork, carefully inspected it for bones, and chomped down on it. MORE BONES!!!

This was going to be the first, and last, time I ate a conger eel. I had spent 3 hours earlier smoking the other half of that eel. It came out looking like a deep-fried hot dog. After my initial experience eating it, I couldn’t muster the courage to try the smoked version. I fed it to my dog, who loved it.

Over the years, I have experimented with eating a number of “trash fish.” Some were good, some weren’t bad, and some were outright terrible.

I caught my first false albacore in the fall of 1997 when I was fishing on a jetty for stripers. I immediately bled it, packed it into a 5-gallon bucket, and raced as fast as I could to buy three bags of ice.

After icing it for several hours, I cut it up real nice and let the loins soak in a teriyaki marinade for an hour. I grilled it, took one bite, and spit it out. It was the “fishiest” piece of fish I have ever tasted.

Since then, on several occasions, I’ve had people tell me they eat albies, and if properly prepared, they can be downright delicious. The key, I’ve been told, is that they must be bled and iced immediately, and that when they are filleted, all of the dark red meat must be removed.

It would be another 20 years before I could build up the courage to try eating one again. Back in 2018, Kevin Blinkoff, executive editor for On The Water, came walking into the office with a dead false albacore. He tried to release it, but as albies often do, the fish bled out and went belly up.

Kevin plopped the fish down on his desk and proceeded to fillet it, being careful to remove all the dark red meat (which makes up most of the fish). What remained looked similar to raw tuna.

He then prepared it, raw, with a side of soy sauce and wasabi. We all gathered around, waiting for someone else to go first. I told Kevin he had killed it, so he should break the ice. He agreed.

So, I tried it. Much to my surprise, false albacore sashimi does fall into the “not bad” category. It wasn’t that far off from, let’s say, yellowfin tuna. It didn’t have a “fishy” taste, although it did have a slightly metallic aftertaste, which was easy to cover up with a copious amount of wasabi. If you fed it to a drunk person, you could probably convince them it was Grade-A sushi.

I must admit that I haven’t eaten one since, but if I ever get in a rut and can’t catch anything better, I might be willing to give it a try again.

“In England, they use dogfish in their fish and chips.”

I’ve heard this claim hundreds of times, although I don’t know if it’s actually true. In the video below, the OTW crew filmed a TV episode a few years ago where they went out looking for doormat fluke, and as often happens, the trip got off to a slow start. The rigs were getting covered up by spiny dogfish, which the captain claimed were one of his favorite fish to eat. So, into the box one went.

The following day, someone came up with the bright idea of doing a taste test: fried fluke vs. dogfish. I made a big batch of my favorite beer batter, fired up the deep fryer, and got to work. I trimmed up the dogfish as best I could to remove any red meat, battered it up and fried it, along with some fluke, to perfection.

As it turns out, dogfish also falls into the “not bad” category. Some of the taste-testers could not tell a difference and the flavor of both fish was pretty mild. I could detect a slight difference in texture, however. The dogfish, as is common with many types of sharks, had a slightly spongy texture but, overall, I was surprised. Will I eat it again? I hope I never need to stoop that low, but if history repeats itself, I’ll eventually toss one into a cooler.

My one and only time trying to prepare skate was also due to a fishing trip that started off slow. At first, we tried for stripers. There were thousands of them around the week before, but we couldn’t even find a bluefish. We then decided to try for fluke, but it was in an area none of us had ever bottom fished before so we struggled. Just then, I caught a big, fat skate. It was an impressive specimen, one of the largest I’ve ever laid eyes upon, so into the box it went. We eventually found a big pile of nice fluke and almost reached our limit, but there I was with a big, dead, ugly skate at the bottom of the cooler.

My momma always said, “You kill it, you eat it,” so I try my best to live by that mantra, but sometimes it’s a challenge.

That night, I watched detailed YouTube videos on how to fillet a skate. I gathered up the necessary materials and got to work.

Unfortunately, I must have fast-forwarded through an important step in the video. I failed to remove the row of cartilaginous “bones” that separate the bottom fillet from the top fillet in a skate wing.

I beautifully seasoned up one of the wings and dusted it in flour. I got a cast-iron skillet nice and hot, added some butter, and began searing it.

It was as if the skate wing came back to life. It began curling up in the pan, the same way a skate puckers up when you pull it out of the water. I grabbed a spatula and tried mashing it down but was met with great resistance. I had to press it down the entire time it cooked, and when I plated it, it curled right back up again. Oh well, I thought, perhaps that’s normal?

As soon as I took the first bite, I realized where I had gone wrong. I got a mouthful of cartilage, which might even be more disgusting than getting a mouthful of pin bones. I had completely botched the filleting process, but that wasn’t the only problem. The taste of the skate was simply not good – mushy and it had a “musty” aftertaste. I don’t know if I had kept the wrong species of skate, gut I will never tackle a skate wing again.

And then there was the time I tried eating an oyster toadfish. It survived 8 hours packed on ice in the cooler, and I had to kill it with a pellet gun … but that is a story for another day.