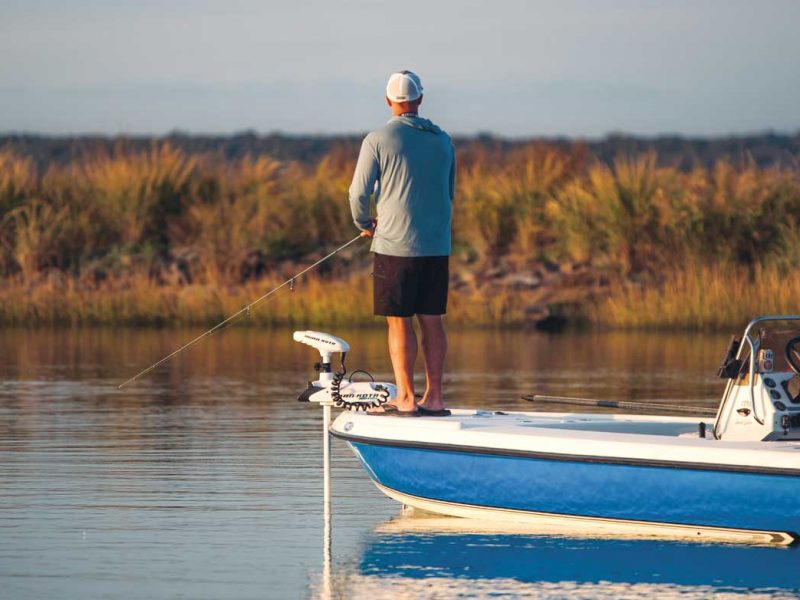 “I bet they’d hit a topwater.”

How many anglers have uttered these words when the fish throw caution to the wind and are biting everything in sight? This implies that topwater is a presentation that you “can get away with” when you’re already catching fish using other tactics.

Most anglers encounter topwater stripers one of three ways: casting at breaking fish, catching a couple of fish at dawn or dusk, or covering water and crossing your fingers while fishing the surf. The typical weapons of choice for these situations are poppers like the Super Strike Little Neck Popper and Stillwater Smack-It. 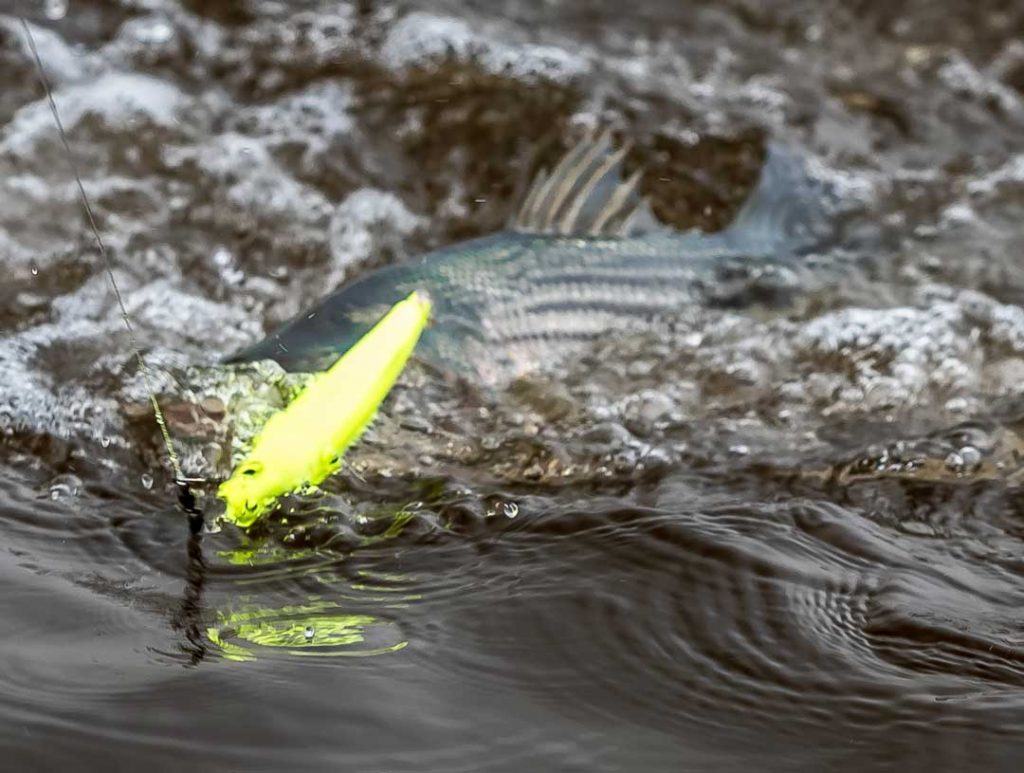 It’s a shame that topwater is thought of as a niche presentation because if you ask people about their favorite way to catch striped bass, most will say on topwater plugs. In the Northeast, the shallow waters of back bays offer topwater bites for roughly 6 months.

There are more than a couple of choices for topwater plugs on the market, but not all are created equal. Depending on the conditions, the fish may prefer one plug over others. Picking the right one and tweaking the rest of your gear can mean the difference between seeing a couple of half-hearted swipes and catching a dozen or more fish.

I think many anglers simplify inshore tackle more than they should. Anglers tend to get one light outfit and use it for back-bay fluke, all their schoolie fishing, albies, etc. On the other hand, the typical largemouth bass fisherman has a different rod for spinnerbaits, crankbaits, topwaters, frogs, and soft plastics. While bass guys might get a little carried away, different rod actions do offer certain advantages for certain techniques. Topwaters are no exception.

Rods intended to throw plugs should be different from rods used primarily for single-hook jigs. The mushy tip and midsection of a moderate-action rod help keep a plug’s treble hooks pinned better, gives the plug a better walking action across the surface, and the cushion allows fish to engulf the bait more fully on the strike. However, the inshore fishing industry has fallen in love with the extra-fast action typically associated with super-light, high-modulus carbon rods. These are very light and sensitive, but more moderate action rods are significantly more forgiving.

Rods rated for roughly ¼ to 1 ounce will cover most backwater topwater fishing. Some good options are available at every price point, including the 7-foot, 6-inch Tsunami Carbon Shield, the 7-foot, 6-inch Shimano GLF, and the Shimano Teramar XX.

For the reel, look for a 3000 or 4000 size that balances with the rod and lays the line well. For line, 10-pound braid is the way to go unless fishing especially close to structure, in which case 15- or 20-pound test should provide added abrasion resistance. (I like PowerPro Super 8 Slick V2.) I use a 30-pound-test leader and a 50-pound Tactical Angler Power Clip, which allow for easy lure changes. When choosing a leader for topwater, there is no advantage to using fluorocarbon. Since fluorocarbon sinks, traditional monofilament is a better option.

I’ve never seen bass show as much preference for certain plugs as they do with topwater spooks. I’ve fished through a pocket with one bait and seen nothing, switched plugs, then had half a dozen fish climbing on top of one another to get the plug.

For inshore topwater fishing, there are walk-the-dog-style baits, and there’s everything else. I know many anglers love poppers and metal lips, but the side-to-side wag of a spook-style bait seems to bring more stripers to the surface than any other.

My favorite topwater is the Tactical Anglers Crossover Stalker, though it doesn’t cast as well as other plugs and it struggles to walk in severe chop. At such times, it can pay to keep a small Super Strike Little Neck Popper in your bag. In rough conditions, I also like the Yo-Zuri Top-Knock, 4-inch Tsunami Talking Popper, and the Bomber Badonk-A-Donk. The full-sized Heddon Super Spook, One-Knocker Spook, and Rapala Skitterwalk are also great.

The sound of a plug is an overlooked aspect of topwater fishing. In stormy or dirty conditions or over deeper water, a loud, low-frequency knock is exactly right. However, in shallow water, a higher-pitched, tinnier sound can work better and be a bit less overpowering. This reason for this is because low-frequency sounds travel farther than high frequency sounds underwater (the same is true in air, but the fish don’t know that). In slick calm conditions, or with pressured fish, silent baits can be the way to getting a few more bites.

Another overlooked aspect of topwater fishing is hook selection. You can use most reputable plugs straight out of the box, but you’ll hook and land more fish if you upgrade the hooks. The first upgrade I suggest is to take the tail hook off and put on an inline single hook with the hook point down. This reduces harm to the fish and tends to hook it at the back of the bait, leaving you with the security of a nice big single hook in the fish instead of a smaller treble. The second upgrade is to replace the front hook with a red treble. This is an old largemouth trick and gives the striper something to aim for when it hits a bait. It’s like Mel Gibson told his sons in The Patriot: “Aim small, miss small.” It honestly shouldn’t work since striped bass have significantly more rods (which are not sensitive to red light) than cones in their eyes. This should mean that striped bass can’t see red that well (since they see red things as black—not as invisible), but they do seem to target the red front hook.

Also keep at least one non-topwater handy, like a twitch bait or redfin, in case the fish are there but unwilling to break the surface. This may happen for several reasons—maybe post-front conditions, boat traffic, or simply that the fish fed heavily the night before. A subsurface bait is also good to have in case the bite lasts through last light and the bass are having trouble keying in on a topwater

In backwaters, the areas you fish will be somewhere between large, primarily structureless flats and distinct hard structures like creek mouths, sodbanks, or docks.

On flats, the benefit is that any fish you encounter are probably there to eat. The simplest approach, covering water hoping to encounter a cruising fish, might be the answer. This means making long casts while drifting, wading, or walking the bank. Remember to feather the spool and start retrieving as the plug hits the water in case it lands close to a fish that may have looked at it when it heard the splash. Any minute piece of structure, whether a wind or current seam, a hole in a mussel bed, or a patch of sand surrounded by mud, could be an oasis in the desert to a striper.

Structure fishing is far more technical because you’re typically dealing with stationary fish, and a bad presentation either won’t be seen or could spook the fish out of the entire spot. The key in these situations is not to let the fish see or hear the bait land, and instead, let it swing by. The specifics may vary significantly, but the need for accurate casts will make all the difference.

When retrieving the plug, keep in mind that the only thing swimming with a regular rhythm is a person, which is why mixing up the cadence during a retrieve is so important. Being able to do this is one of the biggest advantages that spooks have over traditional pencil poppers.

My favorite trick is to add a very brief (less than half a second) pause every ten or so twitches. This doesn’t seem like much, but the break in the cadence may trigger a bite from an uncertain follower.

When your bait gets swirled on or the fish misses, don’t slow down your retrieve. Speed up, stay the same, or incorporate a brief pause. I’ve even gotten a bite just by reeling the plug in, so anything but slowing down or stopping might work on a given day. When you see a fish blow up on your plug, don’t set the hook; instead, wait until you feel the weight of the fish and pull back a bit. The hooks are relatively light so you don’t have to smash a hookset.