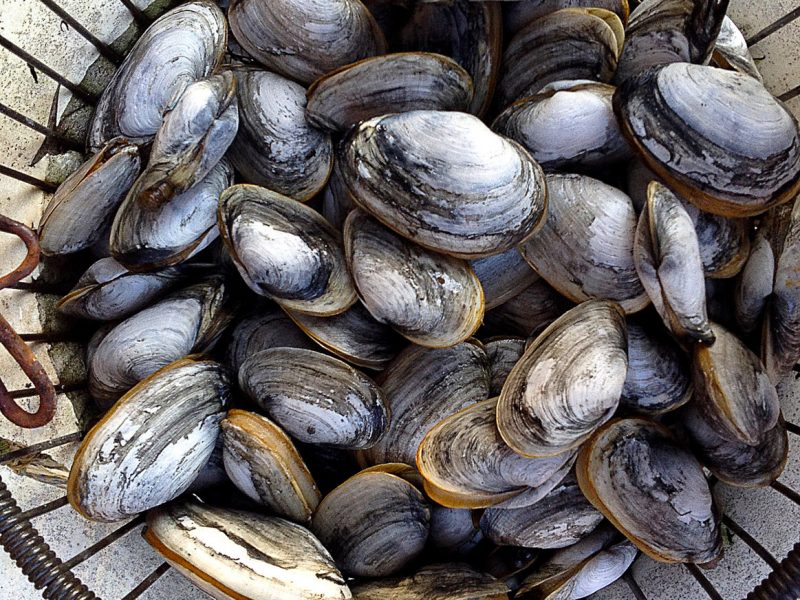 “Hey, mister… whatcha’ doing with that big toilet plunger?”
“I’m going to get some piss clams for my dinner.” I replied.

The question was asked by a young British tourist who had intercepted me on the way to one of my summertime clamming spots. Many people are completely unaware that a toilet plunger, when properly employed, can be a weapon of mass destruction for gathering soft-shelled clams.
Mya arenaria, popularly called “steamers,” “softshells,” “longnecks,” “piss clams,” or “Ipswich clams,” are fairly common along the Northeast coast. They live buried in the mud or sand on tidal flats, deeper in the sea floor than quahogs, and are generally found around 6 to 12 inches down. They are most common between the mid-tide line to just below the low-tide line, and can be gathered throughout the year, but I believe they are tastiest during the cold winter months.

Since steamers live deep in the muck and have thin, fragile shells, they are nearly impossible to gather with a traditional clam rake. If you want to round up your own supply, you will need to procure some specialized gear.

Clam Plunger: An effective tool for gathering steamers. Make your own, or buy one online at www.shelfishing.com

I have no idea who invented this technique, but whoever it was, they were brilliant. Basically, you use a toilet plunger attached to a 6-foot pole–with a basket on the opposite end–to “plunge” a hole in the bottom and then sift through the debris.

When plunging for steamers, it is often best to head out in the middle of the tide. This allows you to work in the proper zone, and the moving current will help flush out the holes you make.

Look for small holes, about the diameter of a pencil, along the bottom. These are telltale signs that steamers are lurking below. Start out in a spot that has a concentration of these holes and begin by using the plunger end of the pole. In short bursts, thrust the plunger up and down, and try not to make direct contact with the bottom. (Even though the plunger is made of rubber, it can still crush the shell of a delicate steamer.) The plunger will begin forming a depression in the bottom. Go fast and furious on the first try, since the steamers are going to be at least 6 inches down. Once you get a decent hole started, flip the rake around and use the basket end to sift through the debris in the bottom of the hole.

You’ll be amazed with the stuff you uncover—old shells, crabs, crazy-looking worms plus other artifacts and oddities—and don’t be surprised if you get a few quahogs in the top layer. Keep repeating the process of plunging and sifting, as it usually takes a few minutes to get down into the zone. After a while, you will develop a feel for it, and when you dislodge a steamer you will be able to feel it. However, beware of plunging and sifting too vigorously. Steamers are fragile, so you don’t want to grind them up in the hole. Once you get down deep enough and start coming up with steamers, start working the edges of the hole. Going down deeper isn’t going to get you more clams, since they all live at approximately the same depth. Often, when I find a good spot, I plunge a trough along the bottom, always moving onward as I plunge.

Another more common technique for gathering steamers is dry digging. A short-handled rake (or a potato rake) is a good way to start out, but if you don’t have one you can simply use your hands. I like to wear a pair of gloves when I’m dry digging because you never know what you’re going to uncover—things buried in the sand such as broken shells, sharp rocks and pieces of glass.

Head out at dead-low tide and look for sandy areas. Walk along the water’s edge, looking for tiny holes in the sand. If mini-geysers shoot up as you walk along, you can be sure you’re in the right area (thus the nickname “piss clam”). Insert a short-handled rake into the sand several inches past a hole, then pull up a big clump and sift through it…there might be a clam in there. Once you have a hole started, use your hands to start excavating. The hole will start to fill with water, which is fine because it makes digging easier. As you start to develop a nice hole, the sides will begin to cave in. Keep a sharp lookout, though, as you will usually see the long necks of the steamers extending up through the sand. When you spot the neck, start digging, trying to get underneath it. Grab it gently, and slowly pluck it out.

Get the Sand Out

Some people complain that they don’t like eating steamers because they’re too “sandy.” Nine out of ten times, a sandy clam is the result of improper preparation. Steamers live in sand, so if you want a nice meal you must get the sand out of them. It’s essential to “flush” steamers before you eat them. I bring a 20-gallon cooler along and when I’ve gotten my share of clams, I’ll fill the cooler half-full with sea water and put all of the steamers in it. When I get home, I stir a cup of cornmeal into the seawater, as legend has it that the cornmeal makes the steamers spit out any sand. Some old-timers tell me that the cornmeal makes no difference, and simply soaking the steamers in seawater is sufficient. I’m as stubborn as any old-timer, so I always add the cornmeal; it’s cheap, and my clams are rarely sandy. 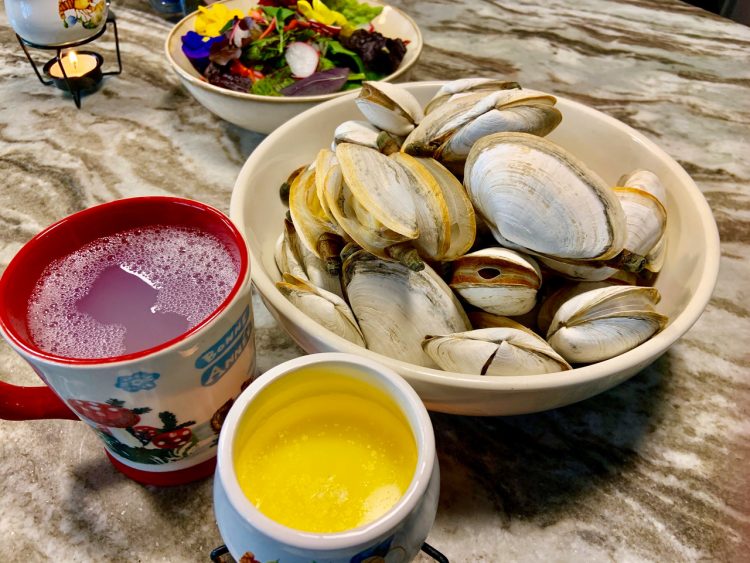 Steamers are loaded with their own sweet and salty flavor, and perhaps my favorite way to prepare them is to keep it simple. Steamed and eaten with some melted butter, they are a true treat and are a perennial favorite at clambakes throughout the region.

Place a steamer basket in a large pot and add the salt, by leaves and water. (The beer doesn’t add much flavor, so cheap bear will work just fine–it makes the liquid foam up quicker, which decreases the cooking time.) Turn the heat on high, and as soon as it reaches a rolling boil, add the clams and cover with the lid. Steam for 8 to 10 minutes (longer if it’s a big batch), until all the clams are open. Keep a close eye on them while they are cooking, as you will need to reduce the heat at some point to keep the pot from boiling over.

To serve, strain the broth into individual serving bowls (I like to use coffee cups), give everyone some melted butter, and dig in! This can be a messy endeavor, so it’s smart to cover the table with old newspapers before commencing the feast.

It’s also important to remove the sheath that covers the clam’s siphon and to separate the belly from the siphon before dunking it into the broth. If there is any sand still inside the clam, it will most likely be found at the base of the siphon. Dunk the clam into the broth first to clean and warm it, and then douse it in the melted butter before eating. Simple, manly, and delicious! Pairs best with good beer.