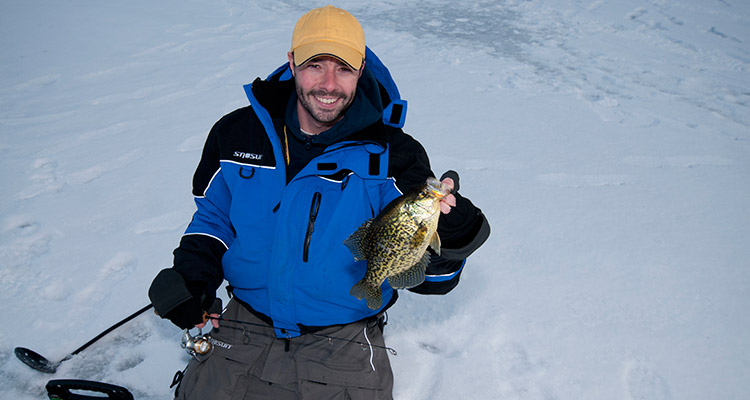 The signals on my flasher are barely moving in the water column. It’s a telltale sign of inactive, fussy crappies. I’m used to it, as this finicky behavior is a common daytime scenario in the bay I’m fishing.

The crappie are suspended a few feet off bottom on the 10-foot flat. I know that with a finesse approach, and a little patience, the fish can be coaxed into biting. It’s time to tweak tactics.

I reel up the small jigging spoon and grab another rod, outfitted with a tiny teardrop ice jig. I grab two wiggling maggots from my bait puck and lightly hook them on the jig.

I lower the pint-sized jig. “No sudden movements,” I say to myself. Just a lazy, pulsating drop, copying the micro-moves of an invertebrate—the wintertime food of slabs.

Spying the sinking jig on the sonar, I stop it two feet above the fish signals. Then, I deadstick the jig for 30 seconds, give it a light quiver, and lower it 6 inches closer to the crappie.

The fish signal flickers, and then slowly rises. I keep the jig still. The fish stalls. I try a faint shake. The crappie inches closer. I watch the spring bobber. Nothing. I give the rod blank a light tap with my index finger. The strike indicator rises. 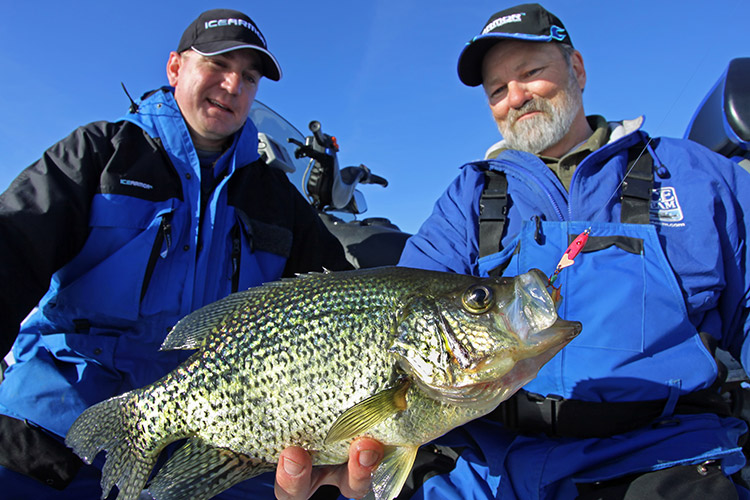 Crappie can be some of the fussiest fish we pursue on ice. The action is fast and furious when they’re biting, but when papermouths get persnickety, you need to adjust or you’ll go home empty handed.

Without a sensitive, jigging rod outfitted with a strike indicator it can be very difficult to know when a crappie bites. Here’s why.Fussy crappie are typically light biters. Plus, crappie are up-feeders—when one sucks in a snack, it’s often swimming upward. The result is referred to as a “lift bite,” which is difficult to detect without a specialty rod with a strike indicator.

One option is a rod outfitted with a spring bobber at its tip. Spring bobbers come factory installed or can be purchased as an add-on. The other option is a rod with a very sensitive tip, such as a noodle rod or quick-tip rod. The fiberglass or blended blanks of these rods feature a powerful bottom half, but they are very limber towards the tip. Here, the entire upper blank serves as the strike indicator.

Both a spring bobber and noodle-rod tip operate under the same principle: they bend slightly under the weight of a jig, but when a crappie bites and swims upward, the indicator unloads and straightens. Of course, when a fish hits and continues to swim sideways or moves down, the indicator drops. Either way, it’s time to set the hook.

Light line is recommended for fussy crappie. How light? Consider 3-pound fluorocarbon or monofilament to be the max. I generally stick with 2-pound test. No-stretch braided line helps jigs sink fast and increase sensitivity but you’ll have to add a fluorocarbon leader for stealth.

Keep your line in top shape. Coiled mono or fluoro can prevent you from feeling a bite with a light jig. Get rid of line memory by pulling sections of the string to straighten it, or replace with fresh line.

Keeping line twist to a minimum is also important—there’s nothing more unnatural to a crappie than watching a jig spin like a top. Stop line twist by using a straight-line reel or tie a micro swivel 18 inches above the jig. Letting a jig hang so the line can untwist is good practice.

You’ll want a good selection of ice jigs, including horizontal, vertical, and ‘tweener jigs, when crappie are fussy. Different jigs have varying actions in the water—for example, a vertical (teardrop) jig flutters more when falling—and it’s common for fussy crappie to prefer one jig’s action over another.Consider tungsten jigs as well. Denser than lead, a tungsten jig allows an angler to downsize without sacrificing weight. Downsizing is a reliable tactic when crappie are fussy.

Of course, there’s also the jig body to consider. Maggots, waxies, and even tiny minnows are tough to beat when crappie are being picky. It’s a mistake, however, to overlook scent-loaded soft-plastic baits. Finesse tails, ants, nymphs, micro crayfish, appendage-clad creatures, minnow heads—the list goes on when it comes to the ever-growing selection of ice-fishing plastics. If nothing else, they give pressured crappie something different to look at when everyone else is soaking bait.

How slow is slow enough for fussy crappie? A couple of years ago, I fished with hard-water guru, Brian “Bro” Brosdahl, who guides in Minnesota. He put me on a pod of crappie, but the fish were fussy. I asked him for some pointers on the best way to work a jig for fussy crappie.“Try to jig the bait while keeping the rod tip still,” he said.

Think about this statement for a minute. In order to jig without moving the rod tip, you have to quiver your hand ever so slightly—barely at all, really. If you were 10 feet away watching Bro fish, you’d think he was deadsticking the jig. I think of it as micro-jigging.

The reason micro-jigging is so important is because crappie eat tiny invertebrates in winter. These organisms move at a minute scale. Exact replication is impossible, but micro-jigging can mimic the movements enough to fool crappie to hit.

When it’s freezing outside and you’re wearing gloves, micro-jigging can be tricky. The solution is dead-sticking. After working a jig and getting a crappie interested, put the rod on your knee or lay it across a pail and leave it alone. Watch the strike indicator and be ready to set the hook.

Catch rates skyrocket for anglers using portable flashers and LCD fishfinders to help them adjust jigging sequences based on the fish’s reactions, which play out plain as day on the screen.Pay attention to the strength of a fish’s signal, as crappies frequently suspend. When a weak signal appears below a jig, a novice might think the fish is directly below the bait when actually the crappie is suspended off to the side on the far edge of the sonar cone. Also, the display will show the signal slightly deeper than it actually is when the crappie is off at the edge of the sonar cone. The lesson here is to always jig above fish. Remember, crappie feed up, so they’ll be looking skyward for a meal. Jigging up high helps attract fish. More, convincing a crappie to swim up to a jig gets them interested in eating.

Keeping quiet is one of the easiest ways anglers can improve the number of fussy crappie they put on the ice. Drill holes early, so you’re not firing up an auger at prime time. Be aware of light entering into a hole. (When in a fish house this is less of an issue.) Leaving some slush in the hole to diffuse sunlight can make crappies less wary. Avoid letting your shadow pass over an ice hole. The light change from a shadow—and the sounds of footsteps—put crappie on high alert. In shallow water, it can sabotage a good bite.

Sometimes, it’s a good idea to do something different. When fish are attracted to ice jigs but won’t bite, try a small jigging spoon or jigging minnow instead. Going against the grain and upsizing on fussy crappie can turn a pod of fish competitive and get them feeding. It seems counterintuitive, but these lures can trigger reaction bites when slabs are snubbing tiny jigs.A bait-and-switch strategy can also pay off. First, attract crappie with a big, loud lure, like a flashy jigging spoon or rattling darter. Once a fish is beneath the hole, retrieve the hard bait and drop down a small tungsten ice jig. For whatever reason, this works some days, with crappie fooled by the sudden arrival of the small jig.

Another option is to try jigging two adjacent holes (where regulations permit), working one bait in each.