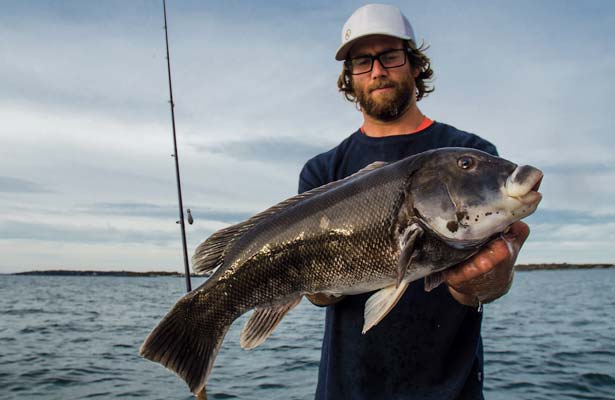 Many fishermen put their bottom-fishing gear away once the last fluke trip is in the rearview mirror. Those who turn their attention to fall bass and blues, or deer stands and duck blinds, are ignoring one of the most fun and addictive fisheries we have—fall tautog.

A member of the wrasse family, tautog are a stout fish with large lips, a broad tail, and a remarkable set of teeth. Juveniles and females more often exhibit a mottled and brown-toned appearance, while males are most often grayish in color. Tautog grow slowly and can live more than 30 years.

• Article: How to Catch Tautog

Tautog feed by grasping mussels and shellfish using their large canine teeth, crushing them with pharyngeal teeth (located in the throat) before swallowing. Tautog are visual predators and do not feed at night.

The environment of the tautog begins and ends with hard structure—rocks, reefs, and wrecks, which means anchoring will occur in some unforgiving territory. A conventional anchor can often get hopelessly wedged into these types of structure. A grappling hook with flexible arms is a much better choice—with enough pressure applied, it will give and come loose. Run a length of anchor chain along the shaft of the anchor and then zip-tie it to the top ring with whatever strength tie will hold the boat at rest. Backing off on this setup when in gear will pop the zip tie and allow you to pull it up from the business end with the least amount of effort.

Although many anglers have tautog gear specifically for targeting these hard-fighting fish, those just getting into it can get by quite well with a medium-striper outfit. As with most bottom fishing, I recommend braided line and use 50-pound test. It might sound a bit like overkill, and as far as strength is concerned, it probably is. I use it purely because it’s easier to work with and tie than the lighter stuff.

For tautog rigs, keep it simple. One hook off a dropper with a sinker snap at the end of the rig is all you really need. Double-hook offerings are very popular, but can sometimes waste too much time untangling. Another option that has gained popularity over the last few seasons is simply impaling a crab on a painted jighead.

The diet of fall blackfish consists primarily of shellfish, including crabs, lobsters, clams, mussels, and barnacles. They’ll eagerly eat a sandworm, if you can get one past the scup, sea robins, and cunners. Almost any size crab can be used to tempt blackfish. Use small ones whole, minus claws and legs, and put the hook into one of leg holes and out another. Bigger crabs can be halved and even quartered, applying the same leg hole procedure. The cut ones will leak out a little “crab ick”, which is also enticing (to the fish)!

Tog fishing may be tricky for some at first because most fishermen try to set the hook as soon as they feel a hit. You must wait for the tog to swallow the bait.

When togging, use rigs with minimal beads, swivels and hooks since they may cause you to get caught in those rocks, reefs, or wrecks. At the tog’s first hint that something isn’t right (such as a hook in the just-ingested morsel), the fish will bolt to the nearest hole or split in the rocks and burrow in as steadfastly as it can. That’s why it’s imperative to get a few turns on the reel immediately, and not giving the fish a chance to react and dig in. Once the realization of what’s going on sets in, a tautog will give you one of the best battles, pound for pound, of any of the fish we pursue in the Northeast. The little ones fight hard for about half the distance to the top. Medium-sized ones, about 16 to 22 inches, typically get a second wind at this point and initiate another scramble for the bottom. The real beasts will resist and struggle from bottom to top, displaying several muscular bursts culminating with a splashy, wet and wild pandemonium until you can corral it into the net.

As hard as you may try to keep them out, a few hooked tog will inevitably make it into the rocks and crevices. When one gets “stuck,” it sometimes can be persuaded out by applying pressure from different angles. Another approach is to let the line go slack and hope the fish will swim out on its own. Patience is the key here. The odds are probably less than 50/50 that the tog will be coaxed out, but you’ll never know unless you try.

Although a tautog has a set of lips like an old tire, sinking a hook into those lips doesn’t necessarily guarantee that it’s stuck well enough to be flipped into the boat every time. The weight of a lightly hooked behemoth can break the already battle-strained strand of tissue that he’s hooked by and, in so doing, break your heart as well. Better to be safe and slide a net under the fish.

Another useful tool in the ‘toggin’ game is a hook puller. This device consists of a length of strong stainless-steel wire with a small hook at one end and a handle at the other. By sliding its hook under the hook in the fish, inverting it in the fish’s mouth and giving it a good shake, the weight of the fish itself is usually enough to pop the hook. This process works especially well with a fish to be released, since holding it over the water allows for minimal damage.

An under-used method for catching tautog is chumming. Chum logs, usually ground clams, are available at many bait and tackle shops. These can be matched with store-bought chum pots or you can make one by drilling half-inch holes into a plastic bucket that has a secure lid. Weight it adequately so that it stays directly under the boat, or else you’ll be scattering chum down-tide, away from your boat.

During the fall, most anglers head toward the mouth of Narragansett Bay and off the Newport oceanfront. Some of the most popular and hardest-fished spots include Whale Rock on the mainland side and Beavertail at the southern tip of Jamestown. The Newport area and the areas to the east contain scores of rocky humps and structures to explore. Although these spots are well worn and usually reliable, they’re not the only show in town. The south shore also offers some great fishing. River Ledge at the mouth of the Narrow River to the entire shoreline from Pier 5 in Narragansett to Pt. Judith can produce blackfish. To the west, areas to try are the walls at the Point Judith Harbor to Nebraska Shoals to Ragged Reef farther west off the Washington County coast.

Buzzards Bay is full of rocky structure that hold fall tautog. Dumping Rocks is a great starting point for fishermen leaving from a Massachusetts South Coast ports. For fishermen on the Cape Side, the Weepeckets are worth a look before venturing down the Elizabeth Island chain, which is loaded with rocky structure and big, unpressured tautog.