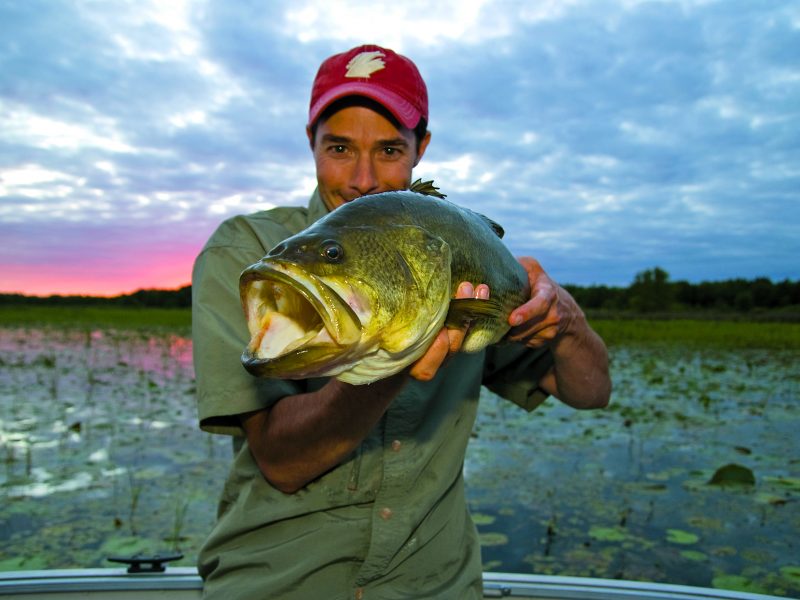 As a warm-water species, largemouth bass like it hot. Consistent, stable summer weather spurs them to feed, which is good news. Light intensity is an important factor, though. When you’re wearing sunglasses to stop squinting, largemouth are likely hanging in the shade for relief from the sun’s rays. Docks, overhead timber, sunken tree stumps, and canopies of thick vegetation are areas largemouth tuck under when it’s sunny. Flipping a jig or running a crankbait around these shadowy spots catches bass in these scenarios.
As the day ends, the sun’s angle shifts, and light becomes less intense. The entire food web gets active. Bass tucked tight to cover in the day actively hunt and roam come evening. It’s one of the best times to fish for them in summer. What follows are three reliable strategies for catching largemouth in low light. While many lures catch bass during the bookends of the day, topwater and subsurface baits are the most consistent. Positioned high in the water column, bass can locate these lures’ silhouettes in fading light.

If I had to pick one spot to chase largemouth in low light, it’d be emergent and floating vegetation. Lily pads, rice, arrowheads, slop, clumps of weeds—the list goes on. This greenery is prime turf for prowling largemouth during low light because baitfish, frogs, salamanders, rodents, birds, and bugs all live in these marshy areas.
Generally, the bigger the area, the better because it gives more square footage for bass to live. More space can mean better numbers and larger fish. Backwater areas in large rivers are prime locations; in lakes, look to large bays and coves. The property value increases when a tributary is present because current keeps oxygen and nutrients flowing into the area.
Focus efforts on points and bends in the vegetation, which act as travel corridors for bass moving in and out of the weeds. Expect active fish to be on the outer edge and watch for patches of isolated cover. It may seem counterintuitive, but big bass often hold under small, remote pieces of vegetation or timber. Open pockets within mats of weeds are also prime casting targets.
A hollow-belly frog is a top pick for fishing these spots. Popular choices include the Booyah Pad Crasher Frog, Jackall Iobee Frog, Lunkerhhunt Lunker Frog, LiveTarget Hollow Body Frog, Reaction Innovations Swamp Donkey, Snag Proof Bobby’s Perfect Frog, Spro Dean Rojas Bronzeye Frog, and Terminator Walking Frog. A soft-plastic toad Texas-rigged with a wide-gap, offset hook is an appropriate alternative. 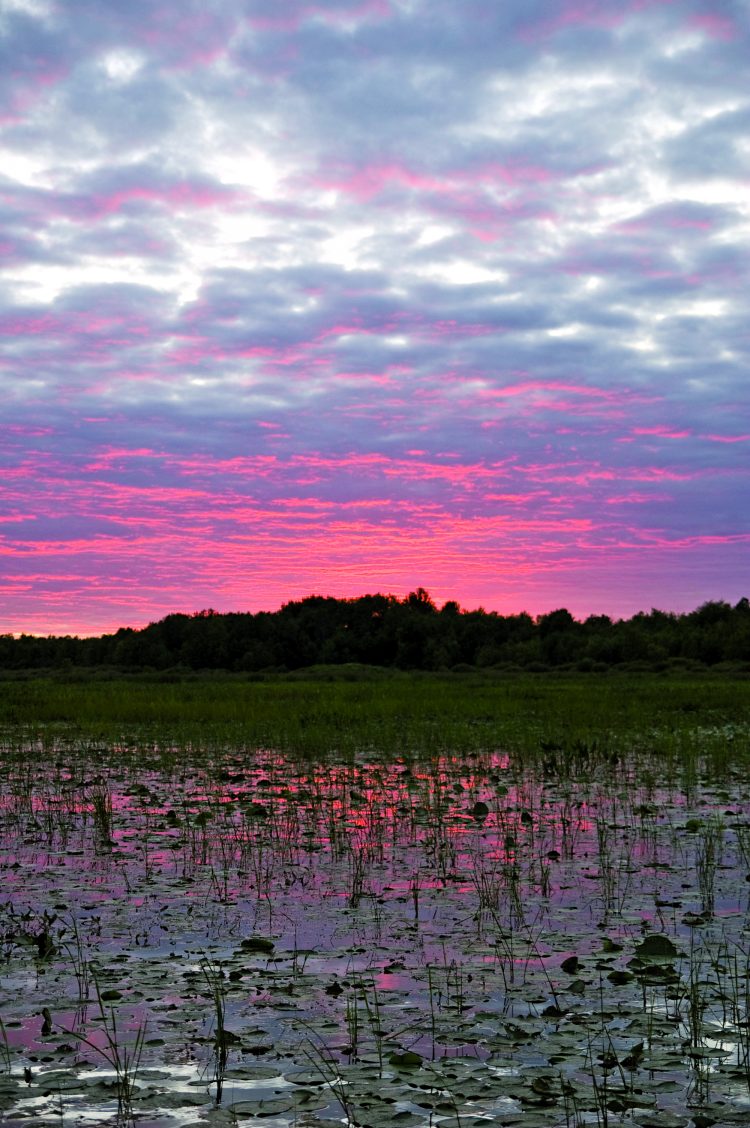 Being weedless, frogs run through thick cover well. This lets an angler cast a frog on shore, then slip in the water with a gentle splash–a maneuver that fools big bass. A frog also “matches the hatch,” so to speak. It’s a Kermit copycat, but also decoys other surface-swimming snacks such as mice or a struggling sunfish. Fishing a frog is not brain surgery. Cast it out and work it in. During the day, I generally fish a frog quickly to portray a panicking scurry across the surface and trigger reaction strikes from bass. As twilight arrives, a lazier pace is better. A bass’ striking accuracy can suffer as light fades, so slow down and add pauses to make it easy for fish to find and eat the bait.
Another low-light approach is getting the frog into an opening in the weed growth, and then using rod twitches to move it side to side with a walk-the-dog action. Add pauses. When you know bass are in the area, this tactic gets them biting. At times, bass smack or push a frog first, then come back a second time to eat it.
I use a 7-foot 4-inch, heavy casting rod when fishing frogs because it delivers the power and leverage for pulling big bass from thick weeds. A high gear-ratio reel that winches in 30 inches of line per reel crank also helps clear the bass of the debris. I tie frogs to 65-pound-test high-vis braid. The yellow string is easy to spot, making it easy to locate the frog after briefly taking my eyes off the bait. I color the last 10 feet of line with black permanent marker to keep the business end stealthy.

Shallow and mid-depth weed flats are another area where largemouth stalk prey during twilight. The difference between these zones and the areas mentioned previously is that the tops of the plants rarely touch the surface. The space above the greenery is where the action unfolds at dusk.
As with daytime flat strategies, concentrate on spots containing something different than the overall uniformity of the area. Rock piles, changes in plant species, old creek channels, patches of pencil reeds, and sandbars are examples. Finding these areas during the day and entering them as GPS waypoints will pay off come evening.
This was the strategy my friend, Craig Lister, and I used last summer. We got on the water in the afternoon and soon patterned largemouth around isolated sand patches and pencil reeds tuffs within weed flats. Many of these zones coughed up bass at dusk.
Craig did well using a 5-1/2-inch Jackall Ammonite Shad rigged on an unweighted 5/0 swimbait hook with a screw-lock keeper. Other solid body, paddle-tail swimbaits are the Berkley Powerbait Rib Shad, Keitech Swing Impact FAT, Reaction Innovations Skinny Dipper, Strike King KVD Swim N Shiner, X-Zone Swammer, Z Man Scented Paddlerz and Zoom Swimmin’ Super Fluke. 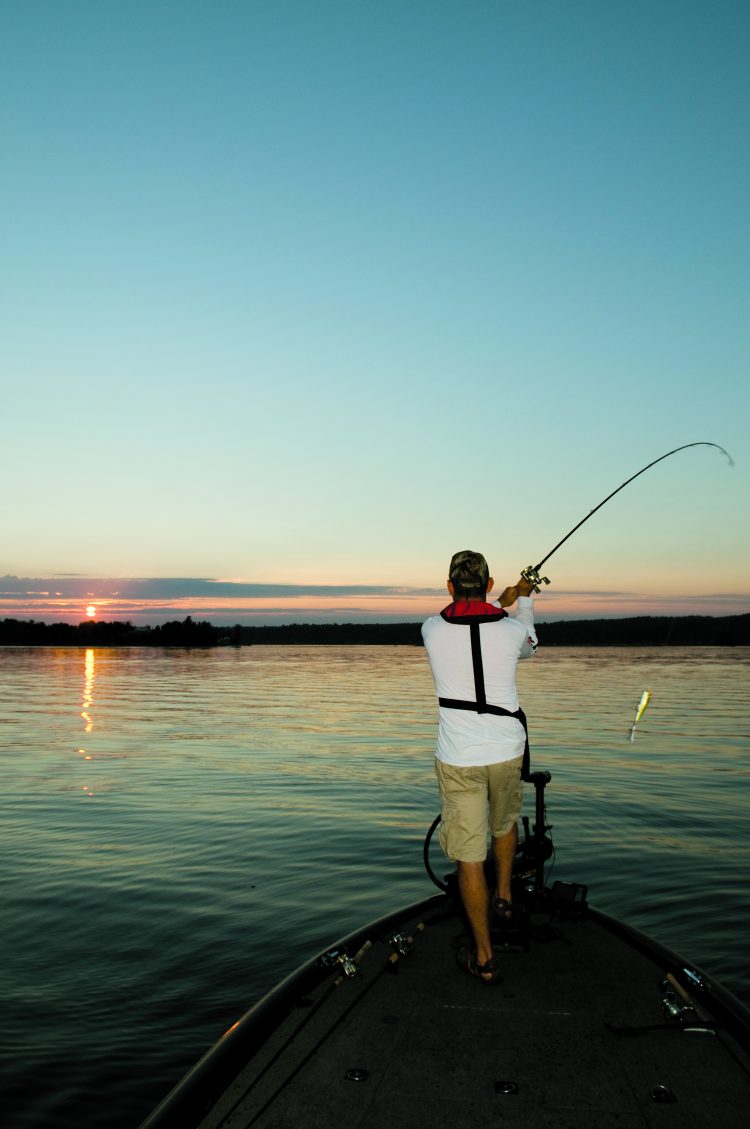 Craig ties the swimbait to 50- to 65-pound-test PowerPro braid that floats and helps the swimbait stay on top. Here is how Craig described working the swimbait: “The basic retrieve is like hopping a plastic worm across the bottom, but in this case it is across the top of the water,” Lister said. “Make a cast, point your rod tip toward the bait and as soon as the swimbait hits the water, lift your rod tip from a nine o’clock position to an eleven o’clock position, reeling at the same time. This is how you get the swimbait to start swimming on the surface. Keep reeling, dropping and then raising the rod for the whole retrieve. It’s not meant to be fished at a superfast speed, but more of a steady pace. The swimbait’s tail will flicker on the surface. Then, when your rod tip drops for a second before retrieving more line, the swimbait will pause before swimming again. This is usually when the bass strike. The retrieve makes a swimbait look like a baitfish trying to flee by flickering on top.”
Working the surface-subsurface zone, combined with lots of vibration and splashing from the bait’s tail, makes this presentation well suited for low-light largemouth. Weedless rigging lets Craig work it around vegetation and timber without hang-ups.

Bank habitat contains many areas to catch bass. The section of water adjacent to shore is full of life including frogs, baitfish, and crayfish. Should they fall into the water, chipmunks, mice, dragonflies, and other terrestrial critters are also on the menu.
Largemouth tucked under docks, fallen trees, and other shady spots come out to feed on an array of prey near the shore as light fades. The bank, as well as shallow drop-offs, are natural contours fish relate to when roaming for food; likewise for inside and outside weed lines. Expect points to hold active bass too, so be sure to cast to these spots.
Watch for shoreline variations: a natural bank comprised of trees, grass, and reeds that changes to structure such as riprap, boulders, or a concrete wall. Edges such as this will concentrate bass. Similarly, largemouth mill around isolated rocky reefs or strewn timber found on sand and pea gravel bottoms.
A wake bait is an excellent pick for fishing shorelines because its surface disturbance attracts bass from a wide area the bass home in on the lure’s wake. Rattles add another sound dimension that appeals to largemouth. Popular wake baits include the LiveTarget Bluegill Wakebait, Livingston Lures Pro Wake, Lucky Craft LC Wake Crankbait, Mann’s Baby 1 Minus or Rapala DT Fat Crankbait, Storm Arashi Waking Crank, and Yo-Zuri 3DB Series Wakebait. 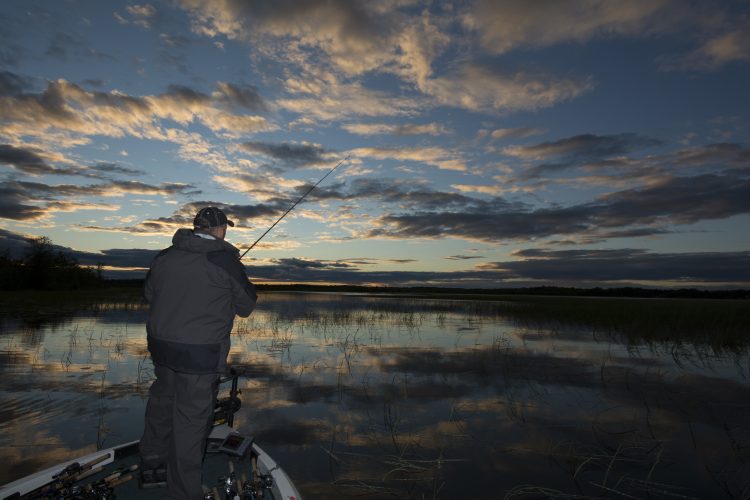 A straight swimming retrieve accented with an occasional pause is all it takes to catch largemouth on a wake bait. Be on the lookout for cover, such as standing timber and lily pads. Change the rod angle to steer the lure towards these obstructions since bass often lurk nearby. Contacting the obstacle with the bait can also trigger bites.
I use a 7-foot, 2-inch moderate, medium-heavy casting rod to toss wakebaits for largemouth. Monofilament in 12- to 15-pound-test get the nod for its cushiness and floating properties.
As the day draws to a close on your favorite lake this summer, try these strategies for catching low-light lunkers. Tossing lures into twilight will add more bass to the day’s tally, quite possibly the biggest ones to boot.