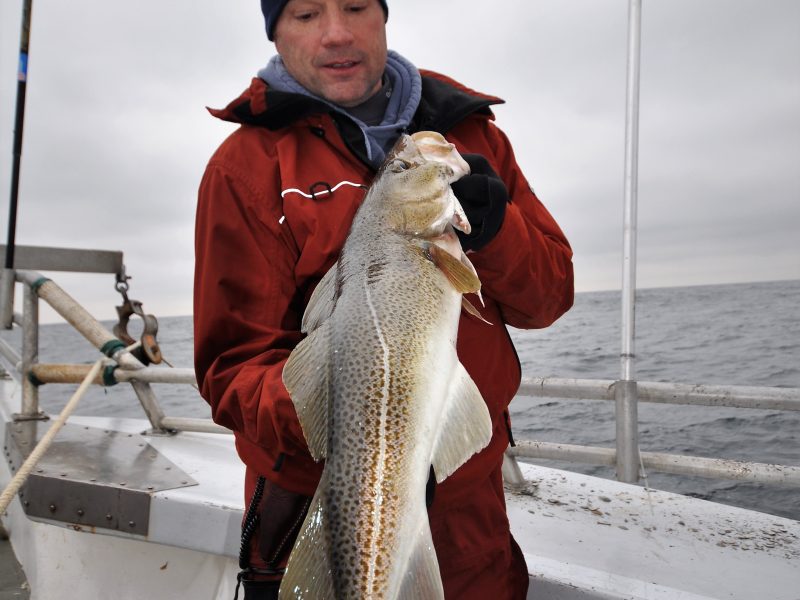 “The winter cod fishing in Rhode Island can be amazing,” said Captain Rick Bellavance, president of the Rhode Island Party and Charter Boat Association. “The cod school in shoal water south of Block Island, offering an awesome opportunity to get out on the water during the winter months.”

Although cod are available throughout the year, the winter cod-fishing season is something special. It generally starts mid-December and continues into March. Few private boats are still in the water after Thanksgiving, but in Rhode Island, several party boats and a handful of charter boats fish throughout the winter for cod.

When my father was a young man, Rhode Islanders caught cod from shore. Anglers reported catching as many as 10 fish up to 60 pounds in one outing, but this is no longer possible. There are very few cod close to shore, as they have received so much commercial fishing pressure over the years that they are no longer plentiful.

Cod are cold-water fish, and with climate change and warming water along the northeast continental shelf, some scientists hypothesize that cod are shifting to deeper, cooler water. However, Capt. Frank Blount of the Frances Fleet believes southern New England cod are not following normal climate change patterns.

“Fishing is getting better in Rhode Island waters, with anglers now catching cod closer to shore when looking for tautog in the fall. I am not a scientist, but I believe there are three distinct cod stocks. The southern New England stock is doing well, the Gulf of Maine stock is slowly improving, and the George’s Bank stock is not in very good shape.” said Blount.

Captain Peter Bacon of Big Game Sport Fishing Charters noted, “The fish off Rhode Island seem to be getting larger. We’ve always gotten nice market cod, but not the 35-pound fish we have been catching lately.”

Fishing in recent years off Rhode Island has been excellent. Captain Richard Chatowsky of the charter fishing vessel Drifter commented, “Fishing has improved in the last few years. Last year, the season was short, but it was one of the best as far as intensity. There were cod in the 25-pound range and pollock to 20 pounds mixed in, chasing the herring and mackerel. Keeper fish averaged about 12 pounds last season.”

Captain Chris Cullen, owner of the Island Current III party boat, said, “We had epic years in 2010 and 2011 right around Block Island. Overall, fishing last season was first-rate. It works the same way now as it always did—if you find the bait, you find the fish.”

Captain Andy Dangelo, who runs the Seven B’s party boat in winter months when it fishes for cod, has also seen an improvement in the fishery. “In the past two years, fishing has been better. We fish south of Block Island as well as at Coxes Ledge. In the winter, we often get a pile of fish, and when they are here the fishing can be good, and then it shuts off. The fish may move after a storm, and then it is a matter of finding them again.”

Captain Tony Guarino of the charter boat Booked Off said, “Over the past five years, things have been getting better, with decent winter and summer fishing. We do about 130 trips a year, and 60 to 70 of them are cod trips.”

Where to Find Cod

Cod are bottom fish, and when they are not aggressively feeding, they stay on the bottom, often near structure—underwater wrecks, rock piles, holes, humps, and drop-offs —  waiting for prey to come by. So, you must go to where the fish are to catch them.

Captain Rusty Benn of the Seven B’s party boat noted, “Cod have been left alone most of the season since anglers spend most of the fall targeting different species. So, we regularly find them right around Block Island in December and January. We like to fish an open bottom near structure, though one of the biggest challenges is not finding cod, but avoiding the dogfish.”

According to Bellavance, “If fishing on your own boat for cod, plan to move around a bit. Keep an eye on your chart plotter and try each hump and bump. Focus on one area and hit the spots in that area hard, trying each at different times of the trip. Take notes throughout the day – over time, you will have the info to succeed each time you go.

“To find cod, recreational angler Rich Hittinger makes sure to have a quality fishfinder. “A cod has a swim bladder and shows up well on a good fishfinder. Many trips, we have spent 30 minutes driving around the area until we see piles of fish. When we stop right on them, we get hit immediately.”

To catch cod, a simple bait rig with a hook or two, a bank sinker that holds the bottom, and plenty of sea clams are usually all you need. Fishermen also use jigs of various sizes, colors, and weights, depending on conditions. Cod will generally eat anything that is in front of them. They are not picky, but you must get their attention, and jigs usually do this well. A common setup is a diamond jig with a colored teaser tied about 12 inches above. Some anglers tip the jig and teaser with fresh bait (pieces of sea clam).

Captain Cullen said, “We buy the best bait we can, and we chum an awful lot. I recommend a simple high-low rig with no ‘jewelry’ on it, and suggest stringing the bait naturally, instead of creating a big clump on the hook. A barrel swivel at the top of the rig helps eliminate twisting.”

Captain Guarino also fishes high-low rigs, preferring to bait the bottom hook with clam, but putting a plastic bait, like a shad or curly-tail grub, on the top hook. “One half of our hits come on the top hook with artificial bait. This works particularly well when sand eels are running, and it helps keep the dogfish away. However, jigs are still my favorite way to catch cod. We use a slow-pitch jig made by Yo-Zuri; fish usually hit the jig on the drop.”

“I also like using a Viking jig with a teaser above, with pink and green colors generally working well for me,” said Captain Chatowsky. Grub-style teasers also work. The jig weight varies depending on tide and current, but 8 ounces is what we are often in the water with.”

Cod fishing experts use 7- to 8-foot rods with strong backbones to handle the heavy rigs. Some party boat captains suggest using monofilament line to avoid time-consuming tangles with fellow customers. However, most captains admit that braided line has benefits because it is stronger, more sensitive, and creates less resistance in the water, which allows anglers to hold bottom with less weight. Captain Dangelo said, “Braided line is important to create that direct contact with the fish. The less line out the better, and with braided line you won’t get the big bow in your line compared to monofilament.”

Winter cod fishing is always going to be cold. An angler should wear layers of clothes with an outer layer that can repel water since spray and precipitation are likely. Wear warm, waterproof boots and bring a couple of pairs of gloves. Captain Blount said, “The winter weather is unforgiving. If anglers are fishing in private boats in winter waters off Rhode Island, they must be extremely cautious. Even if the weather is warm, the water is still frigid. And, the seas are often high because the warm temperatures are blowing in from somewhere.”

This story was originally published in the New England Edition of the January 2019 Angler’s Almanac.

For recreational anglers, party boats, and private charters, cod musthe fish must be at least 21-inches in length, according to the Department of Environmental Management. Each angler is allowed to keep 10 fish a day.

Article: The History of Cod

Article: 5 Guys You Meet on Every Party Boat