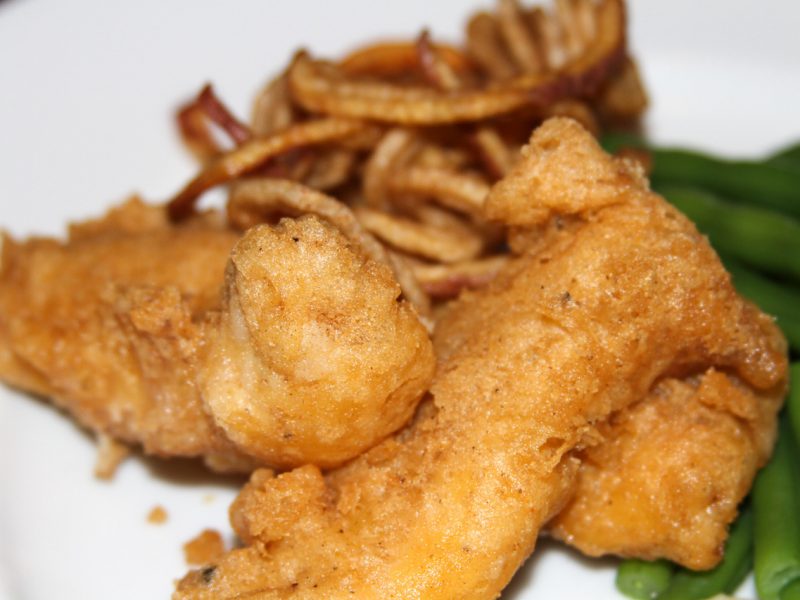 While recently researching various beer-batter recipes online, I discovered an interesting revelation. Every recipe I found, it seemed, was drastically different. In order to fine-tune a recipe, I went to 10 different sources, printed them all out, and dissected the ingredient lists. I consulted Martha Stewart, Emeril Lagasse, Gordon Ramsay, Alton Brown, Paula Dean and five other reputable sources. No two recipes matched up.

For instance, four recipes included eggs in the batter, one called for just an egg white, and the remaining five had no mention of eggs whatsoever. Three recipes used just flour, while the others called for varying amounts of cornstarch and/or baking powder in addition to flour. Some recipes have you coat the fish in flour before it goes in the batter, but some do not. Three mentioned refrigerating the batter for a half hour; the rest had no mention of this step. And as for the beer? Well, that was all over the map as well. Three recipes called for an ale or lager, one swore by IPA, and the others claimed that a dark beer gave the best results. Even the cooking temperatures were inconsistent, ranging from 350 degrees to 375 degrees. And what kind of oil is best? Depends on who you ask … vegetable, canola, peanut, or safflower?

The more I studied them, the more confused I became. There was only one thing to do. I headed to the liquor store, bought a bunch of beer, went home, and fired up the deep fryer.

I narrowed down my taste test to the five recipes from the aforementioned celebrity chefs. Here is what I discovered. 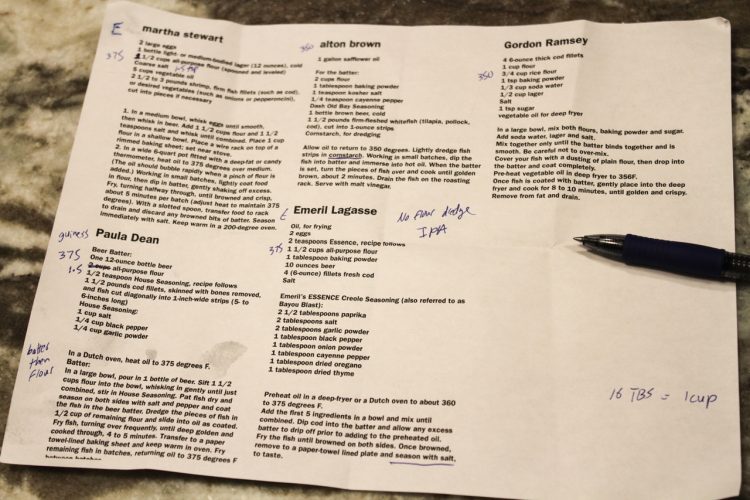 I experimented with four different types of beer: pale ale, nut-brown ale, Guinness, and IPA. I could detect no difference in flavor in the final taste. The batch I made with Guinness did have a slightly darker color, but it was barely noticeable. My advice? Save the good beer for sipping, and go ahead and use the cheap stuff in your batter.

Two of the five recipes included eggs in the batter, which resulted in a softer, doughier coating. If you like your fried fish nice and crispy, like I do, skip the eggs. 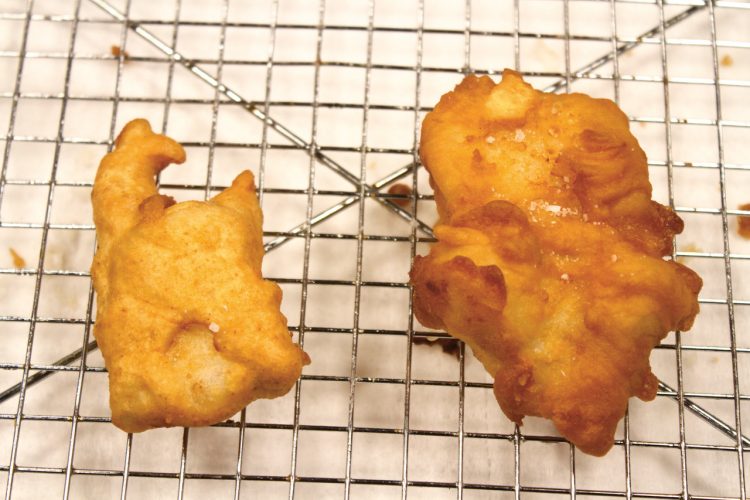 Chef Gordon Ramsey’s recipe was the only one that incorporated rice flour. (He calls for 1 cup flour, and 3/4 cup rice flour.) Rice flour is what gives Japanese tempura its light, crispy crust. His recipe was, by far, the crispiest.

Two of the recipes called for dusting the fillets in flour before dipping in the batter, one called for a dusting of cornstarch, and two had no mention of this step whatsoever. I could not detect any difference between the versions with flour versus cornstarch. However, the batch I made where the fish went straight into the batter was the clear-cut loser. The crust easily crumbled and separated from the fish after it cooked. Dusting your fillets in flour (or cornstarch) before dipping them in the batter is indeed a critical step. 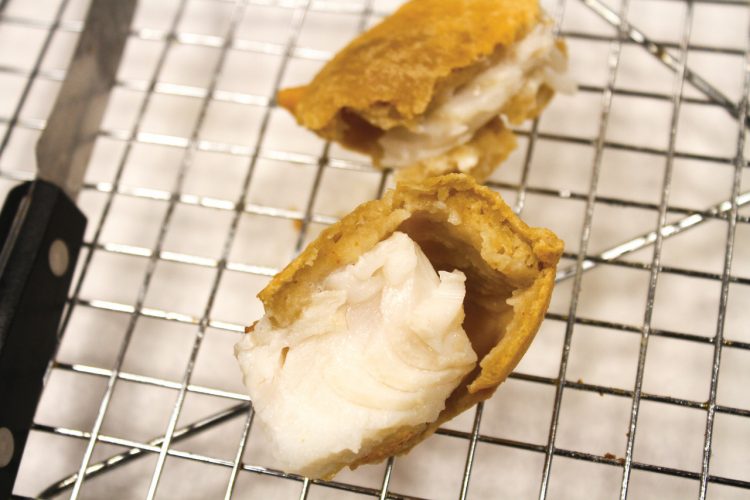 Always dust your fish in flour before coating it in batter, which helps the crust stick to it. This crucial step was skipped in the photo above.

Paula Dean’s recipe had an unusual twist to it. In hers, you dip the fish into the batter, then back into flour, and then into the hot oil. I had never seen or heard anything like this. It sounded a bit bizarre and unnecessary, but after trying it, I am now converted. It resulted in a fried fish with a super-crispy exoskeleton and an enhanced golden-brown color.

Martha Stewart’s batter was the simplest, calling for beer, egg, flour, and salt, but I found it to be a bit bland. Emeril’s recipe called for eight different spices, which I felt overpowered the delicate flavor of fresh fish. A bit of salt, chili powder, white pepper, paprika, and garlic powder provided the winning flavor. Another interesting addition came from Gordon Ramsey. His recipe called for the addition of a teaspoon of sugar. I tried it, and I liked it!

Some recipes call for letting the batter rest in the refrigerator for a half hour. I tried it and couldn’t tell if it made any difference in the final product. It seems like the whole purpose of using beer is to induce carbonation. When the batter rests, it loses this effect. Why bother?

Of the five recipes I surveyed, two called for cooking at 350°; the rest called for 375°. Cooking time varied from two to ten minutes. I preferred the crispier crust of the fish cooked at 375°, although I was working with relatively small pieces of fish. If you are cooking a large, thick fillet, 350° might be a better way to go. At 375°, four minutes was the perfect cooking time for the haddock fillets I used. 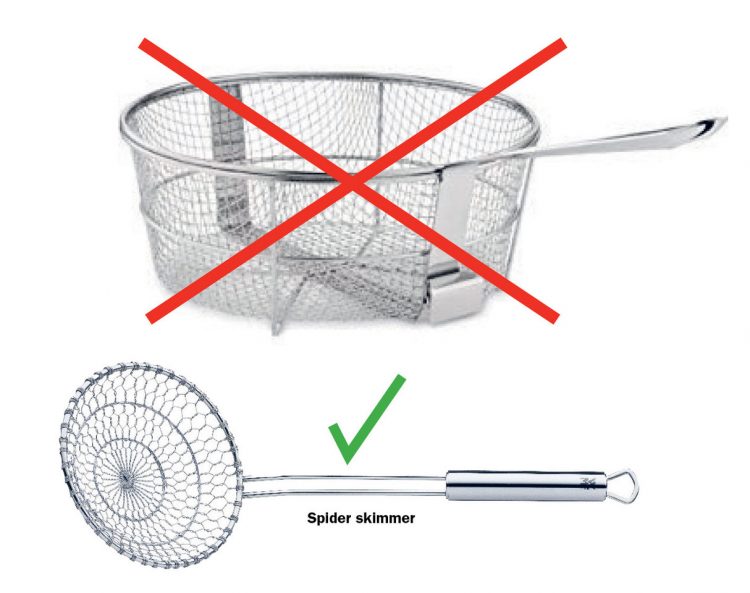 When deep-frying anything battered, avoid using a frying basket. The wet batter can become fused to the basket, and the crust will break when you try to remove it. Instead use a spider skimmer to remove your fish from the oil.

After testing five recipes, I have developed this Franken-recipe that uses different techniques from different recipes. Give it a try! You will not be disappointed.

Whisk together the dry ingredients listed above, and then stir in the beer until the batter is smooth. It should be the consistency of pancake batter. Arrange two plates; add about 1/2 cup additional flour to one, and an additional 3/4 cup of rice flour to the other. Lightly salt your fish (which should be room temperature), roll it around in the rice flour, then dust in the other flour until it’s well coated. Dip the fish in the batter until it’s completely covered, roll it back in the rice flour, and then gently drop it into 375° oil. Cook until golden brown, about four to five minutes. Your eyes and ears are the best way to tell when it’s done. Listen carefully – when the bubbling, hissing, and popping begins to subside, the fish is done. Remove it and let it rest for a minute on a wire rack. Serve immediately with some lemon wedges and tartar sauce, aioli, malt vinegar, ketchup, or whatever condiment catches your fancy. So yummy!