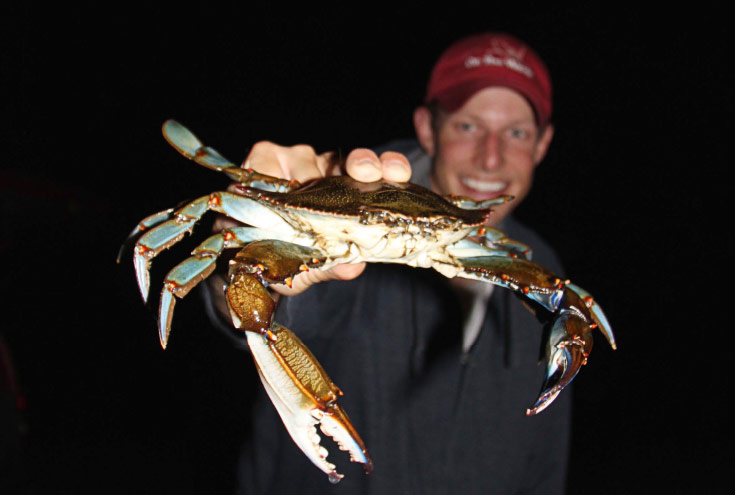 Of all the creatures in our waters, big and small, fast and slow, dainty and gruesome, few are more accessible to the general public than Callinetes sapidus, the blue claw crab. As back-bay catches of stripers, weakfish, fluke and blues begin to wilt under summer’s swelter, this feisty crustacean continues to answer the bell in tidal creeks, around docks and deep inside backwater coves. Mostly, they scuttle about Jamaica Bay, the South Shore and the Peconics, but poke around and you’ll find a few of these treasures in remote recesses of most North Shore harbors, too.

There was a time when Long Island crabbing was primarily a late-night affair. Nowadays, though, with many formerly productive public shoreline access points sporting “Private Property” or “No Parking” signs, the pursuit is just as much a daytime sport. As such, trapping, hand-lining and “scapping” all now rival nighttime “jacking” for gathering these tasty treats. Here’s a brief look at each of these techniques, along with a few tips on how to round up enough of the succulently sweet critters to boil up a huge blue claw feast this summer.

Working the night shift is still the fastest and easiest way to garner a blue claw dinner. Like mid-summer stripers, summertime blue claws tend to drop their guard after dark, rising to the surface and swimming with the tide as they feed and change location. This makes them easy targets for crabbers using extension handle nets from well-lighted docks, bulkheads, tidal creek bridges and shallow draft boats.

For the shore-bound, nighttime jacking depends on having a decent light source and sufficiently strong tidal current. You’ll often find these two factors intersect at the deep end of a dock or near the central channel where a tidal creek slides under a small bridge. Since such prime crabbing real estate is generally at a premium, head out early to stake your claim at a spot where moving current will bring the crabs toward you, making them relatively easy targets.

From a boat, late-night jacking is best accomplished by motoring slowly against the current while shining a flashlight on the water slightly ahead of the bow. When a crab is spotted, the driver maneuvers the craft in line with the swimming creature while the netter, keeping the light a foot or two to the side of the crab, waits until the last possible second before plunging the net under the crustacean.

Whether from boat or shore, the timing of the scoop can be difficult to master at first. Dip the net too soon, and the crab quickly sounds or changes direction. Wait too long, and you’ll miss your chance. It’s also important to avoid shining the light directly on the crab as the larger, more skittish ones are easily spooked.

As a general rule, the best nights for jacking are dead calm, sticky ones, when the surface lies so flat that needlefish leave wakes and minnows can be seen skipping about. Add in a bright moon and you might find it possible to actually spot some crabs as their back flippers disturb the surface. Give this a try from any brightly lit dock on the South Shore, on the Copiague, Babylon or Hecksher Flats in Great South Bay, in Harts Cove on Moriches Bay, or in Tiana and western Shinnecock Bays.

TRAPS ARE HARD TO BEAT

Nighttime crabbing is simple—see the crab, scoop the crab. A daytime junket requires more thought and preparation. For working depths greater than 6 feet, daytime crabbers find “trapping” the most effective approach. There are several inexpensive box-style crab trap types available from tackle shops these days, but don’t over-think this because they all work. Still, I favor the pyramid style as it seems to close reliably with very few door tangles.

Trap bait can be chicken parts, whole squid or any oily fish such as bunker, mackerel or bluefish. Over the past few years I’ve pledged my allegiance to raw chicken wings and chicken legs – they are both irresistible to the crabs and very affordable. Whichever bait you choose, secure it firmly to the center of the trap floor with a length of soft wire because blue claws are dexterous bait stealers that can quickly make off with any loose pieces.

From an anchored boat, traps are simply lowered over the side until they rest on the bottom. If you ease them down, they’ll settle in an upright position and you may even be able to feel the doors fall open as the line goes slack. When crabbing from a dock or shore, it may be necessary to toss the trap several yards. Do this underhand so that the trap lands upright as it hits the water and then allow it to sink on a slack line. (Don’t forget to hold onto the line or secure it before tossing the trap.)

Once the trap is nestled on the bottom, doors opened, all that’s required is patience. This type of crabbing is pure guesswork since there is no way of telling if a crab has entered the trap until you give a pull. Just wait five to 15 minutes before using a quick and continuous hand-over-hand motion to haul it to the surface. With a little experience, you’ll be able to feel the crabs scampering around inside as you lift up the trap.

Good places to position traps include near wooden pilings and pieces of hard structure, along channel edges that border shallow flats, and in pockets of comparatively deep water found at the mouth of a tidal creek. Avoid areas with strong current as the trap may roll over on its side. On Great South Bay, the Lindenhurst Town, Bergen Point, Bay Shore, West Sayville and Patchogue docks are all good starting points for trapping blue claws. So is the Union Avenue, Smith Point Park and Osprey Park docks on Moriches Bay.

Need more challenge? Then try using a hand-line to catch your crabs. These are nothing more than a 30- to 40-foot length of thin cord or fishing line with a large chunk of bait secured by a big hook on one end.

The line, sometimes weighed down by a light sinker, is tossed out into a crabby-looking hole and allowed to settle to the bottom. After a few minutes, a blue claw should find the bait and try to carry it off, usually down-tide if there is current. Upon seeing the line start to move, the crabber begins a gentle game of tug-of-war, pulling the crab into a position where it can be netted.

Hand-lines work from either boat or shore, but they score best in water of 6 feet or less and during periods of low light and moderate current. In deeper water, or on bright days, the crabs tend to let go of the bait before they near the surface. Thus, this method works best in shallow creeks and coves, or off docks that feature relatively shallow water tight to the shore. For best results, try it in a dockside shadow line for superior results.

The crux of hand-lining is to lift the crab slowly and smoothly off the bottom, but knowing exactly when to scoop is often the breaking point. Plunge the net too soon and the crab will let go and sink back to the bottom; too late and you’ll have the same result. In either case, just drop the bait straight back down and your quarry will probably grab hold again.

Hand-lines are effective in just about any shallow water area. They are particularly popular in the tidal creeks of Moriches, Shinnecock and Peconic bays.

TEST YOUR SKILLS WITH SCAPPING

During the daytime, blue claws often swim up to and cling on the sides of docks, bulkheads, pilings and even boat transoms. Those who choose to hang within sight of the surface are fair game for the alert crabber employing a method called “scapping.”

To scap blue claws, slowly patrol a bulkhead edge, peering into the water as you walk along, while being exceptionally careful to not stumble over boat cleats, hoses, mooring lines, etc.

When you spot a crab hanging onto the side of any structure, position yourself slightly to its side and quickly plunge the net into the water about 10 inches behind the target. Reach down under the crab and pull the net back up, keeping the rim in touch with the dock to prevent the crab from escaping. The initial thrust should be explosive enough to catch the crab off guard. After that, the retrieval can be more moderately paced and controlled to prevent breaking apart any soft shells.

Blue claws at dockside are extremely wary and acutely aware of changes in sunlight. Cast a shadow across their position and they’ll likely dive for the bottom. Thus, when stalking in this manner it’s best to walk toward the sun whenever possible. This positions your shadow to the rear where it can do no harm. As a rule you’ll find dockside “hangers” favor shaded areas. You’ll also encounter a fair number of “doubles” and soft shells using this method.

Current New York law requires blue crabs with a hard shell measure at least 4.5 inches from point to point across the carapace (top shell). Soft shells must be 3.5 inches to keep. Crabs in between these stages, known as peelers or shedders, need to be at least 3 inches from point to point. “Sponge crabs,” those carrying eggs on their undersides, must always be released immediately. Many veteran crabbers also toss back the females as a conservation measure. You can easily identify the ladies by the wide triangular segment on the underside of the shell. Males have a segment that looks like the Washington Monument. Keep in mind as you head out that access to some docks—or the opportunity to try crabbing—may require a town or village permit.

Where can you scap with success? Just about any place that features a continuous bulkhead should provide some opportunity, but note that many marinas specifically prohibit crabbing. One sure bet is Shinnecock Canal, where the action can be outstanding on overcast summer days while the locks are closed.

However you choose to catch blue claws, be sure to keep them alive until it’s time to start cooking. They’ll live a surprisingly long time if kept moist but not covered with water—tossing a wet rag in the cooler works well to this end.

And remember to watch out for those claws. Consider using a pair of longhandled tongs to grab your catch after it has been removed from the net or trap. If you need to pick up a crab bare-handed, grasp the back flipper tight to the body from behind. This will keep you away from the business end of Mr. Blue Claw. Remember, the idea is that you should be eating crab for dinner—not the other way around.