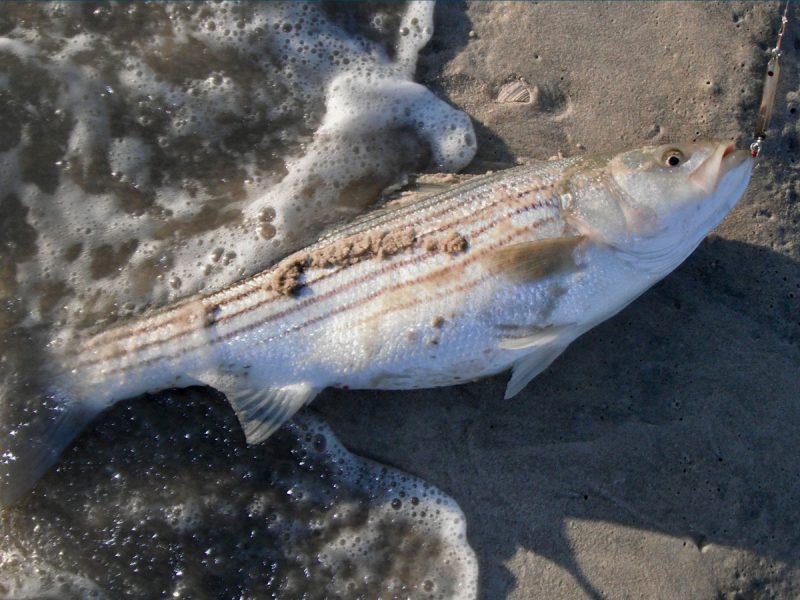 Flash back to the early 2000s and the fall runs before Super Storm Sandy, when there was a pretty decent sand eel bite along the surf lines until the peak of the action in 2011. Fishermen lined up along the water in Long Island and New Jersey, catching good numbers of stripers into December.

Sand eels are popular among surfcasters because they dig into an area and don’t move far, making for reliable fishing. And, they return to the same areas year after year. But, after Sandy, the sand eels stopped moving into the surf in the fall.

There have been seven fall runs since the sand eels last hit the surf in large numbers, but I’m beginning to see signs that things are about to improve. Over the last few summers, I have seen an increase in the number of sand eels being spit up by summer flounder and snapper bluefish. Late last fall and into December, sand eels hit the surf, bringing with them vast numbers of schoolie stripers.

Back in 2011, I’d wake up around 3 a.m. and, during the hours before first light, catch stripers by slowly working my favorite needlefish plug along the bottom. When fishing one of these plugs, there is a very aggressive strike and hook-up, making it one of my favorite ways to fish.

Around first light, I saw stripers swirling as they fed on sand eels, sometimes sending the baits spraying into the air. At that point, I switched to a long, slender swimming plug like a Daiwa Salt Pro Minnow or my Bernzy Baitfish Commander. I cast toward the swirls and slowly crawled the plug so that it swam just under the surface.

That bite never lasted long because as the sun started to shine, the action moved deeper and further from the beach, meaning it was time to break out the heavy stuff. I needed metals, with or without teasers, to reach the fish. Dragging them over the sand, which perfectly imitated the sand eels, was the ticket for catching until the bait and fish moved far off the beach and out of range.

This happened like clockwork almost every day. There were one or two occasions, though, if I was lucky enough to get some fog or extended heavy cloud cover in the morning, when the bite lasted longer. One day, I caught fish until noon, then we headed to lunch during slack tide. Afterward, I returned to the same spot for the incoming tide and, with the fog still thick, caught fish into the dark and left them biting. I will remember that day for a very long time.

Surfcasters are split 50/50 about whether sand eels mean better fall-run fishing. When the bait stays in one location for weeks at a time, things can be great, but crowds can build up at the productive areas. Things can get so bad that the location becomes almost unfishable.

For fishermen who were on the bite since it began, or for those who work the area regularly regardless of the reports, having the masses set up shop can be frustrating.

Also, since the fishing itself does not vary much, if nothing’s biting, casting dragging metals is not a very interesting way to fish. It’s not the same as chasing schools of peanut bunker along the coast, waiting for them to get blasted by the next large school of striped bass or bluefish.

The ultimate fall run would bring both sand eels and peanut bunker into the surf to provide both daytime blitzes and nighttime bites. Let’s hope that no tropical systems or back-to-back nor’easters flush out all the peanut bunker this month, and keep our fingers crossed that the sand eels will creep back in toward the beaches as the water temperature drops.