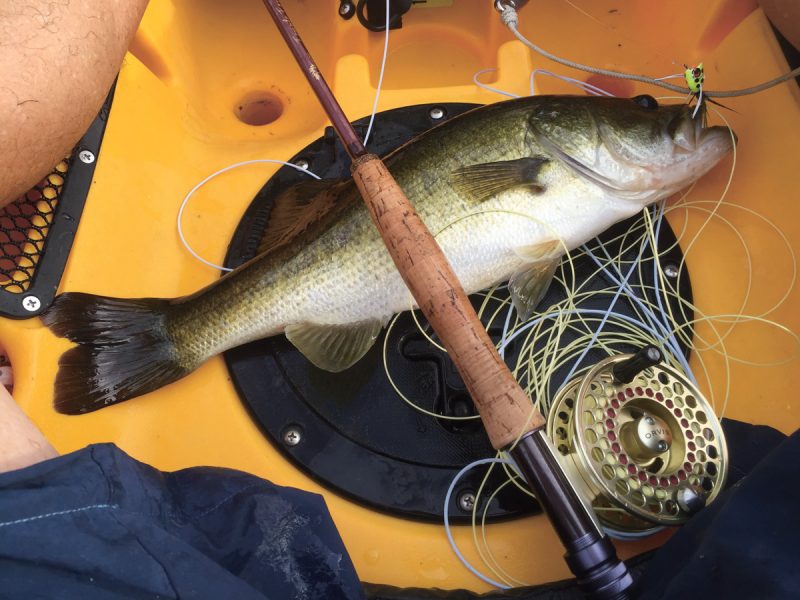 So, the night before you want to fish, the weather forecast is 20 knots, the surf’s all roiled up, and your favorite back bay is going to look like chocolate milk. What do you do now? An optimistic flyrodder might go ahead and make the trip to the beach or bay, hoping the forecast is wrong. But, if the weather forecaster is telling the truth, all that’s left is a side trip to the local tackle shop for coffee, doughnuts, and to do a little groaning. Right?

Well, maybe not. How about a shot at the “other” bass? You know, the green ones with the black spots and huge mouths. A few years back, I was reading an online discussion between Ray Bondorew (Stripers and Streamers author) and my longtime friend, Armand Courchaine, of the Rhody Flyrodders. Ray was asking, “How many saltwater striped bass fishermen also fish for largemouth bass?” It may surprise some salt-only fly guys, but there are many fly-fishers who make the switch, or who are already part-time largemouth fans. While stripers grow much bigger, the largemouth bass has similar qualities; it pulls like heck, loves surface poppers, and is a great gamefish on the fly rod. Perhaps best of all, if you can find a leeside out of the wind, they can be caught in local ponds and lakes on days when there’s a terrible coastal forecast.

Getting to the bass doesn’t require a fancy bass boat. Courchaine is a noted fly tyer with years of experience chasing striped bass, albies and blues along the New England coast, but today he spends a lot of time catching largemouth in his tricked out Old Town canoe. With detachable pontoons, it’s super stable yet light in weight and very easy to launch. I’ve gone the kayak route with a 9-foot Ocean Kayak Frenzy that is easily wheeled or slid to the water’s edge. If I can park my truck near a pond, I can fish it. Other bass guys like to walk the shore or wade, like Capt. Ray Szulczewski of Tide-Runner charters in Cape May. He chases largemouth bass whenever wind, lack of bait, cold water or lack of fish slams the door on striped bass.

Capt. Ray starts his bass fishing soon after ice-out, relying on bead-head Wooly Buggers and Clousers to get down deep along the edges of drop-offs or near deep holes. He uses a sinking line in cool water and counts down before starting his retrieve. A few weeks back in mid-March, he and his buddy, Paul Kerlinger, decided that fishing was better than doing yardwork. At a nearby Cape May pond, they caught a mixed bag of bass and crappie, way before any striped bass were starting to sniff around the back country.

When the water warms, Ray switches to intermediate and floating lines, and uses flies that imitate baby bunker. “They resemble small sunfish and the bass love them.” Other favorite flies include surface gurglers. “Summer can be tough to fish if the water is really hot. The weeds in the lakes get thick and the bugs get bad. If I fish, it is usually late in the day near dark. I take bug spray and primarily use surface poppers.” Armand Courchaine admits, “I never grew up. I fished with my dad all through my youth and, today, I still get a thrill from the visual splash of a bass taking a surface popper.” He thinks fly rods with more relaxed actions are a lot more fun to fish and occasionally takes out a vintage cane or fiberglass rod for a trip down memory lane. “Some younger fly fishermen have never seen a cane rod. Can you imagine that?”

After spring, Courchaine will continue to fish through the summer, casting spun deer-hair poppers with rabbit fur tails that waggle like a snake. “I also use dragonfly and frog patterns, but you don’t see frogs moving around that much on ponds. Snakes do, and that’s why I like to use a rabbit strip tail. All bass look upward, so they see that motion and grab the fly. I use a 50-pound-test mono weed guard to avoid getting snagged around lily pads and in ponds with tall weeds.”

One of Armand’s biggest fly-rod-caught bass was a 24-inch, 8-pound fish. “I hooked a really big fish in a weed patch, but lost it while trying to land it. I made several more casts, and finally hooked another large bass that came to the canoe looking like a Christmas tree because it was so tangled in weeds. I landed that fish, but the one I lost was even bigger.”

Armand and Ray both like the fall, when the fish tend to congregate more and the catching can be excellent. There are fewer bugs and the fishing can be exceptional. Aside from the fun of catching fish, the quiet of a freshwater pond can be soothing. It’s one reason why Courchaine likes his canoe so much. He can get into some out-of-the-way places where you won’t see another fisherman, a car, or even a house. “Leave the horsepower behind. Paddling a canoe is quiet and you can sneak up on the fish without disturbing them.” Fly-tackle requirements are simple. Most bass guys use a 9-foot, 8-weight rod with a moderate action, which makes chucking poppers and surface bugs a bit easier. Some sweetwater bass fishermen like to go up one or two line weights to soften a stiff rod’s action, but also to allow a quick presentation with minimum false casting. At the end of the retrieve, pick up, shoot a few feet on the backcast, and shoot again on the forward cast; that’s it. If you like a moderate action rod, check out St. Croix’s Avid Series and Temple Fork Outfitter’s Pro II Series. Some bass guys like the new breed of short rods, and I do too, so I switch back and forth between my favorite G. Loomis ShortStix 7/8 and a Bass Pro Heat rated for an 8-weight line.

Casting distance is not essential. (Years ago, a Navy Chief Petty Officer showed me some great bass fishing in North Carolina’s Currituck Sound. We fished 8-1/2-foot rods, floating lines with 6-foot, 20-pound leaders and making 40-foot casts.) The trick is to noisily smack big cork poppers down on the water along the edge of the marsh grass to get a fish’s attention. If you don’t get whacked after several quick strips, lift and shoot to do it all over again. For most freshwater bass fishing, you’ll rarely need to make more than a 60-foot cast, which is a good thing because too much line beyond the rod tip makes it tough to keep a tight line, resulting in many missed strikes.

The retrieve can be all-important. “Keep the fly moving,” suggests Armand, “Slow down only if you see a wake coming. The biggest mistake you can make is to stop the popper. And, remember, bass always look up, so pop it, and they will come up to grab it.” When fishing subsurface, 6-inch twitches and a few longer strips will usually get the fish’s attention.

Although you’ll usually catch more bass below the surface, ninety percent of the fun is seeing the surface strike, so deer hair, foam or cork-body poppers are always good go-to pattern choices. Favored colors include yellow, green, black and purple; even in daylight, a white bug is less visible than a dark popper. Captain Ray also likes black, especially at night, and advises, “The darker the night, the better the fishing.” Armand’s favorite colors include orange for the deer-hair body and dark brown or black for the tail.

While many fly-fishers who target bass do so on windy days because the salty options are too tough to fish, Armand suggests spending time on ponds when there’s no wind and the surface is unruffled and smooth. “The best bass fishing is always when the ponds are calm and quiet, especially on a cloudy day.”