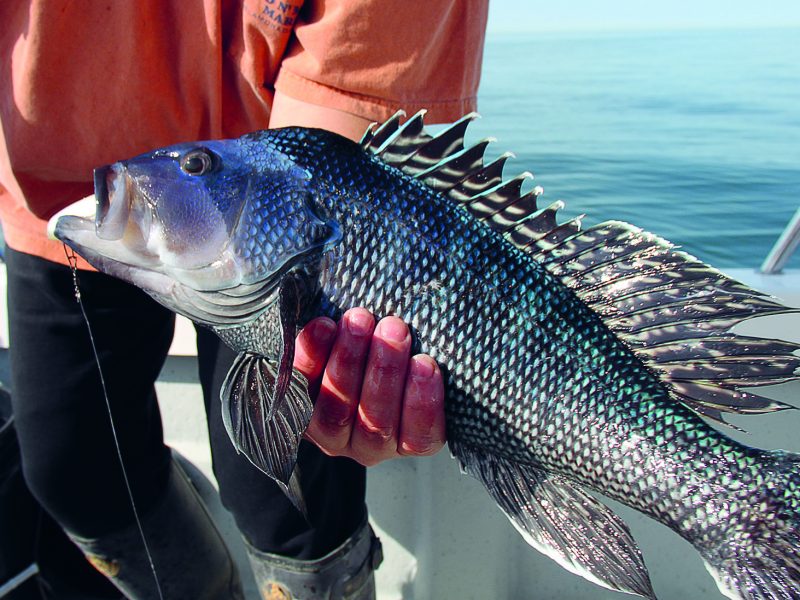 Black sea bass have moved northward over the past decade to the waters in the Gulf of Maine.

If one had to pick a finned poster child for how warming waters are altering our fisheries, it’s got to be the black sea bass. The center of distribution for this now ubiquitous bottom dweller has steadily marched northward over the past several decades, and the species, once a rarity north of Cape Cod, has become increasingly commonplace in Gulf of Maine waters off Massachusetts, New Hampshire, and Maine.

Whether they’re invading a lobster trap, snatching a seaworm on a flounder spreader bar, or slurping up a glob of clam meant for haddock, black sea bass have made their presence known. Both anglers and scientists are beginning to take notice.

With this shift in range comes a bunch of questions about how their newfound environment could change the biology of this popular recreational species. Scientists currently manage black sea bass from Cape Hatteras to Maine as a single stock divided into “sub-units” north and south of Hudson Canyon based on differing abundance levels and life-history traits. However, if the characteristics of fish in the newly colonized waters north of Cape Cod are markedly different from those further south, there may be a need to assess and manage these Gulf of Maine fish separately.

For Dr. Marissa McMahan, the recent bump in Gulf of Maine sea bass numbers is personal. “I come from a commercial fishing family in Maine, and when working on my dad’s lobster boat during the ‘ocean heat wave’ of 2012, we caught 30 or 40 in lobster traps. In his previous 40 years on the water, my dad had seen only about five of them,” she explains. “There was clearly a big change underway.”

McMahan, now Fisheries Division Director at the Manomet Center for Conservation Sciences, led the effort to investigate black sea bass biology in their newly expanded range as part of her Ph.D. research at Northeastern University. The Gulf of Maine, she explains, is very different from historical black sea bass waters south of Cape Cod in terms of habitat, species, and environmental conditions such as temperature.

“We were focused on seeing whether these conditions could mean new changes in the life-history traits of black sea bass that are important for effective management, such as growth rate, age at maturity, and diet,” she says. Her work represented the first effort to collect biological information on black sea bass in the Gulf of Maine.

With the help of commercial lobstermen, the Massachusetts Division of Marine Fisheries trap-and-trawl surveys, and recreational anglers, McMahan and her colleagues at Northeastern University and the Gulf of Maine Research Institute collected black sea bass from three areas: southern Massachusetts (south of Cape Cod, representing where black sea bass are traditionally found), the North Shore of Massachusetts, and mid-coast Maine. With about 300 sea bass from 6 to 20 inches in hand, the team looked for differences in a variety of biological characteristics based on both the region the fish came from and when in the year it was caught.

McMahan and her colleagues detected a handful of dramatic differences between sea bass from north and south of Cape Cod. One of the most pronounced was the shift in diet. “We found that fish collected in the Gulf of Maine ate almost entirely crustaceans—crabs, shrimp, and lobsters. But for fish in southern New England, higher-quality, fatty prey like fish and squid were a big part of the diet,” she says. What a fish eats has big implications for how it allocates energy to life processes like growth and reproduction.

Indeed, the research team found differences in growth rate and size at maturity between the regions, though the results weren’t what they expected. “We were surprised to find that growth rates for Gulf of Maine fish were actually higher than those in more southern waters,” McMahan explains. One would think that for a cold-blooded animal, growth would slow in the cool Gulf of Maine. However, the cooler waters may be precisely the reason for the faster growth rate, McMahan says.

“We think that maybe because the warm “growing” season is shorter in the Gulf of Maine, fish grow faster during that time to compensate.” This faster growth rate may explain why the researchers found that Gulf of Maine black sea bass matured at a younger age and larger size than those south of Cape Cod. Interestingly, across all samples (north and south of Cape Cod), the team estimated that sea bass were longer at a given age and matured at a larger size than what’s currently assumed in the black sea bass stock assessment.

Temperature isn’t the only possible explanation for a faster growth rate—competition, or lack thereof, may also play a role. “There are a lot more black sea bass in their traditional range than there are in the Gulf of Maine,” McMahan describes. “That means these northern fish have fewer competitors for food and space, and thus may be able to grow faster.” The fact that the traditional large-bodied predator in these waters—cod—is overfished may further enable sea bass to rapidly occupy what’s become a largely vacant ecosystem role. Together, these factors could explain why Gulf of Maine sea bass are able to grow quickly even with a “low quality” prey base of crustaceans.

As is often the case, this study, while offering some key insights into black sea bass biology in the Gulf of Maine, brings with it a whole host of new questions and challenges. The first is easy to describe but far harder to execute: better characterizing the abundance and distribution of black sea bass in their new range. A lot of the information is anecdotal—McMahan’s experience lobstering, for example—and traditional survey methods like trawls don’t capture structure-loving black sea bass very well. “We’ve been working with commercial lobstermen and collecting data from ventless trap surveys in Massachusetts and Maine to better capture the expansion,” McMahan notes. She and her colleagues are also looking into using environmental DNA, or eDNA, with which scientists can use samples of seawater to determine both the presence and the abundance of certain species like black sea bass.

McMahan is also in the process of conducting a genetics study with collaborators at Northeastern University to see if there are genetic differences in fish from up and down the coast, which could suggest that Gulf of Maine sea bass represent their own distinct stock.

Lastly, there’s a need for a tagging study. Further south, black sea bass migrate offshore in the winter months, but it’s not clear whether the fish up in the Gulf of Maine undertake the same types of movements, if they stay put, or even if they migrate south and out of the Gulf of Maine.

Together, these findings could help to determine whether Gulf of Maine black sea bass should be managed separately from fish south of Cape Cod. In the meantime, one thing is certain for northern New Englanders: black sea bass are here to stay.

What Happened to Weakfish?

Determining Where Bluefin Tuna Come From