Cod are amazing fish. Flatly put, it’s probably the most important fishery in American history without a competitor for the title even in sight. Of the historic American fisheries, none has brought more wealth or fish to market than cod. Much like the story of the bluefish, the cod’s tale is one of ups and downs. Unlike bluefish, the cod’s story is also one of freedom. 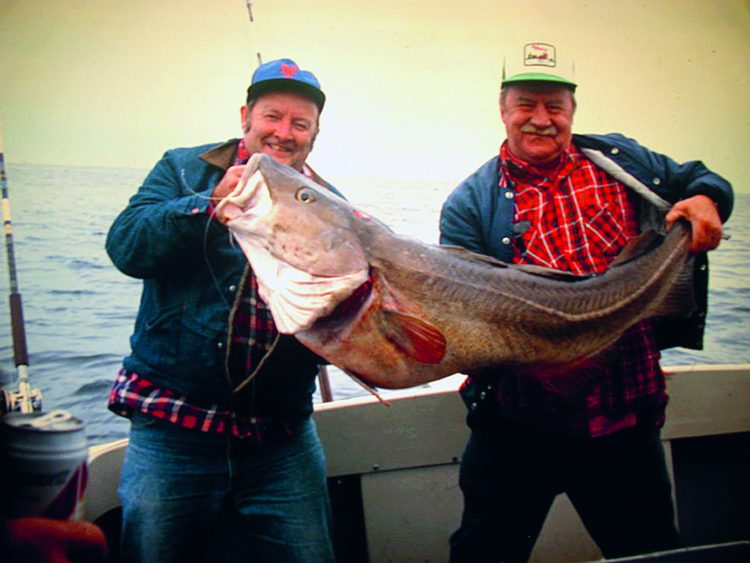 The fish we call cod (and “codkin”) are wide and diverse, the largest of which is, of course, the cod. This group includes Pacific and Atlantic cod, all species of hake, pollock, haddock and ling. Yes, Ol’ Yellow Lips makes it onto this most reverent list. The cod itself is split into different names for the different regions where it is fished, though the Atlantic Cod is still the species to which they all belong. Though the regional names are just that, they are representative of different populations of cod throughout the nearshore Atlantic. Such populations include Native Cod, caught dominantly around the red corals in our cold, deep-water reef systems, and Pasture Cod that roam the sandy bottoms off New Jersey.

For a long time, cod was fished off Europe, but the problem with this fishery was simple and two sided: for one, the fishery existed only in summer months. Second, the Spanish, Portuguese, and English had fished them out in the years leading up to the discovery of the New World. This is where we get to talking freedom.

As far back as 1602, the American Northeast has been recognized as the great seat of the cod fishery. After all, it was in 1602 that the Cape of St. James was renamed “Cape Cod.” Cod was important back then for several reasons. It was a firm, clean-tasting meat that took well to salt-based cures. It rehydrated exceedingly well, especially when compared to other fish. When preserved with salt, cod lasted for years. This was extremely important in the ages before refrigeration. There were also a great deal of observable religious holidays across much of Catholic Europe, days on which eating meat was forbidden. The call for a new supply of salt cod was easy to hear and the first real American entrepreneurs answered. John Adams once compared cod in New England to tobacco in Virginia.

The importance of cod as the first major economic export of the Americas is what opened the door to the revolution. Many of the first Americans who were independently wealthy of the British Crown were cod fishermen. By the 1640s, the American cod industry was booming, providing salted cod to markets abroad. Unlike the European cod industry, our cod fishery worked year-round. Cod can be bottom fished all year, with little lapse in catches. Unfortunately, our cod industry had also come to the point where it was nearly depleted.

The cod of old were bigger fish. There are numerous reports and photographs of cod weighing more than 150 pounds, with some pushing 175. Today, it’s rare to see fish larger than 30 pounds. What was originally an unsustainable cod fishery has now been devastated by what amounts to nearly four centuries of unregulated fishing. The inventions contributing to this collapse were the larger drag-netting vessels (which made fishing much safer) and the refrigerated ship. Drag-netting also dramatically increased bycatch as well as taking smaller fish that previously couldn’t get their mouths on the large hooks used in more traditional methods. Refrigerated vessels allowed fishermen to stay out longer and retain larger catches. It took until the 1990s for Canada to put a total moratorium on cod fishing in the Banks off Newfoundland. Americans have been reluctant to adopt a full moratorium because of the number of generational jobs that will be lost. A 20-year moratorium would likely be the end of American cod-fishing traditions.

Cod can grow very large. This 65.5-pound cod was captured in the mid-70s on Stellwagen Bank.
– Captain Rodger JarvisCod fishing was one of the first fisheries I ever got into. When I was a teenager, my father, brother and I rented a campsite in Southwest Harbor, Maine, on the same island that houses Acadia National Park. Every summer, we fished for mackerel, pollock, and cod using rental rods and cut bait. We usually did well enough to make a campfire fish soup. I suppose this is how most people get introduced to the cod fishery. Most recently, I feel the draw back to cod fishing in the winter.

With that said, cod and codkin give me something to go out for in the harsh winter months. The year-round fishery still holds up and is worth investigating, but only if you have the salt in you to stand the cold. There are captains from Rhode Island, Long Island, and even New Jersey who are running these increasingly popular winter trips. There’s something for everyone in winter cod fishing. For the fluke angler in me, it’s still bottom fishing. It requires a bit of finesse and I never really know what I’m into. For the striper angler in me, I know that I can get into some bigger fish, as some of the cod taken over the last few years have hit the 40-pound mark.

When it comes to fishing cod, I’m a man of simple means. I either fish chunks of meat on the bottom or I take a pink shine Berkley Gulp Grub and throw that on a white or red bucktail. I try to stick as close to the bottom as I can without dragging along structure. I don’t tend to move my bucktail very much when fishing cod.

I’ve seen fishermen have great success using diamond jigs for cod, fluttering them very close to the bottom with long, slow drags up and down. I always manage to donate my diamond jigs to the deep, but I know the technique works. 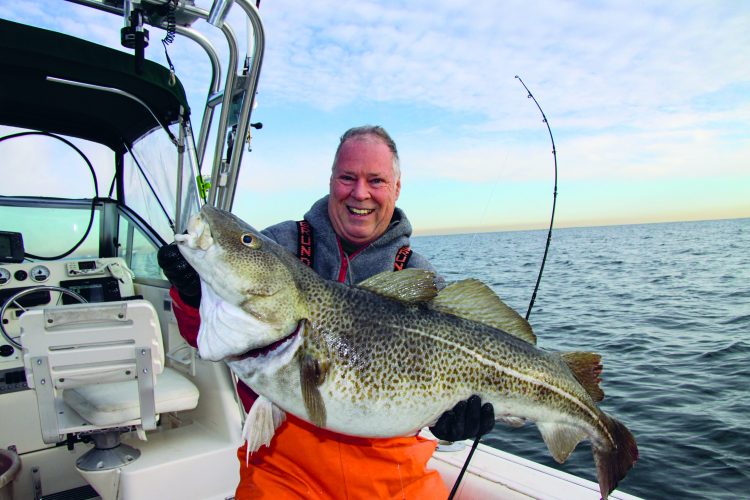 Cooking cod is a pleasure. Cod is one of the most versatile fish, with generous white flakes and delicate meat. Cod, as I mentioned, is excellent salted. It is also very good fresh, but when cooking cod, I recommend that it be lightly salted and then allowed to sit for a few hours in the fridge. This draws out some of the moisture and firms up the meat nicely. This technique is especially good for frying. Cod makes great fish and chips. Cod also stands up nicely in chowders, especially if you lightly smoke it before adding it to the soup. About the only thing I don’t do with cod is grill it.

Like a lot of us, I get stir-crazy in the winter. Though numerous fishing shows and expos give me a nice reprieve from that, they ultimately just make me want to fish more. The ocean calls to fishermen. Maybe there’s truth to the old “siren’s song,” some understanding of who we are that can’t be blocked out by the constant stream of distractions. This is the type of call that makes us do strange things, like clean and oil all our reels…again. Or, pack the plug bag for the spring even though the season doesn’t open for a month and fish won’t show up for another two. It’s that nagging feeling after buying a couple of plugs at a winter expo. There’s an answer to that, and it’s a satisfying part of our American heritage. This winter, we can answer the call of cod.
Recipe:
Skillet Cod with Roasted Root Vegetables

This article was originally published in November 2019.