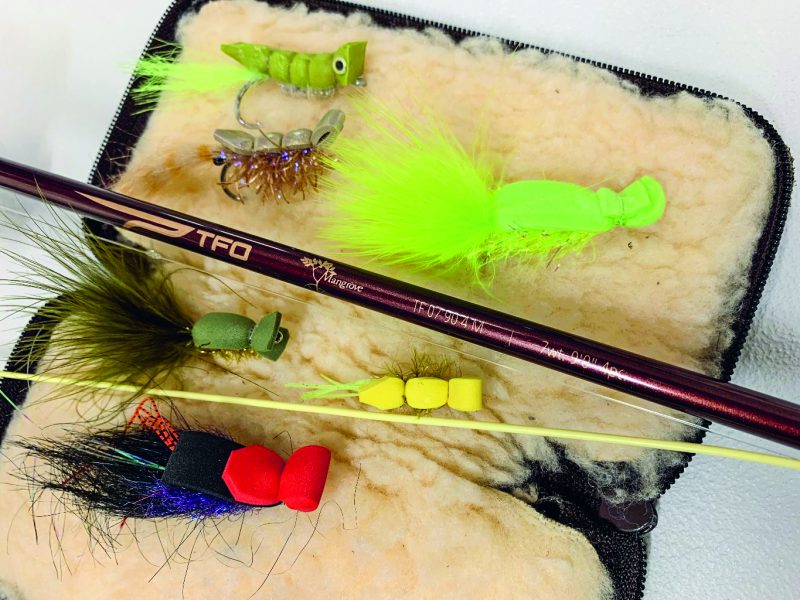 Jack Gartside was an interesting, innovative guy. Some called him quirky or a character, but it was always in a kind and reverent way. He marched to his own drummer, and his passing in 2009 pierced the hearts of the fly-fishing world. In over 50 years of fly-tying, he created many freshwater and saltwater patterns like his Pheasant Hopper and Corsair Minnows along with others like the BeastMaster and Soft Hackle Streamer that refined and improved patterns of other tyers. He was always searching for the perfect fly – seeking fly-tying answers was Jack’s passion. Perhaps his most unique fly pattern is the Gurgler, a foam creation that can be tied in numerous variations to catch everything from pond bluegills to coastal striped bass, and Everglades tarpon.

Jack said the Gurgler was born in 1988 on a trip to the Bahamas to catch jack crevalle, tarpon, and snook. He was so happy with the results that, with some modifications and fine-tuning, it quickly became his favorite topwater fly for striped bass, bluefish, and albies. It can be tied to look shrimpy to appeal to weakfish, or long and skinny like a sand eel, or short and plump like a baby bunker. A friend of mine fishes a Gurgler on a sinking line, letting the front lip work a seductive wiggle motion that schoolie striped bass find irresistible.

The Gurgler is light in weight so it casts pretty well, but it’s the visual eye candy of watching topwater strikes that makes the Gurgler so much fun to fish. Capt. Ray Szulczewski of Cape May sums it up very well, “I use Gurglers for the same reason we all use any surface fly—the excitement when the fish smashes it on the surface. We all live for that moment.” The Gurgler is an expert at providing those moments.

Foam sheets can be purchased at fly shops like Paul McCain’s River Bay Outfitters in Baldwin, New York, or from craft stores in thicknesses from 0.5 mm to 6 mm. Paul says, “For my Gurglers, I use 2 mm foam, with a single layer for the body, and then apply Super Glue to attach a small extra strip at the lip for more support. The Gurgler is one of my favorite flies because it is easy to tie, casts well, and catches fish.”

Experiment with the body thickness because if you tie with large hooks, choose a thicker foam for better flotation, while small hooks can be easily floated with thin foam.

➤How to Tie a Gurgler Fly

There are numerous variations of the Gurgler in magazine articles, books, and online. Only two things remain constant, though, no matter how you tie it: the foam shell is buoyant and keeps the fly floating, and the purpose of the lip is to create a surface disturbance.

Rick Ferrin ties a standard, traditional Gurgler (with a 2/0 Mustad 34011 or 34007 hook) at about three inches long because that size represents the bay anchovies bass feed on almost all summer in Long Island’s Great South Bay. “If I need to imitate a sand eel, I use long saddle hackles for the tail instead of bucktail. About two years ago, I started using Cascade Crest Dragon Tails to imitate a sand worm swimming near the surface, but so far, my success has been inconsistent. I like the action, though. The tail really comes alive.”

For schoolie stripers in salt ponds, creeks and marshes, and when pond fishing for largemouth bass, my preference is to substitute marabou for the tail instead of bucktail, which Gartside actually did in the very first examples he tied 30 or so years ago.

Ray Szulczewski ties his Steroid Gurgler a bit larger than the traditional pattern because he wants to cause more commotion that will draw fish to strike. “I use much thicker foam and make the front much wider so it pushes a lot of water. I also make the front more concave so it pops. With the bigger profile, I also insert a glass rattle into a braided body so it makes more noise to attract fish,” says Ray. “The only problem with the larger size is it doesn’t cast as well, but it does catch fish.”

Although a feature of the standard Gurgler is that it is not a noisy fly, which is a good thing when bass scatter and flee if the fly is too loud or aggressive, but there are times when a little more sound can help. Capt. Steve Huff fishes Florida’s renowned Everglades and created the Hot Lips, a Gurgler variation that looks much like the standard one; however, on close examination, Steve adds a small lip protruding below the hook eye to complement the standard lip above the eye. With a snappy pull, it can be popped loudly to get the attention of a snook or tarpon. If the strips are gentle twitches, it splashes discreetly, much like a standard Gurgler. It’s the best of both worlds, and the Hot Lips works great on striped bass too.

Another variation from the southland is International Game Fish Association’s Dr. Marty Arostegui. His Unsinkable Frog traces its heritage to the Gurgler, but it folds the foam back over itself to create a large, rounded head that floats high, pushes a lot of water, and sports a big eye for added attraction. Although Marty’s Unsinkable Frog is usually tied with a 3/0 hook, variations of the fold-back style for the foam body are tied under various names by numerous tyers who use size 4, 2 or 1 hooks to make wonderful panfish surface gurglers, sliders, and poppers.

When it comes to color, it is always important but sticking to the basics is the best course to follow. At one time, I thought sparkle-back foam was a great idea, but I eventually laughed at myself and realized the glitter was all on the top where a bass couldn’t see it. Ditto for the beautiful dots I painted. Today, I stick with the basic favorites of white, black, yellow, pale blue, and chartreuse. I add color enhancements by painting the mouth red, or by using Estaz or EP Minnow Head Brush Fibers instead of palmered hackles for the body. I sometimes use a Sharpie to add color along the sides of the foam shell.


How to Fish a Gurgler Fly

By varying the retrieve tempo and strip length, the Gurgler imitates a struggling baitfish, a pond amphibian, a frog, a mouse, or a flipping peanut bunker.

Even at rest, the marabou fibers are tickled by the water and provide constant motion. After a few short strips, I let the Gurgler sit for a few moments, then twitch, pause again, then follow up with several short strips and another long pause. This stop-and-go retrieve is very effective in quiet, nighttime situations when striped bass are feeding along a bulkhead, over a grass flat, or along a marsh sedge; and ditto for freshwater bass along the edges of lily pads, or a drop-off. This past year, I also began tying some very small Gurglers on size 6 hooks for panfish. Bluegills love them, especially when I add wiggly rubber legs.

Large or small, a Gurgler’s dainty weight is not as affected by water-resistance as big flat face poppers or large underwater flies. It can be a tough chore to “feel” the fly during the retrieve, especially at night when visibility is not so hot, but Szulczewski offers proven advice, “You have to learn how your fly moves in full daylight because, after dark, you have to do it by feel. Practice, and learn how to strip the fly to get the desired action even if you can’t see it.”

“After dark, it is sometimes easier to get hook-ups if you wait a moment until you feel weight on the fly line before setting the hook,” says Szulczewski. “Through the years, I’ve seen too many fish lost as an angler sees the hit and sets the hook when he sees the fish attacking, only to pull the fly away before the fish can get it down. Another key point is to always keep in contact with your fly by pointing the rod toward it so when the fish does strike and you feel it; make sure there is no slack in the line preventing you from strip-setting.”

Tackle choices depend on the size Gurgler you intend to cast. At his booth at the Somerset Fly Show many years ago, Jack told me he preferred a 9-weight rod but cautioned that he tied most of his Gurglers on 3/0 hooks, which were fairly large in size and somewhat wind-resistant while casting. In quieter waters, either fresh or salt, with less wind to contend with and less bulk to hinder the cast, he preferred a 7-weight and used Gurglers tied on size 1/0 hooks. I’ve been tying tiny Gurglers on size 4 or 6 Owner AKI Light hooks for largemouth bass and bluegills, and they’re great fun on a 5-weight. As an aside, the AKI hooks have a nice wide gap and get more hook-ups, but the caveat is the structure you’re fishing. If there’s too much salad and lily pads, you may need to go up to an 8-weight to help you pull a bass through the green junk.

One word of caution when unhooking your next striped bass (or even a panfish) is this: Don’t grab the foam body to twist the hook free. Doing so will probably ruin the Gurgler. Using forceps or thin-nose fishing pliers to grab the hook at the bend is a better choice to protect the fly.