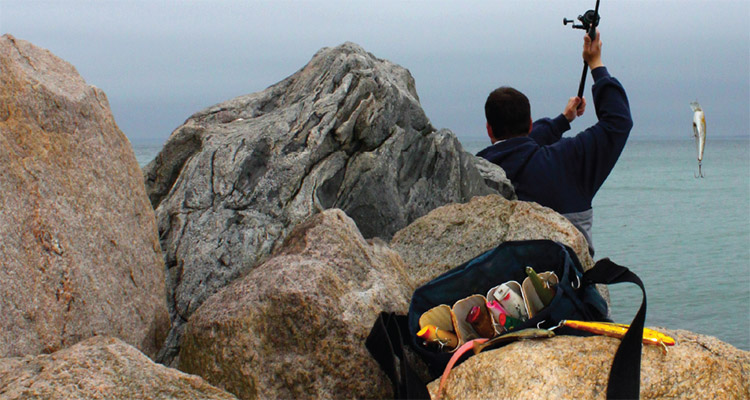 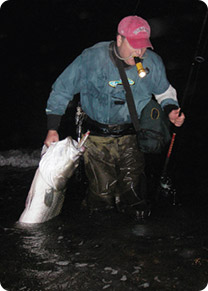 Nowhere is as famous for its fall-run fishing as Montauk at the eastern tip of Long Island. While big blitzes draw thousands of anglers to “The End” each season, it’s the anglers who can fool fish between the blitzes that have the most success. Surfcasting Guide Bill Wetzel has built a reputation for finding fish in the Long Island surf throughout the season, and guides clients to big bass each fall while working lures along Montauk’s rocky shores. His plug bag, he says, doesn’t change too much throughout the year, but he has a few staples that produce big time for him in the fall.

A large variety of baitfish round the point at Montauk on their fall migration, and according to Wetzel, no lure imitates more of these baitfish than the Super Strike Zig Zag.

“There is always bait around that is about the size of the Super Strike darter,” Wetzel says, referencing the snapper blues, juvenile weakfish and mullet that draw stripers into Montauk’s Surf. “I use gold and yellow, and blue in the morning.”

Unlike many anglers, Wetzel uses darters at night and during the day. Most fishermen pack away the darters after sunrise, not using them again until dark. “I don’t understand why more guys don’t use darters during the day,” Wetzel says. “With a faster retrieve and sharper twitches of the rod tip, it becomes an underwater spook.”

Wetzel occasionally modifies his Super Strike Zig Zags to make them swim deeper by replacing the standard 3/0 belly hook with either a 4/0 or 5/0 treble. This will force the lure to dig more and reach deeper water. 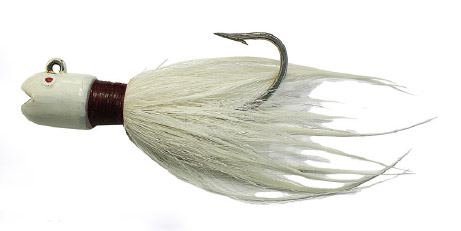 “I constantly throw buck tails,” said Wetzel. Most often, a 11/2-ounce jig is the perfect size for Monatuk, but Wetzel may go as light as a 1/2-ounce or as heavy as 3 depending on the conditions.

“If it’s flat calm, I use a half-ounce bucktail with no pork rind, but during a nor’easter, I’ll use a two- or even three-ounce jig.”

Unless Doc sees surface activity, his first pick for the South Shore is the bucktail jig. He works it through the trough next to the beach where stripers hunt migrating fall baitfish. Doc varies the weight of his bucktail depending on the wind and water conditions.

“If I see bunker, mullet or herring, or some kind of surface commotion, I use a surface lure,” Doc says. With big baitfish around, topwater lures help Doc get the attention of hungry fall-run bass.

Doc also uses the 2 3/4- and 3 1/2-ounce Gibbs Pencil Poppers and the Tactical Anglers SeaPencil. “With the SeaPencil,” Doc says, “I get a nice hybrid action. It splashes, works side to side and even walks.”

“Though many fishermen think darters are only good in rips, I catch a lot of bass on them in the surf on the South Shore,” Doc explains. Darters, along with bottle plugs, are some of Doc’s chief fish catchers on the South Shore’s sandy beaches after dark during the fall run. “Darters do especially well when there is big bait around and the bass are roaming, not tighly concentrated in a school.”

Bottle plugs also get the call during the daytime for Doc, both the Gibbs Casting Swimmer and the Super Strike Little Neck Swimmer.

The 7-inch, 3-ounce and the 6 3/8-inch, 2 3/8-ounce Super Strike Super “N” Fish are one of Doc’s South Shore favorites, and contrary to popular belief about needlefish being a nighttime-only lure, Doc does a lot of his catching with the Super “N” Fish during the day.

“When the sand eels are abundant, the Super Strike needlefish in white, green or chartreuse is a great lure.”

The northern half of the New Jersey coast consists of long sandy beaches broken up by jetties. Starting with the mullet, a number of baitfish species move along these beaches and jetties in the fall, bringing stripers and blues into the surf and sometimes right into the wash. 2011 Striper Cup Angler of the Year, Chris Buchta, keeps close tabs on baitfish movements to determine just what lures he should pack along when bass and bait start moving along the Jersey beaches.

Though Buchta’s fall run lure selection depends on which baitfish is most prevalent, Chris’ top producer tends to be the Daiwa Salt Pro Minnow. “The SP Minnow is my fish-finder,” says Buchta. “Sometimes the fish won’t hit anything until you put on an SP Minnow.”

Buchta says the SP Minnow looks like a lot of the smaller bait that moves into the New Jersey surf in the fall, like spearing and sand eels.

Perhaps the best lure when sand eels are thick is the Ava A27. Buchta uses this diamond jig for its close resemblance to sand eels and its ability to cast long and reach fish holding well off the beach.

To cover the entire water column, Buchta likes the Storm Wildeye Shad. It doesn’t hurt that the lure is a dead ringer for a peanut bunker. The bait can be fished from just under the surface to along the bottom. It’s also deadly with a lift-and-drop retrieve.

Angler: Don Brown
Home Waters: Atlantic and Cape May County, New JerseyBehind the barrier islands that form the South Jersey shore are big bays teeming with all manners of baitfish. Come fall, as these baitfish move toward the inlets, stripers and blues wait in ambush on the ocean side. And waiting to ambush the stripers, are South Jersey surfcasters like Don Brown of Captain Andy’s Fishing Center in Margate. As opposed to some of the fishermen up north, Don finds that smaller plugs produce best in South Jersey.

Bomber Long A 15A

The 41/2-inch version of the Bomber Long A, upgraded with Owner treble hooks and
split rings, catches a ton of fish for Brown each fall. “Sometimes I load them up with bbs, and sometimes I leave them as is, but the erratic action of the lure looks just like a mullet.” Brown adds bbs to the plugs to increase their casting distance. For color, Brown’s first choice is yellow. “My second choice is yellow,” Brown jokes, “and my third choice is yellow.” Brown has found that yellow plugs catch the eye of South Jersey stripers but when the mullet are thick he uses silver-and-black Bombers.

Brown also has a lot of success with walk-the-dog lures like the Zara Spook and Rebel Jumpin’ Minnow. These baits are a great imitation of surface-swimming mullet. Walk-the-dog baits work best in relatively calm water. Too much wind or surf will make it difficult to create the zig-zagging action that makes these lures so successful. On calm days, stripers will appear out of nowhere to smash a surface-walking plug.

The Smack-It Popper is one of the most productive lures for South Jersey stripers. Brown fishes them in the surf in the early morning. The cupped mouth of the popper gets a fish’s attention even in a rolling surf.

To fish the bottom, Brownn uses white bucktail jigs and 4-inch Storm Wildeye Shads in the mullet or bunker color.