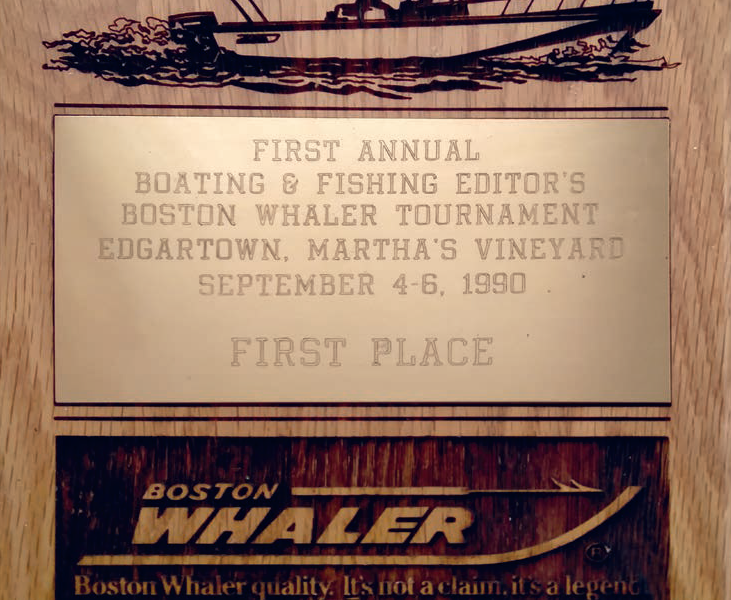 After running five days back-to-back from Padanaram to Cuttyhunk, the Elizabeth Islands, and Vineyard Sound, I had four days off and looked forward to enjoying them. My wife and I were going to celebrate my Labor Day birthday somewhere in the mountains, away from the boat and ocean…or so I thought.

I had regretfully declined an invitation I usually would have jumped at – the opportunity to run two of Boston Whaler’s newest offerings, a 31 twin diesel sportfisherman and a tricked-out 27 center console with a pair of big outboards bolted to her transom. Paul Foster of Boston Whaler had told me about the big center console designed by Peter Van Lanker, founder of Black Watch Yachts, and I was envious. This was one of their first offerings of those popular fishing packages, but it was my birthday, and I had promised my wife we’d get away for a few days.

Foster promised we’d get together at some time in the near future to give the boats a look and perhaps write a profile for their advertising brochures. Then, a few days later, he called and said he was in a bind and needed a favor. He had tried his best but could not find a captain to work along with Captain Porky Francis to run the boats. I explained that to my wife, and she gave me her blessing.

I had previously met Whaler president Bill Ryan while I was cod fishing out of Scituate, Massachusetts, where he kept a large sportfisherman in a slip across the way. He came by one day and saw me offloading fish totes onto a hand truck, struggling to climb the steep and slippery wooden ramp to my waiting truck. He disclosed that the harbormaster had told him in confidence about my success fishing fairly close to shore and claimed he had not had any luck finding cod because of all the gill nets and lobster trawl gear set over the prime bottom. I informed him that my editor and I were working on a new book, titled “Fishable Wrecks and Rockpiles,” and I was using a hang log with Loran-C numbers from a former New Bedford skipper who had traversed these waters for over 40 years.

That conversation led to a Sunday afternoon trip on his boat, which was equipped with the best in electronics available at that time. Big boats drift too fast and are difficult to fish from, and after a few unproductive drifts over a hang number, a friend Bill had brought along claimed there were no fish there. My friend Tim Coleman looked up and smiled, casually pointing to my son, Peter, on the starboard side, whose rod was bent and tight to a feisty market cod.

I gaffed that cod and two more in the same class that we extracted from the sticky wreck, which had a section of green dragger net hung up on it. That net claimed more than a few of our host’s rigs, so we relocated to the bones of an old wooden barge less than a mile away that was sitting in just over 100 feet of water. We picked away at a few smaller cod, a pollock or two, and a couple of mackerel before heading out to a rocky piece some divers had told us were the remains of an old wooden lobster boat. Years of growth had accumulated and spread from the huge engine block to the shaft and running gear, creating a haven for bait, predatory cod, and pollock. We put together a good catch of cod and celebrated over a great meal at the harborside restaurant, where we made plans to visit a few more wrecks the next time out.

The next August was when Whaler called and invited me to be a part of their First Annual Fishing and Boating Editors Fishing Contest on Martha’s Vineyard. Paul Foster had asked me for my shirt and shoe size, which was common practice for events; however, I was overwhelmed when I entered my hotel room and discovered two duffel bags chockful of swag in the form of clothing and fishing tackle. Whaler certainly knew how to say thank you.

As a boy, I dreamed of walking into the local tackle shop and picking out everything I needed or wanted without having to pay for it. That weekend, my dream came true. Captain Francis had the keys for Larry’s Tackle Shop, where we walked the aisles, selected everything we needed for that day, and logged it into a ledger that Whaler settled with owner Ruthie Meyers at the end of the contest. It was like having the keys to the candy store. Unaware of the arrangement, I had brought along my tube-and-worm rods and numerous other tackle items, just in case.

Our first day out, I ran the 27 and had five editors along with Peter Van Lanker and his wife aboard the tricked-out CC. I followed the capable native guide out to Nantucket, where we began trolling for blues in the rips around Great Point. Wire-line outfits are not entry-level tackle for most anyone, so my forgiving leadline outfits were much appreciated. We began trolling along edges and were immediately into blues in the 10-pound class. After several bent rod, drag-pulling passes, my deckmates were more than satisfied with the action.

As I was mopping up the bloody cockpit, Porky pulled alongside to inform me that he was heading around Point Rip to look for stripers, and he’d hail me on the VHF if he found them. I had recently fished the roiling waters of Tuckernuck and Muskegut Channel, which watermen know as a hairy place to fish, but when the bait is there, the bass are usually in residence along those shallow rips.

As luck would have it (and it really was a combination of luck and opportunity), we enjoyed some very fast action. With a fish box full of fish bled and iced, we went looking for the big Whaler. When we found it, the crew was tired, bloody, and smiling because everywhere Porky had deployed the lines, there were hordes of hungry bluefish eager to chomp down on their bucktails. The action was so consistent that our delicious lunches were hardly touched until we were steaming back to our home base and the comfort of our luxurious rooms in Edgartown’s Harbor View Hotel, where we had some time to rest and recover. After a group cocktail, we were transported to the Homeport Restaurant in Menemsha Bight to put the frosting on an already fabulous day. Looking back, if it was at all possible, I would be delighted to take that now-31-year-old 27CC and run it for the remainder of my fishing career. I fondly recall running clients’ boats from Padanaram, New Bedford, and Fairhaven harbors to Cuttyhunk and the Vineyard and laying over in Menemsha after a long day of fishing, principally to dine at the Homeport. On those trips, we waited in line with such luminaries as opera star Beverly Sills and the likes of America’s newsman, Walter Cronkite, who carried the traditional boat bags containing their wine and adult beverages. Menemsha is a dry port, so guests were required to bring their own booze.

Captain Porky was a regular, so when he ordered Homeport’s famous seafood platter, the waitress asked if he wanted his usual two servings, to which he responded in the affirmative. I was also a fan of their seafood platters (and of Porky’s appetite), and I watched him dig into his second plate before I was even halfway through my own generous serving.

The next day, we swapped boats and ran offshore. We were blessed with great weather, but the offshore waters were devoid of life, and we had to settle for green bonito and schools of false albacore. After everyone aboard had hauled their share of fish alongside, I offered a rod to the vice president of Cummings, who was staying with the 31 sportfisherman, where he was monitoring his engines on both days while nattily dressed in a sport jacket. I idled down to release a fish when he climbed out of the engine compartment. I told him he was up next, an offer which he politely declined. “I’m not one of your guests, I’m a vendor just happy to be in your good company,” he said. I told him that unless he took the next fish, we would rack the rods, head home, and call it a day, a mantra my cheering fellow anglers took up with vigor. The starboard rod went down, and I walked him over and made a few suggestions. His initial hesitancy was replaced with a beaming enthusiasm as he battled the acrobatic albacore boatside. I believe it was his first fish, so I told him he had just caught Ruthie Meyers her dinner. I immediately bled and iced her supper because Ruthie was a grand island lady and one of the few people I knew who appreciated the taste of that species.

The banquet and awards ceremony were held later that evening at the Homeport. We ordered directly from the menu, with baked stuffed lobster a team favorite. I was seated at a table with Saltwater Sportsman editor, Whit Griswold, and my new best friend, the VP from Cummings, when Whit called my attention to the podium. Someone called my name, and I had no understanding as to why. I later learned that the group from Whaler, with a consensus of participants, awarded their first-place votes to me, not for catching any fish, because I did not catch a single one. It was suggested that it was because of how I treated all the participants, making certain that each one was comfortable, had an opportunity to take the helm, ask questions, and catch as many fish as they could handle. I have rarely been more surprised. Along with a distinctive plaque, I was given a Krieger Tide watch, which is an impressive timepiece. When I had changed my plans and agreed to participate, I had no idea what an incredible weekend was in store.

For the record, the tourney was never about competition, it was about assembling a group of like-minded individuals in a casual, nautical setting to introduce their boats and allow nature to take its course. Everyone associated with it considered it a huge success, but that was not the end of the story.

The band on that watch was too large for my skinny wrist and, with Christmas on the horizon and very little savings in my Christmas Club account, I accepted an offer from a charter skipper who had a yearning to own that unique timepiece. For years, the watch gave him a great deal of pleasure. It eventually went to Davy Jones’ locker on the wrist of that amiable fisherman, though that is a story for another column.