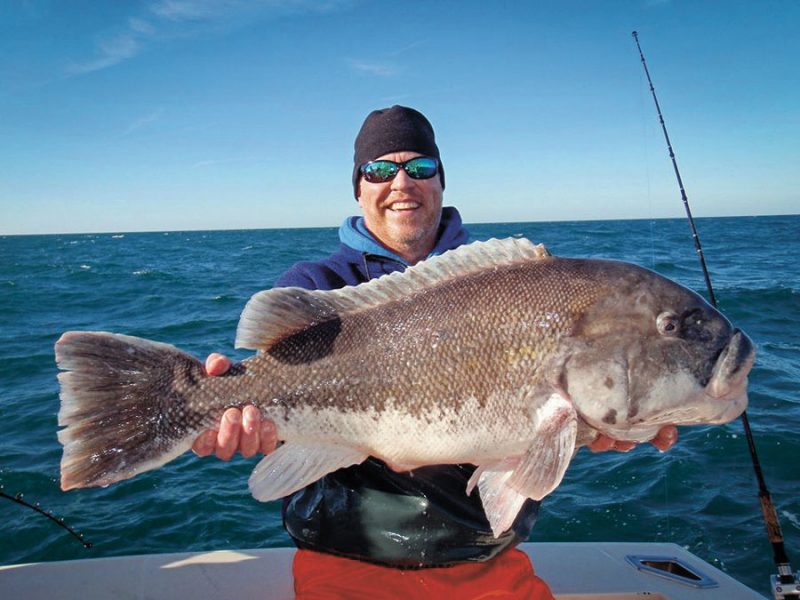 It’s no secret that tautog are to reefs, wrecks, and bridge pilings what ‘tog fishing is to snags: they’re inseparable. This tendency to aggregate around structure, combined with their slow growth rate, relatively low reproductive output, and willingness to bite a hooked crab, makes tautog particularly vulnerable to overfishing and slow to recover from such declines. As with any other species, effective tautog management starts with understanding population structure, which helps inform at what spatial scale—local, regional, or coastwide—management actions should occur.

In 2017, the Atlantic States Marine Fisheries Commission (ASMFC) switched from managing tautog as a single coastwide stock to dividing it into four regions to be assessed and managed independently: Massachusetts-Rhode Island; Long Island Sound; New Jersey-New York Bight; and Delaware-Maryland-Virginia. The ASMFC made this shift based on tagging data showing limited north-south movement and differences in fishery characteristics for each of these four regions. The ASMFC’s Tautog Management Board, however, was interested in using other scientific approaches to ensure this regional approach was appropriate.

Working with recreational anglers and state fisheries scientists from Cape Cod to Cape Hatteras, the research team collected fin-clip samples from a total of 789 tautog for their genetic work. For Dr. Hamish Small, an associate research scientist at VIMS and lead author of the study, such “sampling” often meant joining anglers on winter runs to Virginia’s inshore and offshore wrecks in search of outsized whitechins. “It was great to involve recreational anglers where we could, and without their help collecting samples, specifically from Virginia and North Carolina, we wouldn’t have a coastwide study,” he explained. “These are the people who know the fishery and have a vested interest in making sure the best available science is used to support management actions.”

For the actual analysis, the team identified specific repeat patterns in segments of tautog DNA—known as microsatellites—and examined how those patterns changed across fish sampled from different locations.
Their findings were striking. The team identified no genetic differences in fish sampled from south of Cape Cod to Cape Hatteras, suggesting that there is some level of population connectivity. However, tautog from north of Cape Cod were found to be genetically distinct, meaning that fish in the Gulf of Maine represent a separate population.

So, what do these results mean? One part is easy. “Cape Cod is clearly a significant barrier to dispersal, and tautog in the Gulf of Maine represent a different evolutionary unit than those to the south,” said Jingwei Song, a PhD student in Dr. Jan McDowell’s lab at VIMS and a co-author of the study. These results certainly suggest that tautog in the Gulf of Maine should be managed separately.

The story south of Cape Cod is a bit messier, as a lack of genetic population structure doesn’t necessarily mean that the ‘tog population is one well-mixed stock all along the coast that should be managed as a single unit. Even if there were several largely distinct tautog populations from south of Cape Cod to Cape Hatteras, it takes only a few fish moving between those populations and spawning to maintain the lack of genetic difference that the researchers found. “There’s enough gene flow, or interbreeding, of tautog along the coast that we aren’t seeing genetic differences,” explained McDowell, a research associate professor at VIMS and study co-author. “But it doesn’t mean that there’s enough connectivity that if you fish out one area it will be repopulated with fish from elsewhere.”

In other words, genetics is just one tool managers should use to inform the spatial scale of their efforts, along with other approaches like tagging, fishing pressure, and differences in tautog life-history characteristics among regions. “While our findings suggest that the ASMFC’s Massachusetts-Rhode Island management unit should be separated into regions north and south of Cape Cod, they don’t necessarily imply that the other regional management units are inappropriate,” McDowell added.

As for what’s contributing to the lack of genetic variation, there are two possible explanations: adult fish migrations and larval dispersal. While both of these are plausible, given that tagging studies have shown limited ‘tog movements, the drifting of larvae on ocean currents is most likely the culprit. This is especially true in the Mid-Atlantic, where tautog are notorious homebodies and suitable habitat is pretty patchy compared to the continuous rocky bottom of the northeast. “If tautog are dispersing a lot in the larval phase, separate groups of fish can live on wrecks or reefs miles away from each other but still maintain genetic connectivity,” Small explained. “In Virginia, for example, fish from the Chesapeake Bay Bridge Tunnel and wrecks 30 to 50 miles offshore were genetically similar, despite there being very limited suitable habitat in between.” To the north, meanwhile, Cape Cod likely represents a barrier to larval dispersal, effectively sealing that population off from the rest.

Having identified Cape Cod as a major population boundary, the research team is excited about expanding their sampling in the Gulf of Maine to determine whether any further genetic structure exists. However, with the exception of Cape Cod Bay, they have had difficulty obtaining samples. “We’d definitely be interested in partnering with any anglers in Massachusetts, New Hampshire, or Maine who regularly encounter tautog and would be willing to collect fin clips,” Small said. If this sounds like you, send him an email at hamish@vims.edu.