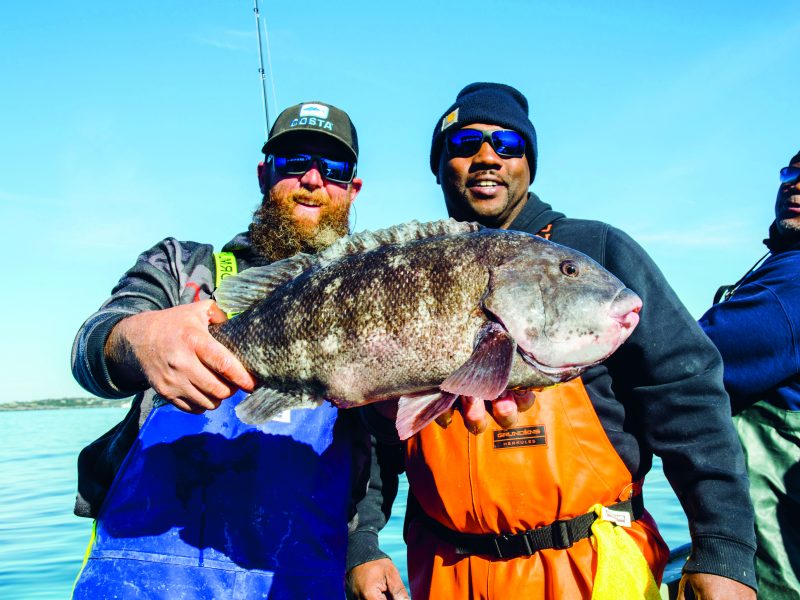 Last year, I did a miniature tautog fishing tour of the Northeast, fishing with several captains across three states from October to January. In addition to bringing home enough fillets to keep my family in tog chowder through the winter, I brought back a few tautog fishing tips that I’m confident will help me raise my personal best for the second season in a row.

Tautog fishing had begun to pick up a few weeks before, but something about anchoring up and dropping green crabs on a 70-degree day in September just felt wrong. When we loaded Anthony DeiCicchi’s 26-foot Blackwatch with crabs, coolers, and hot coffee on the first cold morning in October, it felt much more appropriate.

We departed Eel River on the south side of Falmouth, Massachusetts, and pointed the bow west to the Elizabeth Islands. Along the rocky island chain, blackfish were hugging the shoreline so the question wasn’t whether we’d catch, but whether we’d brought enough green crabs to weather an onslaught of throwbacks, scup, and out-of-season sea bass. Anthony stopped at one of his waypoints along Naushon Island, the largest island in the Elizabeth chain. Just about anywhere in the 15- to 25-foot depths looked like ideal tautog habitat, with shell beds, eelgrass, and bowling-ball to sedan-sized boulders. After extensive trial and error (and too many anchor pulls in previous seasons), he felt this area held the best keeper-to-throwback ratio.

The machine-gun taps of tiny fish began immediately after my bait hit the bottom. I swung the rod on empty water and retrieved an empty hook. This went on for 30 minutes, feeding the small bait-stealers while waiting for the bigger tog to bite. I asked Anthony if we should consider a move, and he shook his head, explaining that all the attention our baits were drawing from smaller fish would eventually attract some big ones— “building the bite,” as he put it. Not too long after that, he swung the first keeper tautog into the boat. Once on the scene, the bigger blackfish seemed to muscle through the smaller fish to get at the crabs, and we filled our limit in short order.

Tip: When the water’s warm early in the tog season, bring more bait than you think you’ll need in order to outlast the bait-stealers. Also, don’t give up on an area too quickly, even if all the fish are shorts. The smaller fish feeding will eventually attract the interest of larger blackfish.

It was early November, the heart of the tog season off Newport, Rhode Island, when my friend, Captain Rob Taylor, told me he had an extra spot on an open boat trip. It’s difficult to imagine a more perfect part of the coast for blackfish than Newport. Besides its endless rocky shelves, reefs, and boulder-strewn bottom, it’s situated at the mouth of Narragansett Bay. Tog gather in this fertile estuary in the late spring and early summer to spawn, and many remain there and in the shallow waters around Newport until dropping water temperatures concentrate the fish on progressively deeper structure throughout the fall.

Even though Newport might be one of the best places to break double-digits on tautog, the tackle aboard Rob’s boat was surprisingly light. Spinning setups outnumbered conventionals, and instead of 40- to 50-pound braid to wrench blackfish off the bottom, most of the spinning reels were spooled with 30-pound test. However, don’t mistake these tackle selections as simply making more sport of tog fishing. Thinner-diameter braided lines used in conjunction with spinning tackle means fishermen can use lighter tautog jigs and make better presentations that fool more fish.

The first drop wasn’t showing Rob what he wanted to see, but after he “made a little wiggle,” positioning his boat, the Reel EZ, over a different piece of the structure, we were on our way to a boat limit. Any question I had about the ability of the tackle to conquer big tog was answered within the first hour when Gary Yearwood put an 11-pounder on deck.

I’ve caught plenty of just-keeper tautog using my own spinning setup from my kayak, but this was the first time I tested it on 6-pound-plus fish. The lighter gear was a pleasure to fish, yet was capable of putting a surprising amount of heat on the tog.

The key, Rob explained, was to never let up pressure on the fish. As soon as the hook connected, I was to keep cranking until the blackfish was out of the danger zone–meaning no pumping and reeling until the tautog was safely away from the structure.

A tight drag was essential, which put extra pressure on the connections. A long shock leader was another requirement to keep the thin-diameter and easily cut braided line away from the rocks.

The six anglers aboard used a variety of tog jigs. The only thing in common was that all of them laid flat on the bottom, enticingly serving the crab to the tog. Rob recommended using the lightest jig possible, usually ½- to 1½-ounce jigs.

Jig color made no difference on our trip. Brown, orange, and green all caught evenly, and Rob kept pace with a jig that had been chewed on by so many fish that all the paint was gone, exposing the bare lead. More important than the color were the halved green crabs tipping the jigs, hooked in such a way that they stood up off the bottom.

Late in the day, we moved to deeper water, where I bumped up my jig size to help hold bottom. Even in 50 feet of water, 1-1/2 ounces was plenty thanks to the lack of water resistance from the thin-diameter braid. There, after a couple more “run-of-the-mill” 5-pounders, I hooked a fish that refused to come to the surface. I kept the fish out of the rocks, and then a couple minutes later, Rob slipped the net under my biggest-ever tautog.

Tip: Sturdy but lightweight spinning rods, equipped with 20- to 30-pound-test line have plenty of backbone for beating big tog while allowing the use of light tog jigs that perfectly present crab baits. Using the lightest possible jigs that still hold bottom will get more bites and better hook-ups, improving the odds of catching big tautog.

I raised the hammer and stopped. I’d known for years that hermit crabs were the “secret” weapon of winter tog fishermen, but I hadn’t considered that getting one out of the shell required multiple blows from a ballpeen hammer. Thoughts of my daughter’s beloved pet hermit crab purchased from the Ocean City boardwalk earlier that summer stayed my hand. Just then, someone hooked a blackfish, and, forgetting my misgivings, I swung the hammer.

We’d been grinding away on different parts of Sea Girt Reef, swinging and missing on scratchy JoeBaggs Togzilla Lay Flat Jig bites and catching a couple shorts when Captain Eric Kerber produced a small bucket of hermit crabs. These are the only bait I’ve ever fished that came with a warning. “As soon as you drop it down there, the fish won’t want anything else,” warned Kerber.

New York Bight blackfish see far more hooks than their northern and southern counterparts. During our Christmas-week trip, those fish had gotten a month and a half of heavy fishing pressure from dozens of headboats and hundreds of private boats from New Jersey and Long Island. With that much competition, tog fishermen look for an edge, and the tender vittles of a de-shelled hermit crab can provide it.

The caveat is that if one fisherman drops down a hermit, everyone else needs to switch too – or watch him catch. At least that’s the going wisdom. Fishermen seem to believe it enough that, at one point, a boat anchored nearby to fish. And after hearing the regular thwacks of our shell-cracking hammer, radioed Kerber to check if we were using hermits. Upon confirmation, he pulled the anchor and left for a different part of the reef.

Kerber instructed us to thread a hermit crab onto the hook, starting at the soft tail and coming out at the head, similar to rigging a soft plastic. Hits were immediate, but unlike the green or white-legger crabs, one hit was all it took to clean a hermit right off the hook. Bites started coming more frequently, and keepers started filling the cooler soon after the hermits hit bottom. We returned to the dock a few fish shy of a boat limit on a day when the radio chatter centered around the lack of keepers.

Tip: Late in the season, pack hermit crabs, but use them only after it’s clear that white-leggers and green crabs aren’t getting the job done. Hermit crabs catch tautog all season long, but because of their soft bodies, they are best used in colder waters after bait-stealers like black sea bass, porgies (scup), and bergalls have moved out.

A jig that lies flat on the bottom with an exposed hook is ideal.

How to Get Hermit Crabs

The land-based hermit crabs with their colorful shells sold at boardwalk gift shops would probably catch tautog, but the ones used for bait are a water-dwelling species, the flat-clawed hermit crab.

Bait shops occasionally carry them, but you’ll probably need to call and request them in advance. Flat-clawed hermit crabs are a bycatch of commercial whelk fishermen. 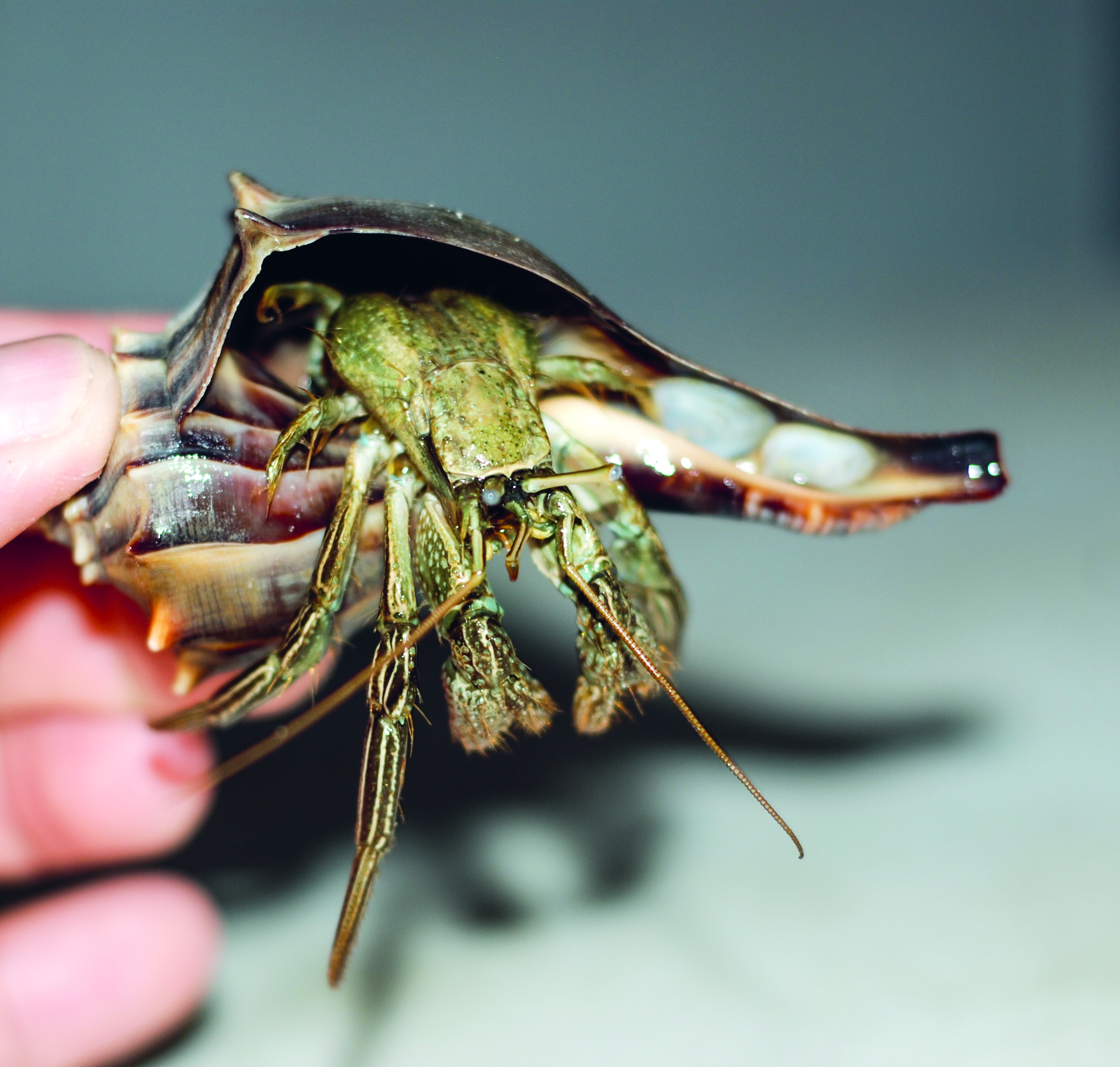