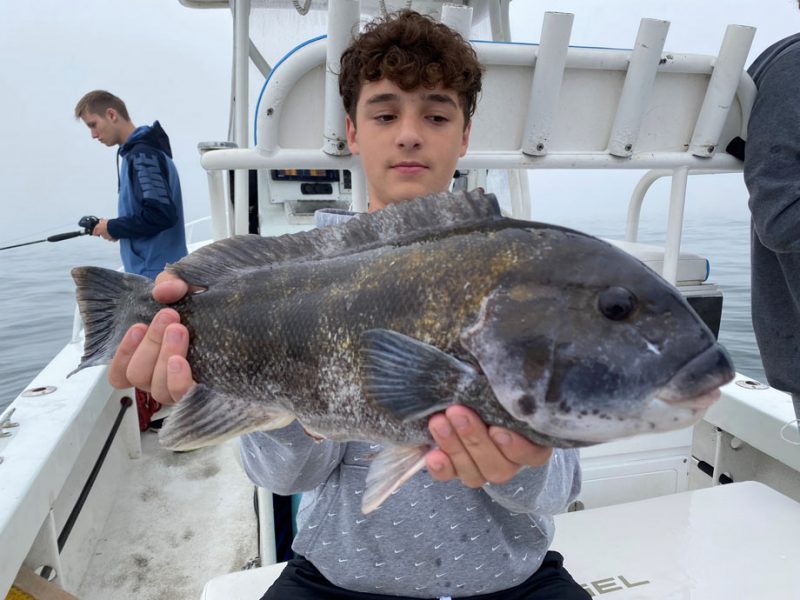 Juvenile tautog are shades of olive green with blotches or spots on the lateral sides of their body. As they age, tautog slowly become darker in color, which is why they’re often called ‘blackfish’ in the mid-Atlantic region.  Adult ‘tog’ have dark scales, ranging from chocolate gray, deep dusky, to dull black.

Where can I find tautog?

Tautog are a bottom-feeding saltwater fish, found in the Atlantic Ocean from Nova Scotia to Georgia. They most commonly live in the waters between Cape Cod and the Chesapeake Bay, in depths ranging from 10 to 150 feet.

What do tautog eat?

Even though tautog are bottom fish, they’re opportunistic daytime sight feeders, with an appetite for mussels and crustaceans (shrimp, lobster, crab, clams, scallops, and isopods).

How big do tautog grow to?

Tautog are a slow-growing fish, reaching lengths up to 3-feet, and weights of 20-pounds or larger. Since they’re relatively easy to catch and grow slowly, they’re prone to overfishing.

Can you catch tautog at night?

Fishermen and women in the northeast catch tautog during the day because they’re inactive and dormant at night. Tautog are stationary at night, hugging close to rock piles, reefs, and wrecks in the dark.

Do tautog have teeth?

How do you pronounce tautog?

The correct way to pronounce tautog is “taw-tog”, but they’re often called tog, and many people in the mid-Atlantic refer to them as blackfish.

Although most people consider tautog an ‘ugly’ fish, they’re sweet in flavor, yielding firm, mild, and white fillets. Tog do not have a distinct ‘fishy’ odor and are not oily in comparison to sardines, mackerel, and pelagic fish. They’re considered good eating, with some people referring to tog as the ‘poor man’s lobster’ of the sea, and drawing similar taste comparisons to red snapper.

What is the world record tautog?

The current world record tautog stands at 28-pounds and 13-ounces. It was reeled in by Kenneth Westerfeld in Jan. of 2015 off the coast of Ocean City, Md.

Where do tautog spawn?

Tautog spawning happens at inshore and nearshore waters, in the mouths of estuaries, and offshore on wrecks and reefs.

What is the scientific name for tautog?

The scientific name for tog is ‘Tautog onitis’.

How old is my tautog?

In comparison to other saltwater fish, tautog are a slow-growing fish. It’s possible to determine the relative age of a tautog based on the length of the fish. Age research estimates in Virginia and Rhode Island show tautog can live up to 34 years. Use the tautog age chart below to determine how old your fish is.

Article: Tautog Tips from the Pros