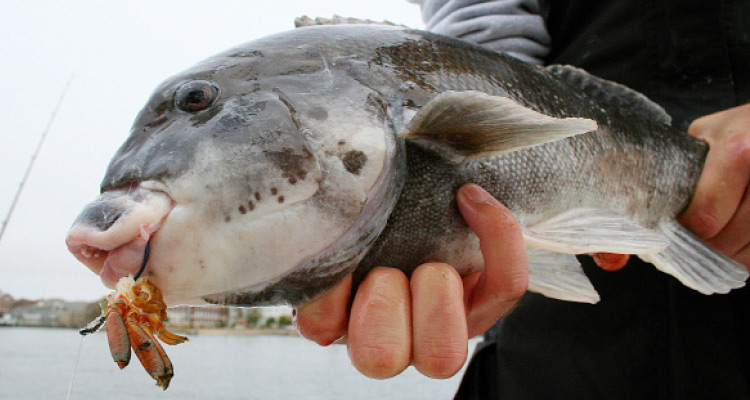 While tog are equal opportunity eaters, sometimes, catching the biggest blackfish on the wreck requires choosing the right crab.

The gnarly teeth of Tautoga onitis are designed for crushing crabs and other hard-shelled invertebrates that live on rock piles and wrecks in Northeast coastal waters. While tog are equal opportunity eaters, sometimes, catching the biggest blackfish on the wreck requires choosing the right crab. Here is a list of the best crabs from tog bait, how to get them, and where and when to use them.

The most popular tog bait is the European green crab. These crabs were introduced to Northeast waters through the ballast water of vessels several decades ago, and have since set up permanent residence along rocky coastlines of the western Atlantic.

Green crabs are readily available at bait and tackle shops during tog season, and a day’s worth of baits isn’t too expensive. Depending on the size of the crab, you can use green crabs whole, or halved.

The Asian shore crab has striped legs that make it easily distinguishable from the green crab. They don’t grow much larger than the size of a quarter, making them excellent baits when used whole.

Although very effective blackfish baits, Asian shore crabs cannot be bought at bait shops and must be caught on your own. Due to the small size of these crabs and their tendency to live strictly in the intertidal zone, they are nearly impossible to trap with commercially available crab traps. The most effective means of acquiring a supply of Asian shore crabs is by flipping over rocks at low tide and catching them by hand.

Since Asian shore crabs live along rocky shorelines and jetties, they are a very effective bait for backwater, jetty, and bridge fishing for tog. They are less effective farther offshore and in deeper water.

Rock and Jonah crabs, both called “white-leggers” in tog fishing circles are larger than the green and Asian shore crab, and live offshore around deeper rockpiles and wrecks, making deep-water tog much more lively to encounter them.

White-leggers, depending on their size, can be used whole or in pieces. Fishermen targeting trophy tog often use white-legger crabs, as they tend to be more effective than green crabs, at least on deeper wrecks.

Some tackle shops and headboats sell white-legger crabs, but they tend to be more expensive than green crabs. They are a common bycatch in lobster pots, and can sometimes be acquired by talking to commercial lobstermen.

Another crab that must be caught on your own is the mole crab. These gray crabs burrow into sandy beaches and can be easily dug up. They are most effective fishing around jetties and back bays.

Fiddlers are easily distinguished from other crabs by their one large claw. They are commonly seen in marshy backwaters, and are very skittish, fleeing for their burrows at the first sign of dangler.

They must be caught on your own, but are excellent baits for shore, bay, and jetty fishing for blackfish. Catching them can be done by digging them out of their holes.
Given their small size, fiddler crabs are used whole.

Some fishermen believe that hermit crabs are the very best big blackfish bait. The soft meat of the exposed hermit is irresistible to blackfish, and just about every other bottom-dwelling species.

They are available at a few tackle shops, but are expensive, sometimes costing a dollar apiece. Therefore, fishermen tend to use them on deeper wrecks, where there are less small bait-stealers. Hermit crabs are another common bycatch in lobster pots.

To hook hermit crabs, a fisherman must first remove it from its shell, which is best accomplished by smashing the shell by hitting the flat spot with a hammer. Place the hook through the hard part of the crab.