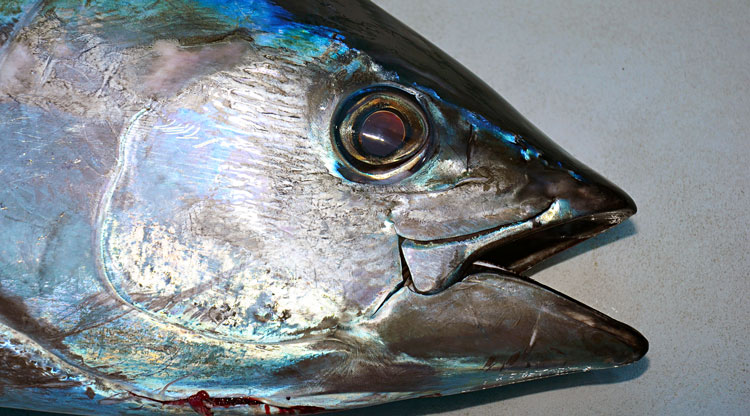 Bigeye tuna are one of the most sought-after gamefish in the Northeast Canyons. Rare and explosively powerful, anyone who has been fortunate enough to battle one of these magnificent beasts knows they can put a serious hurt on the angler. They often show up in “wolf packs,” wreaking havoc in the spread. When the “eyeballs” come calling, the bite is unmistakable and unforgettable. The water erupts with bomb-like explosions. Often these 300-pound monsters take a bait and go fully airborne. Just the thought of it happening gets the heart beating a little faster, as does the call over the radio from a captain getting wolf-packed: “EYEBALL! EYEBALL! EYEBALL!”

Last summer, we experienced one of the best bigeye bites in more than a decade. To give you an idea of exactly how good the fishing was, there were almost 30 bigeye tuna weighed in during the two-day Tri-State Canyon Shootout tournament based out of Block Island, with most of the bigeye taken from Block Canyon. On a trip I made in early August on the Force Majeur to Oceanographer Canyon, there were four boats fishing in the area, and all four caught bigeye. In fact, on the first three trips I made in August we boated four, at least one on each trip, while hooking and losing others. And, we were not the only ones. The fish ranged from Hudson Canyon to Oceanographer Canyon, with the largest concentrations being found at Fishtails and the eastern canyons, like Oceanographer, Welker and Hydrographer. Fish were found largely near the tips of the canyons and over structure on the northwest sides of temperature breaks.

Bigeye tuna, Thunnus obesus, known as Mebachi in Japan, is one of the most desirable of all the tuna species. It is generally higher in fat content than yellowfin tuna, and considered superior sashimi, rivaled only by its larger bluefin cousin. Bigeye are reported to live up to 12 years and reach a maximum length of about 98 inches, and a maximum weight in excess of 400 pounds. The current all-tackle world record is 392 pounds.

Bigeye spend a majority of their day at depths greater than 250 feet, often diving as deep as 1,500 to 1,600 feet in search of forage. This is in contrast to the yellowfin tuna, which spends over 75 percent of its time less than 250 feet from the surface.

Trolling a mixed spread in the canyons and along the edge of the shelf will catch the occasional bigeye, but there are a few ways you to improve your odds of catching one.

I heard of one bigeye that was caught on the flats during the 2013 offshore season, but the vast majority are caught from the 100-fathom curve out. They often hunt physical structure where baitfish congregate, including seamounts, canyon walls and high-flyers. In fact, we caught two bigeye off high-flyers this season, but both were also off the edge of the shelf over known bottom structure.

Most bigeye are caught just before dark or at first light. It is not known whether this is because their sensitive eyes better tolerate the dimmer conditions or if when squid and other bait begin moving closer to the surface at those times. Several successful fishermen even troll in the dark, and many have caught multiple bigeye tuna well after sundown. For anglers interested in hunting swordfish at night, they will have to choose which species they want to catch more.

On days when the yellowfin and longfin bite is good on the flats, consider moving out a bit to the edge an hour before sunset to take a shot at a bigeye.

Many of the top captains will tell you that logging your catches can make all the difference. While fishing the Mulberry Canyon with Captain John Galvin in August, we hit bigeye on the exact spot he had caught them a year or two earlier. I have also caught bigeye on consecutive trips on the exact same numbers west of West Atlantis Canyon.

Porpoises, birds and fish-oil slicks can all help you to locate the bait. Look hard—it can make all the difference! On a trip earlier this season to Oceanographer, every bigeye was caught in a half-acre school of feeding porpoises.

There are many different spreads that can be used successfully when targeting bigeye tuna. A general rule is that the spread should be tighter to the boat than the standard daytime-trolling pattern. Speed should be 6 to 8 knots so the lures are swimming in an enticing way. 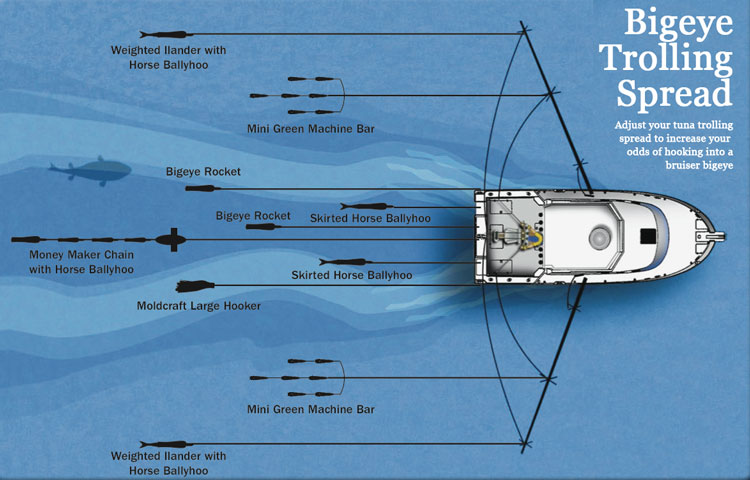 Many different lures can catch bigeye, and a variety of patterns can be successful. Short and stocky lures in the 8- to 10-inch range are productive. Dark colors stand out better in dim conditions. Meat is always good, and plenty of it—ballyhoo should be stepped up to select and horse sizes. My favorite lure of all is the Braid Bigeye Rocket. With the skirt trimmed, placing the lure back or off a corner rod has yielded an incredible amount of bigeye. I don’t know exactly what it is about this simple lure, but it draws them in. On three consecutive trips this year, we caught bigeye on this one lure. On one trip, a buddy boat caught three using the exact same lure. Other good choices include Moldcraft Hookers, weighted Green Machines, large jets, Joe Shutes, or other weighted lures that aren’t pushed out of the way by the substantial wake of a charging bigeye. Spreader bars on short-riggers also work well.

My go-to bigeye spread has mini Green Machine bars on the left and right short-riggers and, positioned 6 to 8 feet behind the bars, weighted Ilanders or Joe Shutes lures (rigged with select ballyhoo) off the long riggers,. Off the left corner is a purple/black Bigeye Rocket and off the right corner is a black/orange Moldcraft Senior Hooker. In tight to the transom are two skirted ballyhoo. A lone Bigeye Rocket is fished short off the center rigger and a daisy chain consisting of a bird and junior Ilanders rigged with select ballyhoo is set way back.

Captain John Galvin, a proven tournament fisherman who has caught more than his share of bigeye tuna, uses this spread: Two Moldcraft Squid daisy chains in tight, Green Machine bar on left short-rigger and Money Maker chain with ballyhoo on right short-rigger. Both bar and chain are run high off the rigger. Long-riggers are both Canyon Gear Hoo Machines with horse ballyhoo. Flat lines are Hairball orange/purple skirts with horse ballyhoo in tight. The center rigger is rigged with two Carlson birds with Ilanders/horse ballyhoo trailers. He trolls these at about 6 knots.

I hope that this excellent bigeye bite continues in the future, and that this info helps bring you into the world of the Thunnus obesus!