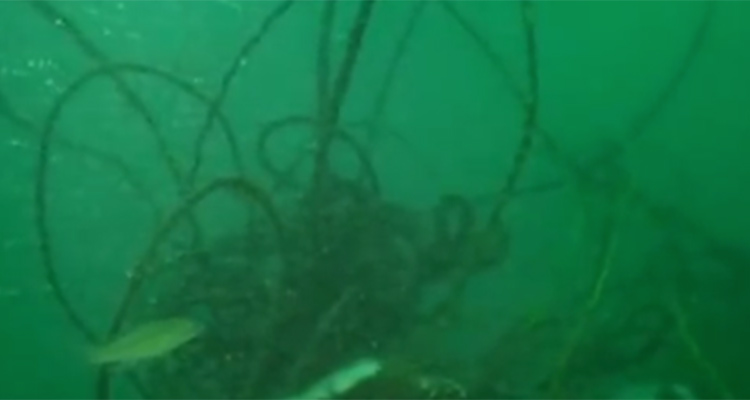 Pictured above: Tangles of ropes and commercial gear can snag fishing lines and anchors.

During their summer vacation, a family saved up for a half-day charter to fish New Jersey’s reefs. The kids were excited and the hour long trip to the fishing spot didn’t seem to take any time at all. The captain dropped anchor and lines went in the water. And that’s where the fun stopped. These anglers spent the next two hours untangling hooks and tackle from the commercial pots, traps, and lines covering the reef. The boat even lost its anchor on fouled gear.

Unfortunately, this scenario has happened all too frequently for NJ anglers.

Several years ago, New Jersey invested recreational angler dollars to construct a network of artificial reefs. Unfortunately, commercial fishermen moved in and blanketed these reefs with pots and traps that snag lines. Between the gear and lines on the bottom and the markers on the surface, some of these reefs have become unfishable.

Now, after a nine-year struggle, there is an opportunity to limit 13 of these reefs to hook and line and spear fishing – the types of fishing each reef was designed for – by designating them a Special Management Zone (SMZ). The Mid Atlantic Fisheries Management Council (MAFMC) is soliciting public opinion on the proposed SMZ designations and they need to hear from NJ anglers like you.

Like public parks, these reefs were built to benefit as many people as possible. If the SMZ designations are passed, commercial fishermen face minimal to no losses in revenue and recreational fishermen get their reefs back.

Send a message to MAFMC today. Comments are due this month so don’t delay.