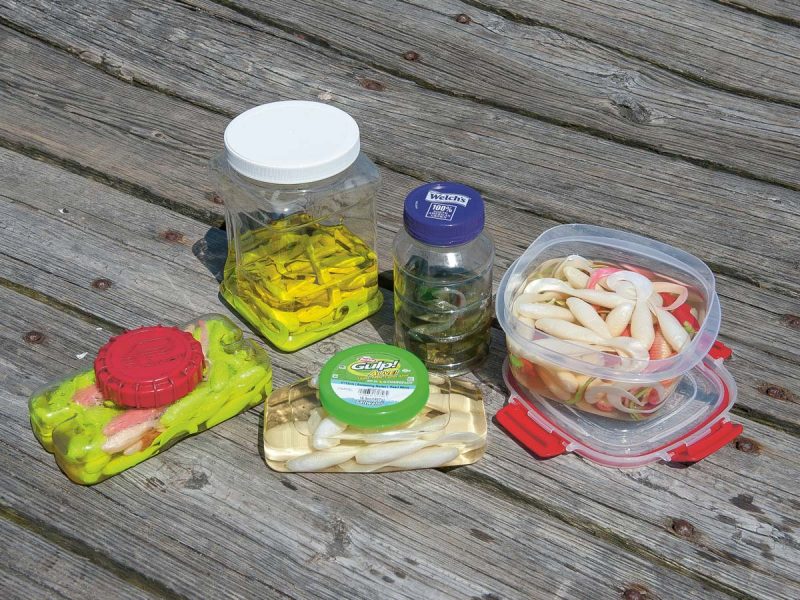 In 2003, John Prochnow and Dr. Keith Jones unveiled Berkley Gulp to the world. Their well-guarded, secret marinades were engineered from extensive lab and field tests, designed specifically for innovative, water-based resin baits. The Gulp offerings must be stored in their liquid attractant, and the baits benefit from an occasional “recharge” in this solution while fishing. While Prochnow and Jones solved the problem for fishermen unable to find quality live or frozen bait, it’s been up to anglers to discover how to best store these game-changing lures.

Some fishermen simply leave their Gulp in the containers they come in. The Gulp Alive tubs come in pint and half-pint sizes and do a fair job, although some fishermen who bought the Gulp Alive early on may remember the leakage issues that early tubs had.

Berkley Associate Product Manager Aaron Wavra specializes in soft bait, dough and attractants at the Spirit Lake, Iowa, hub of the company, and was keen to tell me about the improvements Berkley has made to the containers that come straight from production. “Berkley became aware of the leakage issues with the old jars and tubs, so we put forth an effort to eliminate the problem,” Wavra said. “On the old containers, the seals became ‘hindered’ and wouldn’t seal perfectly. Now, after lab testing, there is tremendous improvement.”

Improvement or not, I always take an extra second to make certain I line up the threads on the lid and the container perfectly. Some of my leaks in the past came from carelessly twisting on the lid, which caused a slow drip if I turned the unit upside down.

One way to help prevent leaks is to make an incision in the protective plastic wrap over the container rather than remove it entirely. This limits the loss of the Gulp formula when the container is rolling around the deck or held upside down, while still allowing me to extract the baits.

The Liqua Bait bottle has a heavy-duty lid supported by an O-ring seal and does reasonably well keeping the juice in and outside contaminants out. The bottle is 7.25 inches by 3.75 inches by 3.25 inches high, and the O-ring is extremely important to these or any other bait lockers. When an angler begins to observe wear and tear or warping in the O-ring, it’s time to start considering a replacement container.

The downside to these containers is the small opening that can make it difficult to extract baits. Plano provides a pair of plastic tweezers with each bottle, but these are clumsy to use and easily lost.

Containers made specifically for airtight storage work great for Gulp products. Rubbermaid makes a host of containers that can lock in Gulp and its juice. Tupperware is also a popular option, but perhaps the most popular container among fishermen is the Lock and Lock Airtight Storage Container. The large opening makes it easy to select a bait, and the heavy-duty lid is simple to open and securely close. It’s important to keep the lid clear of dirt and grime to keep the seal intact.

After a thorough cleaning, large pickle and pretzel jars are great for storing volumes of Gulp formula and baits. These containers aren’t as strong and can lead to cracking if the jar is tossed around the boat. Anglers who use these are advised to fill the container only halfway so it does not become top-heavy and fall over on a pitching boat.