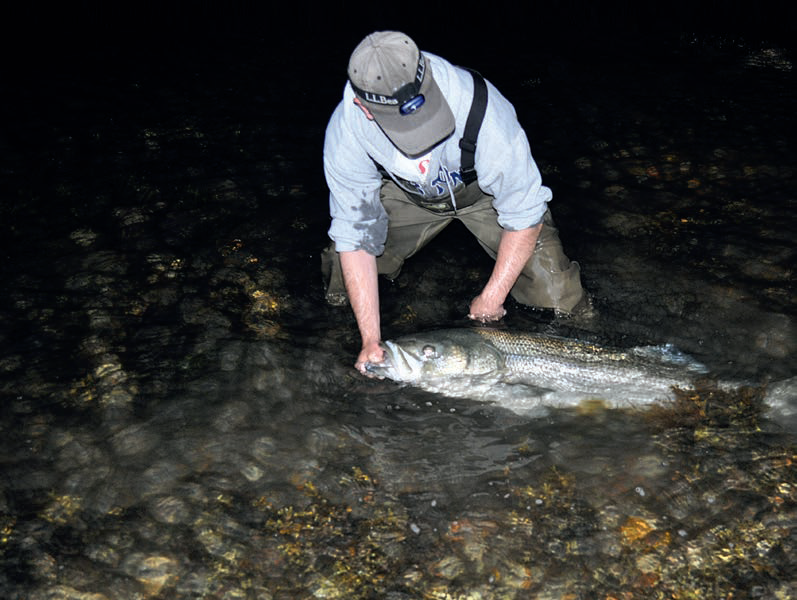 This big striper fell to a bottle-darter swung through the rip off the tip of a rocky point.

I couldn’t have asked for a better layout than I had at my favorite inlet in 2005. A series of winter storms dug out and exposed jetties that had been covered by beach replenishment projects for years. The mouth of the inlet itself had a series of sandbars and points that allowed surfcasters to wade further out than usual, and the inlet rips, formed by an undulating bottom, were almost within casting range. Most years, the rips were squarely in the middle of the inlet, well beyond even the longest caster’s reach. Frustratingly, during an outgoing tide, they formed standing waves as the undulating bot[1]tom contour provided striped bass with easy ambush points.

The first night I fished the inlet that June, I wore waders and stepped out as far as I dared into the outgoing tide. I started with bucktail jigs, but my casts fell quite short of the structure. I switched to darters, and though they out-casted the jigs, they too landed in the calmer water inside the rips. I switched again to bottle plugs, and put everything I had into the cast. Finally, I was at least grazing the turbulent water with my retrieves. On my third cast with the bottle, I felt a solid thump on my second turn of the reel handle, but I missed the fish. The next cast, once again I had another solid hit within a couple cranks of the handle. I hooked up to the fish briefly but dropped it. As I continued to put everything I had into the casts, my arms were growing more and more tired, and before long, my casts with bottle plugs were falling short as well.

I fished the next night, starting with the bottle plug, but I had the same results. Even on the casts that reached the rips, my plug was out of the productive water within two or three cranks. Defeated, I started to walk away, ready to write off the spot as a boat-only location.

I hugged the shoreline and spotted a sandbar uncovered by the falling tide, maybe 50 yards inside the inlet from the rips. The bar extended beyond where I was able to wade, but had the rips been right in front of me, I would have easily reached them. However, they were at a 45-degree angle, down-current of the bar, and out of casting range by about 20 yards. I figured I could cast the plug straight ahead and let out line to allow it to float into the rips before beginning my retrieve.

I later learned that this technique had been widely used at the Rhode Island breachways for decades, but since it was new to me, I was feeling quite clever as I fed line into the current after casting the bottle plug straight out from the tip of the sandbar. I counted to 10, figuring that would be enough time for the plug to reach the rips, and put the line onto the roller. The current was plenty strong to give the plug action, so I kept the reeling to a minimum, and left the plug to swing down and across the turbulent water. When the rod tip stopped pulsing, it indicated the plug had swung out of the rips, so I reeled it in and cast again. This time, as the plug was beginning to sweep, a fish smashed it and found the hooks. The bass bulled down-current, ripping line until it moved into an eddy and swam right at me. I caught up, and after a little more give and take, I had a 42-inch striper on the sand.