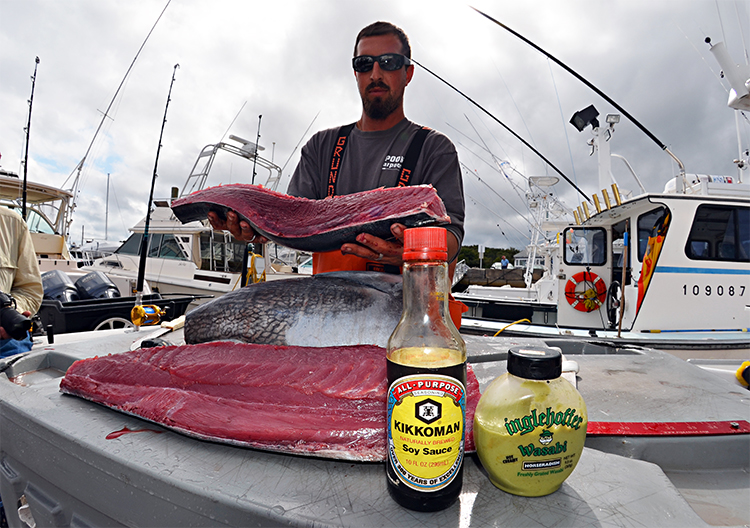 I learned to eat and love raw fish in 1963, when I was a 19 year old stationed in Yokohama, Japan. Upon returning from my two-year tour, I recounted tales of my overseas gustatory campaigns. My friends and family responded to what had been of so much delight to me with a singular reaction – astonished revulsion.

Back then, I could not possibly have imagined the popularity that sushi would attain in today’s American culinary lexicon, nor could I ever have predicted that bottles of soy sauce and wasabi would become standard gear on fishing boats chasing after tuna.

In Japan, I was stationed on a small base called Kami Seya, located about 14 miles from the port city of Yokohama. My job involved intercepting Russian naval communications for the Naval Security Group. With me, I brought an unchecked gastronomic curiosity, the result of an upbringing that stressed an enchanted appreciation for all things ethnic and culinary. (I remember being encouraged to order the whale steak at a Scandinavian restaurant on Route 1 in Dedham. Yeah, it was liverish and tough but tastier than the seal flipper I eat at the homes of my Newfoundland friends when I’m up there salmon fishing.)

While most of the guys preferred eating burgers and other “geedunk” at the base exchange or downtown, I actively sought out sushi, sashimi, yakitori, soba and donburi. (Although after satisfying my hunger, I would certainly join the other guys.) After receiving my Petty Officer status along with its overnight privileges, I got an apartment downtown and lived an almost entirely Japanese life. And that entailed a diet of raw fish, which in Japan is not a specialty food but is instead as common as burgers and dogs on America’s streets – and also less expensive. In those days, there were 360 yen to the dollar, and each dish of sushi cost around 30 yen. An “oki,” a one-liter bottle of Kirin beer, cost 100 yen, or about 33 cents! Life was good.

For clarification, sushi falls into a Japanese culinary genre defined by its composition of lightly vinegared rice, called sushi meshi. It is topped, rolled with, or sandwiched with other ingredients, which may include fish (either cooked or raw), sea plants and other vegetables. Sashimi is sliced raw fish. Both are served with soy sauce (shoyu in Japanese) or sometimes ponzu, a citrus-enhanced shoyu, and wasabi. Wasabi is a root in the horseradish family, which in its natural form has been very difficult to find in the United States. Almost all of the wasabi served in the U.S. is actually a composition of dry mustard and horseradish powder mixed with water into a paste and artificially colored with yellow/green food dye. At the best restaurants in Japan, the wasabi root is grated at the table with a sharkskin file. Some real wasabi is being grown on the West Coast, but it is very expensive.

Cutting to the focus of this article, here’s a disclaimer: This is about eating raw saltwater finfish and does not include shellfish. And my first piece of unconditional advice: DO NOT EAT RAW FRESHWATER FISH. There are many known deleterious bacteria and parasites that live in fresh water and in the flesh of the denizens that swim therein. (Some 50 to 70 percent of northern pike harbor tapeworms.)

Moving beyond sashimi and sushi, many other cultures serve fish that are not cooked with heat but instead acid marinated or pickled. Almost all Latin American cultures have a version of ceviche, which is raw fish “cooked” in lime or other citrus juice, and those of us who come from Eastern European decent are familiar with pickled herring. Gravlax, a Scandinavian salt-cured salmon, is also technically raw.

Well, the truth is that eating raw saltwater finfish is not completely safe; it would be feckless for me to tell you otherwise. As is often the case in life, you take your chances for what you get. If you are like me and live to eat well, then it may well be worth the risk.

So what is there to be afraid of? To start with, anisakis. To quote Mary Roach (because I couldn’t have written it better) from her Health magazine article about eating sushi: “This is a creature with few charms. It excretes waste from its face. In place of a nose it has a prominent Black & Decker-esque attachment called a boring tooth, which it uses to drill holes in human intestines. It does this because it wants to get into the abdominal cavity, which it hopes will be a more hospitable place to settle down and raise a family. Thankfully, it’s not. An anisakis worm needs to locate a seal stomach to complete its life cycle and reproduce.”

Tuna, which are pretty much constantly on the move and hang out in deeper waters away from seals, are generally safe. Bass and bluefish, on the other hand, can be risky.

Freezing fresh fish at very low temperatures kills all parasitic worms. Commercial freezing at -40 degrees Fahrenheit kills any parasite in 14 hours, while a 10-degree home freezer requires five days to kill all the parasites. Although freshness of fish is emphasized in the sushi trade, most of the raw fish served at sushi bars and restaurants here and in Japan is sliced from frozen fish to hedge against the threat of parasites. Well-trained sushi chefs are able to detect parasites visually, through close inspection while slicing the fish or by holding a fillet up to a bright light in a process called candling.

Cold smoking does not kill parasites, and neither does pickling or marinating in a citrus or acidic solution. So even eating ceviche poses a risk if the fish has not been frozen.

I guess you should hear all of the bad news that’s out there. There is also thiaminase, an enzyme present in the flesh of a few saltwater fish that breaks down thiamine (vitamin B1) when ingested. Consequently, the regular consumption of raw fish could result in vitamin B1 deficiency. The clinical signs of thiamine deficiency are central nervous system disorders (called polioencephalomalacia). It sure doesn’t sound good, but according to publications of Cornell University’s Department of Animal Science, “Humans, even sushi lovers, rarely eat enough raw fish in their diet to constitute a problem.”

The good news is that most parasites cannot adapt to human hosts, and they usually are digested with no ill effects. They will rarely pass into the bowel, where they may cause symptoms that include violent abdominal pain, nausea and vomiting. Actual data on raw-fish-eating gourmands experiencing parasitic or bacteriological ill-effects on our shores is almost impossible to find.

So as a chef, regular consumers of raw fish (including striped bass, fluke and flounder) should consider yourselves duly warned. Be afraid if you want, but I’m not.