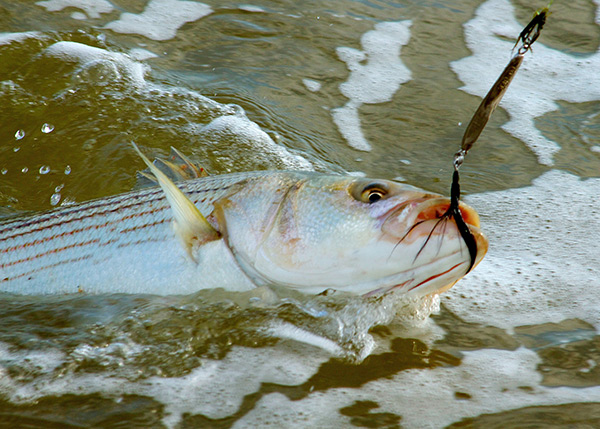 I’ve found, particularly in New Jersey, that metals get a bad rap. Though they are the preferred lures for false albacore, I rarely see surfcasters interested in stripers putting them in their plug bags. Instead, they usually go for bucktails, a few SP Minnows, and a black Bomber, along with all kinds of wood plugs and their molded epoxy brethren. Unless the anglers are targeting bluefish, metals don’t make it into many plug bags, and certainly not into night bags. But why not?

Metal lures have a lot of positive attributes. They cast well regardless of the wind speed and direction. They come in a wide range of shapes, sizes, and weights. They are simple, effective, inexpensive, and widely available, unlike many designer plugs. Furthermore, no matter how hard I smack a bridge or a rock with a spoon, it’s coming back in one piece.

I started asking, “Why not metals?” after an outing last year. It was well after dark, maybe 2 o’clock in the morning, and the area was loaded with bait. We were watching big fish blow up in the middle of a channel below a bridge, but there was a strong wind blowing right to left across the casting zone in such a way that the wind was blowing us off the fish. These fish were eating peanut bunker, which were only about 4 inches long, and lures with matching profiles couldn’t make it out there. The lures that could cast that far were too heavy to stay in the strike zone. My buddies and I cast like madmen and tried everything in our bags, and we all came up empty-handed. It was a truly frustrating situation, one that I think every bass fisherman has been in. The fish were there, and we couldn’t reach them.

It started me thinking, though. What lure cuts through wind, casts a mile, and can stay up in the water column while not rolling in heavy current? It was a short list, and I settled on a 2-ounce Krocodile spoon I had rusting in the bottom of my plug bucket. After the bite ended, I threw it a few times and, at 2 ounces, it got to where I needed it to be. The only remaining issue was visibility. Even though there was plenty of light in the water because of the bridge, it wasn’t remotely enough for me to have confidence that a fish could spot the steel’s silhouette. My solution? I sanded it down and painted it white.

I showed up the next night and started working around the bridge. I’d replaced the treble hook on the back of the spoon with a single hook that had some bucktail on it, and in the water, it looked like a jointed plug. However, the bite wasn’t anything like it had been the night before. Some small bluefish had moved in and were ripping up everyone’s plastics. I didn’t think I’d catch anything on the metal, but I wanted to see how it worked. Three or four casts in, much to my surprise, I pulled a short bass out of the channel. A few casts later, I had another one. This kept on until the tide flipped, and by the end of that short window, I’d caught six or seven shorts, one good fish, and a blue. The next day, I made four more variations on the same design, using other metal lures that had similar profiles.

I discovered over the next several weeks that a painted metal was a sleeper in certain situations and still an excellent choice in others. I fished with white metal out front at night, around Asbury Park and Sandy Hook, and caught fish. I fished at Shark River, working the inlet, and did the same thing. The bridges around the Hook were also productive for me. These situations require different techniques, but all of them produced fish this year. For the most part, I use the same 1.5- and 2-ounce pieces of white steel with bucktails.

The techniques that make painted metal effective at night largely depend on conditions. How clean is the water? How much light is in it? At what depth are the fish feeding? Is there current? In murky situations, I found white to be the best color, particularly when coated with a clear spray epoxy or enamel, which gives the steel an almost glow-in-the-dark look as light refracts in the coating. If there is a lot of ambient light, from a nearly full moon or around a bridge, white is also your best bet. If you’re fishing in serious darkness, my pick would be a one-ounce black metal with a black tail. When retrieved high in the water column, it creates a strong silhouette against the surface.

I spend a lot of time at night fishing in heavy current. The techniques I use depend wholly on that last series of questions. My go-to is a two-ounce Sea Striker casting spoon that’s caught so many fish, I’ve had to repaint it twice. In heavy current, I use this piece of steel a lot like a darter or a bucktail, with one exception. Like a darter, I move it as slowly as possible and let the current work, but I don’t pump the rod to add any action. I find that with the tide moving away from me, the metal can wrap up on itself with any rod action. Reeling dead-slow to maintain depth and contact with the lure, as well as having your rod in the right position to find that depth, are very important when fishing tides moving away from you. It’s also important to know where the drift will present your lure. I like to cast ahead of structure, such as the submerged rocks at either side of an inlet, and drift across them, as close as I can. Usually, I get picked up right as I come off the structure.

In situations where you are casting up-current, I find that it’s much more difficult to maintain contact because of the hydrodynamics of a wide swimming tin. If you are in a situation that dictates fishing into the current, you have options. This is the only situation where I will bump the rod to give the metal a little extra action. I find that the fish tend to come up off the bottom and take the metal while it flutters down from the bump. If they’re up high, point your rod as high as possible, don’t let the metal sink when it hits the water, and bump it gently but rapidly the whole way back to you while maintaining contact. The idea of bumping the metal is that it rises, exposing the wide part to the current. This pushes the lure up in the water column while costing you the least amount of your cast.

At night, a white metal makes for a great searching lure. Fish see much better at night and in murky water than most anglers realize. Some studies suggest that a striper can see 16 feet in pitch-black water. In clear water, with a little bit of light from the moon or a nearby bridge, they can see farther. The action of a spoon creates a great deal of vibration that you can feel on your rod. This can be detected by a striper’s lateral line.

Out front, fishing at night with painted metal has caught me my two largest bass this season. When I walk the beach at night, I’m usually throwing white metals with a steady retrieve and varied depths. The metal flies much better than any of the plugs in my night bag. Often when I find fish like this, they’re beyond the first bar and I would have never reached them with my other go-to lures. What’s nice about this is being able to pattern-fish one lure when you’re not sure what depth or speed to be fishing.

It’s very easy to modify metal for night fishing. The materials I use are easy to find at Home Depot or Lowes – a flat white, no-gloss primer and a clear, waterproof enamel. As I mentioned before, the light in the water, however little it is, refracts within the enamel, giving the lure the illusion of glowing in the dark. I use a single hook for two reasons: one, I hate trebles. Two, the single hook with bucktail or synthetic hair gives the look of a bulky, jointed plug.

Metals at night aren’t perfect in every situation. In waters with low visibility and no ambient light, and in particularly cold water, they aren’t likely to be effective. I still find myself throwing a vibrating plug, now and then, but lately I’ve been catching more like this. Oddly enough, most of my bass have been caught on white metal this year. I’ve only nailed two bluefish on the metal, and the rest of my blues are on plugs. Some days I feel like I live in an alternate universe where bass chow on metal and blues only want my plugs, but then again, there are worse realities. As long as there are fish, right?