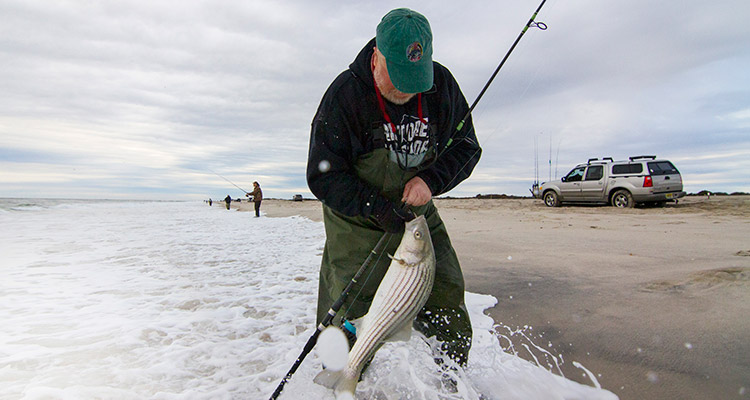 Work the edge of the surf to put more bass on the beach.

There are three mistakes surf anglers often make. They are underpowered, they walk out too far in calm water, and they don’t work the “lip” of the ocean beach. For now, I’ll ignore underpowered and deep wading in favor of focusing on working the lip.

The lip is the place along the surf where a wave surrenders its last gasp before collapsing and running up the slope of the beach. The lip is a modest drop-off of several inches formed primarily by the last lift of a wave followed by the backrush of sand-filled water running down the slope of the beach. It is the spot where the lifting wave and backwash from the previous wave meet, create a lot of turbulence, and deposit suspended sand as the turbulence eases.

The lip is either missing or minimal when the beach is flat and not sloped because the waves move about without much ambition and thus there’s little turbulence; typically, poor fishing is the result. A second factor affecting productivity is wave action. Obviously, it’s a waste of time to work a lip when the sea is calm because without lifting and crashing waves there can be no turbulence. Without turbulence, there is no advantage for predatory fish.

Why Work The Lip?

Baitfish and gamefish relate to edges. It’s an instinctive behavior. Small fish cling to the lip in an attempt to hide from predators, while predators instinctively stalk the lip to feed. Stripers dominate this zone for two reasons. First, stripers are more patient feeders than blues and will slide back and forth along the edge for periods of time. Second, stripers are efficient, and the lip offers feeding opportunities with a minimum expenditure of energy.

However, stripers don’t have an exclusive occupancy clause in their lip lease. Blues sometimes feed at the lip, as do fluke and weakfish. Fluke, like stripers, often linger at the lip, while blues and weaks are drive-by visitors. I hunt specifically for bass at the lip, and anything else I catch I consider to be a bonus. I pay a lot of attention to the lip because if there are only a few stripers around and there’s some wave action, an angler’s best chance of catching a fish will be at the lip.

The lip can be effectively fished with a relatively small array of lures. These include bucktails, small metal lures, small subsurface swimmers, and soft plastics on leadheads. Presenting metal-lip plugs, heavy tins, darters and bottle plugs in turbulence at the lip can be difficult. Metal lip plugs, bottle plugs and darters all flop in turbulence. It’s possible to use poppers and pencils, but in order to be successful, an angler must cast parallel to the beach, be proficient at reading the waves, and be able to place the popper into the correct trough at a precise moment. I fish with surface lures at times, but it certainly isn’t the easiest or the best way to approach the lip. Among the better lure choices, the most effective and versatile is a bucktail with pork rind. I prefer swing-hook bucktails from Uncle Josh and 240-S red-and-white pork rind.

Bucktails are most effective at the lip, in my opinion, for several reasons. First, bucktails will not spin in the backwash no matter how fast the water moves. Second, when embellished with pork rind that flutters in turbulence, a bucktail mimics a baitfish desperately trying to hold its position in the water. Third, bucktails come in a vast array of sizes, and an angler can carry weights from 3/4 to 4 ounces with increments as little as 1/4 ounce. Therefore, it’s always possible to use a bucktail of the exact weight needed to remain suspended at the lip and not spin or flop. Remember, the bigger the waves, the heavier the bucktail. Fourth, an angler can impart a variety of subtle motions to a bucktail as it “sits” stable in the water in the lip zone. Many of the lures mentioned above will sink to the bottom or spin, flop or rise to the surface. Lure control at the lip is crucial to success, and I have found that I can control bucktails better than any other lure.

Lure control is vital for several reasons. First, the lip is a narrow feeding zone and although fish glide along the edge, they don’t tend to move far in order to catch food. So, it’s important to remain in this narrow strike zone for as long as possible. This means a balanced presentation so the lure remains in the feeding zone for some time. So, using a 3/4-ounce bucktail in 5-foot waves at the lip will fail, and so will a 3-ounce bucktail in 1-foot waves. Second, use the water smartly. This means reeling quickly when a lifting wave pushes the bucktail at you, and not reeling at all when the backwash pulls hard. It’s a “feel” thing, but the right feel can easily be acquired with practice.

In 2013, Long Island beach rats enjoyed a tremendous three-week run of stripers feeding on sand eels in late October and early November. As was true in 2010, most anglers used metal lures with green tubes attached. True, the casting and cranking tin-and-tube lures caught fish, but it couldn’t match the productivity of anglers casting bucktails. It didn’t take long for many of us to discover that more stripers fed at the lip than farther off—not to mention that the stripers at the lip were easier to fool. There were days when I didn’t cast, but rather flipped the bucktail beyond the white water at the lip and patiently worked it there. I’ve said it before and I’ll say it again—stripers love edges, and the lip represents an edge.

For those of us who have worked the lip for decades and enjoyed its magic, working the lip is second nature and we don’t do a lot of thinking about it. Our motions are reflexive. However, when I think about it, I realize it’s a technique that’s no different from others that need to be mastered.

There seems to be some disbelief about the productivity of bucktails. For example, one afternoon last November I caught fish after fish on a bucktail while fishing on one side of a submerged bar, while another guy on the other side of the 20-foot-wide piece caught nothing using the tin-and-tube combo. Eventually, this guy walked up to me and before I made a cast, asked, “What are you using?” Either this fellow was uncomfortable with bucktails or didn’t carry any because after I shouted “bucktail” into the wind, he returned to his spot and continued to cast the tin and tube unsuccessfully while avoiding the lip.

The Importance of White Water

I catch fish in harbors, along the Long Island Sound shore, and in back bays and inlets when the water is calm and there is no lip, but the ocean is different. Sure, there are calm days when blitzes occur in the trough, but these are far from the norm.

Obviously, white water in general is more important in the ocean surf than sheltered waters, but it’s crucial at the lip. However, the white water connection isn’t without its drawbacks. Although winds make waves that produce the white water, they also lift seaweed into suspension and push it towards the beach. Big waves may also muddy the water close to the lip and, depending upon how dirty the water is, may shut down the fishing. Big waves intimidate fishermen, and I admit rough surf needs to be managed. Again, there’s a balance to all this that must be appreciated. Many anglers don’t try to manage such conditions, preferring to turn tail and try another day, but they are missing some great fishing.

Room To Spread Out

On more than one occasion I’ve walked past fishermen who are catching fish and saw the disparaging looks on their faces, perhaps thinking I was nuts. That’s okay, because what they didn’t know was that I decided it was a “lip” day. Once I commit to working the lip, including casting parallel to the beach, I know I’ll need space. An angler can’t properly work the lip while in a gaggle of other anglers. So I pass the gaggle in favor of unused structures down the beach.

The magic of the lip isn’t a closely guarded secret. In fact, it isn’t a secret at all. The lip zone is available to all anglers, but many overlook it. So I offer this advice. Take the time to understand the zone, develop comfort using bucktails and give yourself permission to fish the zone with ease, and you’ll catch a lot more fish.