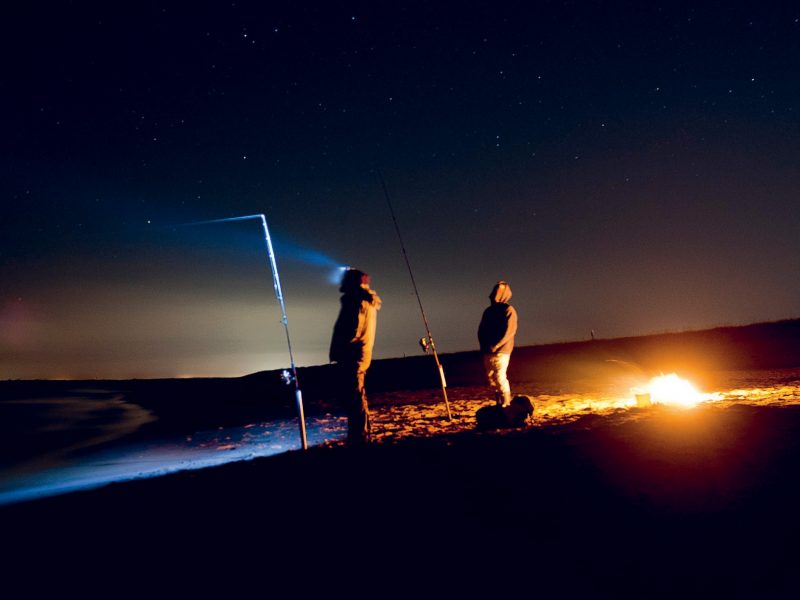 The spiked rods nodded gently toward the ocean as the gentle surf caught the lines and released them. I watched them from the warmth of our beach fire, squinting to see the black rods against the black background.

I don’t usually like making fires while fishing for the same reason I try not to shine my truck’s headlights on the water I plan to fish—I believe it spooks fish. But on that night, the warmth from the fire kept OTW photographer Eddy Stahowiak and me fishing long enough to satisfy our curiosity about whether cod still swim in the winter surf.

Every year after the stripers leave and my surf rods begin to accumulate dust, I become jealous of the fishermen from decades ago who enjoyed year-round surf fishing thanks to a bountiful population of codfish. The surfcasting old guard is full of stories about warming their gloves on a truck’s manifold while waiting for cod to knock the ice off their surf rods. Frank Daignault wrote two stories for On The Water Magazine about catching big cod on clams and plugs in the Rhode Island surf.

It’s no secret that codfish have fallen on hard times. And, with fewer cod in the ocean, there is less of a chance enough of them will venture into the surf so that we can target and catch them. But, I still dream that, somewhere, a tight-lipped old salt is catching cod off the beach while the rest of us are pulling perch through the ice.

For the cod, I bought several cherrystones at a fish market, which I then shucked and salted so they would hold the hook better. For the fishermen, I bought a few nips of blackberry brandy which, according to several decades-old accounts of winter surfcasting for cod, is an essential beverage.

I’d amassed an impressive list of places where cod were once caught in the surf, including Deer Island, Nauset Beach, the Cape Cod Canal, and Matunuck, among others. We chose one that required minimal walking distance from our trucks to the surf, as in addition to our surf and camera gear, we had a large bundle of firewood to carry.

As we pulled into the parking lot, I hoped to find another truck adorned with fishing stickers. Finding another surfcaster out there fishing for cod would be almost as good as actually finding the cod. However, the lot was empty except for a deer that bounded into the dunes as we approached.

Eddy built the fire while I rigged and baited the rods. A few minutes later, with the fire warming our backs and two clam baits milking scent out into the cold Atlantic, we twisted the tops off our nips, tapped the tiny plastic bottles together, and toasted to beating cabin fever.

During our three hours of fishing, we caught no cod, but we did find some life in the surf. On every cast, our hooks were stripped clean by crabs, and at one point, I felt the distinctive tap-tap of a small, hungry fish. As we packed up our gear, Eddy and I agreed that we’d missed the bite—by several decades at least.

Still, one fishless trip means nothing when it comes to the potential of surfcasting for cod. I still believe that somewhere in the Northeast, codfish swim into casting range in the dead of winter, and that an old surfcaster knows just where to find them.