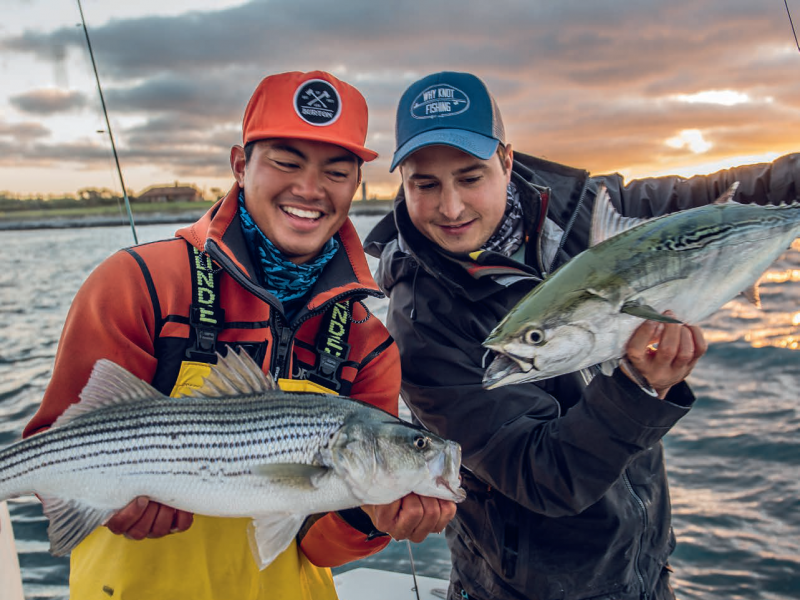 It was just a few days shy of October when I realized I hadn’t been striper fishing in more than two weeks. Two prime weeks of fall-run fishing forever behind me; thousands of bass moving from my after-work-outing radius to weekend-road-trip range.

When the fog cleared, I was sitting amid a scattering of leader clippings from a spool of 12-pound-test fluorocarbon and a pile of size 4/0 treble hooks as I re-rigged my rods and lures for the following morning’s fishing. Like so many bay anchovies, my thoughts had been consumed by false albacore. The fast and flashy fish had cast a spell on me, pulling my attention away from the stripers migrating through my home waters.

By the time the albies arrive, striper season in New England has been underway for four months. It will continue for roughly one more month after the albies depart. So, a few weeks devoted to Euthynnus over Morone should be perfectly acceptable except those are prime striper weeks—the weeks when the “Big Push” happens. By the time I emerged from my 2020 albie haze, that push, the major movement of large stripers, had already gone, leaving me fishing for the smaller, faster-moving schools—the scraps of the fall striper run.

Years ago, I wouldn’t have had to choose. Burning the candle at both nighttime striper and daytime albie ends was easy. But with family time consuming the hours once spent napping between the end of work and the beginning of the night tides, I’ve been forced to reallocate my September fishing time.

No striper, regardless of size, can match the drag-sizzling run of a hooked false albacore. The way an albie melts line off a reel is what drives fishermen to catch the so-called albie fever. And we can never get enough. As soon as a released albie bolts out of sight, we need to hear that screaming drag again.

That’s a difference I’ve noticed between catching a good albie and catching a good striper. After releasing a big striper, I feel content to sit back and reflect on the catch a bit. I think that’s because, when it comes to striper fishing, I’m more in control of the size of the fish I catch—to an e xtent. With albies, I’m catching whatever size albies I see on the surface. It’s unlikely that a change in technique or location will produce larger albies. With stripers, however, fishermen can adjust their approach to seek quality over quantity.

I prefer the variety that comes with striper fishing. I can use different techniques to target various sizes of stripers—small soft plastics on light tackle for schoolies, or big live eels on heavy gear for cows. There’s no equivalent in albie fishing—but then again, with every albie fight being an event, I don’t go out seeking big albies, I’m happy to catch any albies. Whether it’s 3 pounds or 13, I know it’s going to rip line off the reel.

A point for stripers is their willingness to accommodate a 9-to-5 work schedule. They’ll feed when the office is closed and the kids are asleep. Albies, on the other hand, keep banker’s hours. There’s a reliable sunrise skirmish, but too often, the action is just getting good when it’s time to go to work.

Of course, there’s no wrong way to spend your September days (or nights) in the surf. Deciding whether to target albies or stripers is a wonderful dilemma to have … one that I can’t wait to be faced with in the coming weeks.