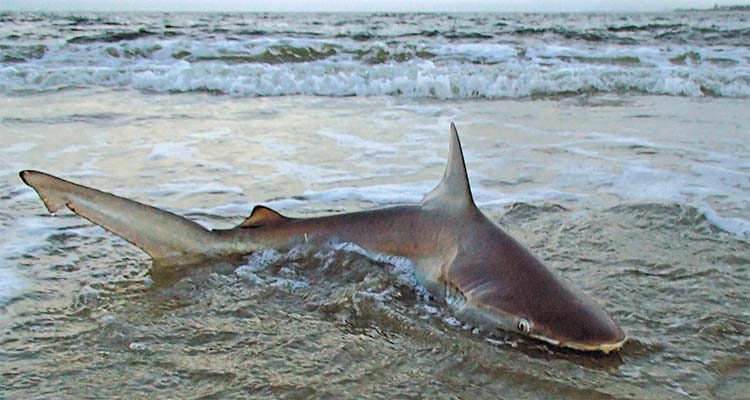 Shark fishing from shore is back in the limelight and improved tackle paired with daring tactics have allowed surfcasters to land monster sharks from the beach.

It was 1998. I had just moved to Normandy Beach, New Jersey, steps from the surf, and was putting in innumerable hours tangling with stripers and blues. One evening when bringing over fresh striper fillets to my neighbor, Jackie, her 85-year-old father, Buddy, opened a book of his old fishing pictures from the 1940s. As the pages turned, black-and-white photos of huge dusky and brown sharks weighing 100 pounds and more got my adrenaline flowing. Buddy spoke about beaching large and in-charge sharks. He hadn’t fished for more than 40 years, nobody seemed to think sharks swam in the Jersey surf anymore, and the idea of targeting them from the beach was lost to the sands of time. That is, until I saw those pictures.

My first experience with a shark in the Jersey surf came in the summer of 1998. Schools of 30- to 40-pound bass were close to shore, feeding on the recent population of menhaden that had returned to New Jersey in force. I was chunking on a late June morning off Mantoloking when my rod went down. Before I could get to it, the rod was pulled out of the sand spike and dragged into the undertow. I caught up to it and set back on the hook, at which point my 7500 Penn reel and 9-foot surf rod buckled like it was about to shatter. All I could do was hold on.

About 200 yards offshore, as my 50-pound-test braided line liquified off the spool, a wicked scythe-like tail ripped up the surface in a thrashing frenzy. Before I realized what was happening, the last wraps of line disappeared from my spool. I learned right then and there that I’d need heavier gear and a better plan.

Early on, I experimented with paddling large baits out on a surfboard. I’d bring a live bunker and a block of chum to drop offshore under the moonlight. I quickly abandoned that method when one night, a thresher tail whipped in front of my face in the pitch-black darkness 300 yards offshore.

When I realized that casting the baits would be the best (and safest) option, I began looking for a rod with the backbone to subdue a big shark and the ability to cast a bait far enough to reach them. My current setup is a Shimano Ultegra 10000 reel spooled with 65-pound PowerPro braided line matched to a 12-foot Shimano Tiralejo rod. The rig itself consists of a 200-pound-test barrel swivel, 24-inch section of 100-pound-test monofilament line crimped with size 1.3 crimps to a three-way swivel with a 3-ounce Pyramid sinker, then another 30-inch section of 130-pound monofilament line crimped to a 12-inch steel leader and a 10/0 Gamakatsu Big River hook crimped onto the end. The 12-foot rod provides enough leverage to cast a bunker chunk on the long rig.

Sharks swim in the New Jersey surf from June to August. The prime tides are three days around the full and new moons. The sharks are most active in low-light conditions, so plan on fishing the early morning or evening hours. If fishing into dark, let the baits soak at least until midnight.

When the shore shark craze really caught on in Jersey around 2006, hardcore bayside anglers knew that big brown, dusky and even bull sharks were coming in to feed around the back side of Island Beach State Park, Long Beach Island and Brigantine. We learned that sharks could be caught in the normally placid bayside waters, off the docks, right under the lights of many Jersey Shore restaurants in front of bewildered tourists.

Anglers worked the docks under night lights, setting up with 30- to 50-class Penn International reels and lofting baits into the holes and sloughs off the docks and Intracoastal Waterway channel. The rigs closely resembled those used by offshore sharkers with 50-pound monofilament running line and a 280-pound shark cable rig with 12/0 Mustad forged hooks, baited with whole fillets of bluefish or mackerel. Chumming off the docks was a little easier than from the surf. A 2.5-gallon bucket of bunker chum could be draped off the piling, where the tide and current carried the scent out through the deeper channels.
Bayside sharkers working the sod banks found the best action near inlets where there was sufficient tidal flow.

Hardcore surf-sharkers like AJ Rotondella of Apex Anglers have been working the big bays to find fish that press the limits of what can be done by shore-based anglers, with 250- to 300-pound sand tigers ranking among his top catches. Rotondella implements the use of a 9-foot Ocean Kayak Frenzy to drop the baits into the feeding lanes of the sharks.

“The kayak allows me to get baits out into the zone and past the rough surf and wave action that tends to push lines in,” says AJ.

AJ’s big bay rig consists of a size 6/0 reel loaded with 65-pound-test braid matched with a heavy rod. Since the baits are kayaked out, AJ uses a long monofilament topshot to prevent the shark’s skin from rubbing against braid. A 100-yard topshot of 80- to 100-pound test does the job.

For landing the monstrous sharks, AJ prefers to jump in the suds, grab the leader, get his hands on the tail when it is safe to do so, then get a buddy to come down and assist with bringing the shark far up enough out of the waves to unhook and release.

With all shore-bound caught sharks, take great care to quickly unhook, snap a photo, and release the fish back into the water. Try not to drag it all the way up on the beach and leave it out of the water for more than 2 minutes. Sharks are hardy creatures, but every moment out of the water is a moment closer to it not surviving. Respect and release all these beasts.

New Jersey’s shore-based sharking may have been forgotten for years, but is now back in the limelight. The resurgence of menhaden and the nearly subtropical temperatures during the summer are attracting sharks into Garden State waters more than ever before, allowing for some truly monumental catches from the suds. The question is, where does Jersey surf-sharking go from here? Right now, it’s a race to the first big thresher from the beach.