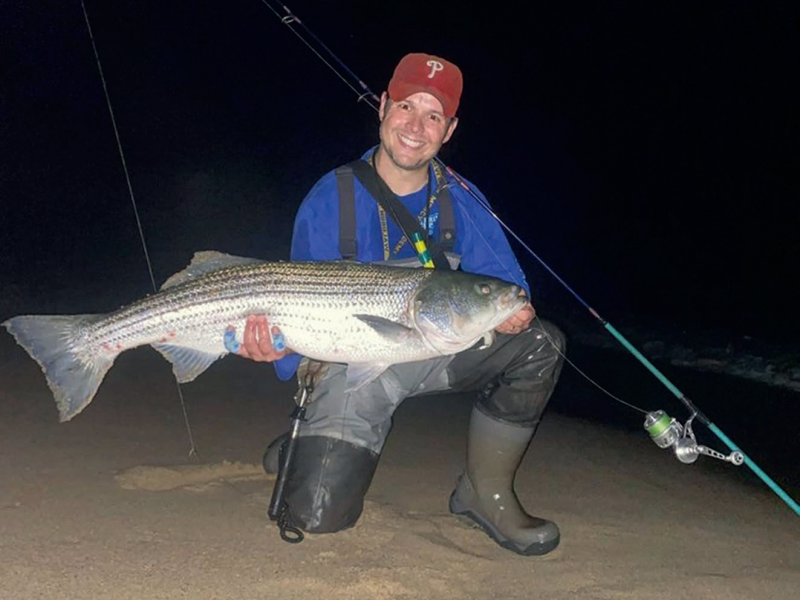 After a few mornings of jockeying for position on the Cape Cod Canal while watching the guys across the Ditch catch more fish, I need to fish someplace where I can’t see the land on the other side. I yearn for the place that, in his article in the May 1998 Issue of On The Water, the late, legendary surf fisherman Steve Shiraka called “The Great Beach.”

In the article, titled “Plug Fishing the Beach,” Steve names the darter-and-dropper combo as the once-favorite offering of Outer Cape casters, reasoning that the rig resembled a sand eel being chased by a larger (but still bite-sized for a striper) fish.

The sand eel population was in better shape in those days, with larger sand eels more often showing up in the surf. Steve recommended a 7-inch Red Fin to imitate a sand eel. Steve called the Red Fin a classic in 1998, as it had already been beaching big striped bass on the back beaches for more than 20 years by then.

Steve went on to write that he loaded his Red Fins with 15ccs of water or fish oil, which was more than the 10ccs most fishermen recommend today. Steve wanted his Red Fin digging into the sand, “with the tip of the plug’s plastic lip kicking up puffs of sand as it went along – just like a sand eel does as it pops out of the sand when it is being chased.” In the video below, Jimmy Fee and Kevin Blinkoff talk about minnow plugs and loading a Cotton Cordell Red Fin to increase the casting distance.

“You knew it was working right by looking at the lip of the lure,” Steve went on. “The chrome plating would be sanded off from the edge for about a quarter inch.”

In the 22 years since that article, the Outer Cape surfcasting scene nearly flickered out. Striper-obsessed fishermen from New Jersey and New York, who once viewed the Canal as nothing but a traffic jam separating them from their stripers, now see it as the destination.

There’s no question that the Canal has had the better fishing over the past 10 years – especially when the chance at larger fish is considered. However, the Outer Cape has shown signs of life the past couple seasons. I fished the Lower Cape more in 2020 than I had in the previous five seasons, and looking back at my most productive plugs, I wasn’t too surprised to find they were the same ones Steve listed more than 20 years earlier.

I used a Red Fin to beach my biggest sandy beach bass of the 2020 season, a 30-pounder I caught in late July. While it was loaded, it wasn’t loaded enough to scoot along the bottom as Steve described, though you can bet I’ll have some ready for that purpose this year. A Bomber Long A, though in black, not mother of pearl, caught more of my beachfront stripers than any other plug last year.

Curiously, at the time of his writing, Steve said that chunking with fresh “pogie” was more popular than plug fishing, a juxtaposition of the striper-fishing trends of today. While chunking is at risk of becoming a lost art in the surf, plug fishing is more popular than ever. This would have made Steve happy, since he called plug fishermen “the true hunters of the surf.”

“These people attend a continuing classroom,” Steve went on, “engaged in a process of evolving knowledge of how and when to present a certain lure. This empowers them with a confidence that keeps them one step (and many catches) ahead of the average fisherman.”

While I don’t agree that the decision to fish a lure or bait says anything about the skill of the angler, I agree with Steve that the best surfcasters approach the water’s edge with a willingness to learn and adapt to the conditions at hand—even if that means using the same plugs in the same places surfcasters have been using them for half a century.