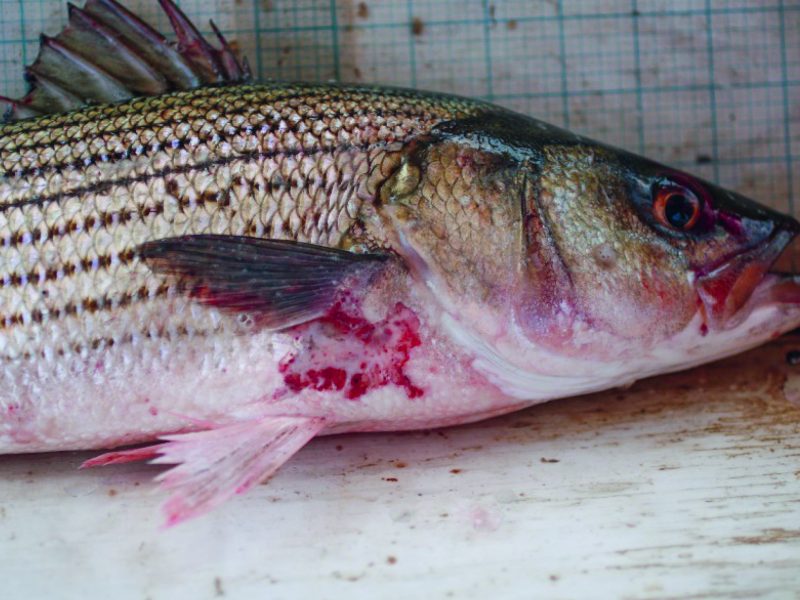 Mycobacteriosis is a word many striper anglers along the East Coast have heard, but few know much about it. Seasoned fishermen may know it to cause bleeding ulcers on a fish’s skin, while to others it may merely be a word referenced in fishing articles or seminars.

Any questions not answered in this article can be sent directly to Joshua: Jmcgi003@odu.edu.

Before starting on my master’s degree, I knew little more than the basics about this disease. I knew it causes bleeding ulcers and that it primarily impacts fish within the Chesapeake Bay. In my 20 years of saltwater fishing and 4 years of surveying recreational fishermen, I saw only one striped bass suffering from what looked like the disease in my home waters of New Jersey. But, once I began my research, looking at mycobacteriosis prevalence among striped bass spawning in the James, Mattaponi, and Rappahannock rivers, I realized there is much more to it than meets the eye.

Where was mycobacteriosis discovered?

Can stripers with mycobacteriosis be treated?

Once a fish is infected, the disease progresses slowly. There has been little evidence of it decreasing in severity and there is no practical way to treat infected fish. Currently, there is not a non-lethal diagnostic test for detecting internal disease. Presence of skin lesions can be used as a nonlethal diagnostic but cannot be used to reliably determine whether the fish has internal disease. One of the fascinating and baffling aspects of mycobacteriosis is that even with its high infection rate in striped bass of the Chesapeake Bay, the disease does not seem to severely affect other fish species that inhabit the same areas.

Striped bass anglers are a passionate and innovative group, so naturally, when they started learning about this disease, they thought of ideas to help combat it. In the mid-2000s, when cases of mycobacteriosis were beginning to rise, some anglers suggested killing any fish exhibiting skin ulcers. This idea is similar to state organizations suggesting fisherman remove and kill all invasive species caught. The thought was if a diseased fish is taken out of the population, it cannot infect another fish.

This is not advised. Fish can be infected with the disease and show no external signs, and, more importantly, striped bass may develop similar sores from causes that are not mycobacteriosis, such as nets, escaping predators, or from being landed by anglers. So, while this idea may be well-intentioned, it is not a practical method for stopping the spread of mycobacteriosis.

How is mycobacteriosis transmitted?

Transmission of mycobacteria in fish is still poorly understood, but it likely involves ingestion of contaminated food and/or being exposed through the water column. When a fish becomes infected, the bacteria are identified by the fish’s immune system; however, mycobacteria can reproduce within white blood cells (macrophages) meant to kill them. In response, the immune system walls off the infection with white blood cells to stop the bacteria from spreading. These collections of cells are called granulomas and resemble lesions found within the lung tissue of humans suffering from tuberculosis, which is caused by another mycobacterium, M. tuberculosis. Granulomas in striped bass are often present in low numbers, but in some cases, they take over most of the spleen or other internal organs.

Along with internal granulomas, fish may exhibit sores on their skin that can vary in size and location, ranging from small pigmented scale erosions to large bleeding ulcers. Many anglers who have caught bass with smaller lesions might take little notice of the marks or mistake them for dirt or debris stuck to the fish. To the untrained eye, it is difficult to notice these marks on the white portion of the bass’ scales and even more difficult to locate them along their black lines. Ulcers can range in size and may be as small as the pupil on the eye of your favorite plug, but they can grow to an inch or more in diameter. Even though most associate mycobacteriosis with skin ulcers, a bass can have this disease internally and not exhibit any signs of external sores.

Can stripers with mycobacteriosis be eaten?

It should be noted that if an angler does catch a legal-sized striped bass that is exhibiting sores and ulcers, there is no evidence that eating properly cooked meat from an infected fish will harm humans.

Can you handle stripers with mycobacteriosis?

Care should be taken when cleaning a fish exhibiting external sores. It is good practice to wear gloves and thoroughly wash your hands after filleting a possibly infected fish. Mycobacteriosis is a zoonotic disease, meaning certain species that infect striped bass and other fish can cause skin infections in humans if the bacteria enters through a cut or abrasion.

How can I help?

Based on previous and ongoing studies, it seems the best way to control this disease is through continued research and by developing management methods. The incorporation of a mycobacteriosis-specific mortality estimate into future Atlantic States Marine Fisheries Commission stock assessments may be a step in the right direction to help striped bass stocks already being impacted by overfishing. As anglers, a way for you to combat this disease is by gaining knowledge and becoming aware of signs of disease when you are out on the water.

Take note of marks you notice on a fish’s skin, whether they are small black dots or large ulcers, and if you are seeing more fish with skin lesions, reach out to your state’s marine fisheries division. You can also help by talking to other anglers about this disease. The more people aware of this issue, the better we, as a fishing and scientific community, can combat it.

Previous surveys in the Chesapeake Bay between 2003 and 2007 demonstrated greater than 70 percent internal disease (disease located in the spleen) prevalence in some ages of striped bass. The percentage of fish with disease (prevalence) increased steadily until age five for both sexes. After age five, disease prevalence in males continued to increase, reaching 90 percent in older fish; in contrast, female fish showed a decrease in prevalence after age six, but stayed between 40 and 60 percent.

Modeling of these data supported the presence of disease-associated mortality, with annual survival chances of diseased fish estimated to be 69 percent to that of non-diseased fish. In a separate study, fish in the Rappahannock River were examined for dermal disease (skin lesions) as part of a tag-recapture study between 2005 and 2012. During it, 22,629 fish were tagged and 1,880 were recaptured over a seven-year period. Agreeing with the findings in the previously mentioned study, skin lesions were associated with decreased survival (i.e., relative return rate), and relative survival decreased with increasing disease severity.6 The relative survival of fish with minor skin disease did not significantly differ from that of externally non-diseased fish, and those with moderate and severe skin lesions demonstrated annual relative survival of 0.84 and 0.54, respectively.

These studies demonstrate that both internal and external mycobacteriosis are very common in the main stem and tributaries of Chesapeake Bay, and that the disease is associated with increased striped bass deaths, particularly when it progresses to the point of severe external lesions. Luckily, due to its slow progression, infected fish can live for several years, thus allowing them to become sexually mature and spawn.

Currently, I am working on my master’s research project at Old Dominion University located in Norfolk Virginia under the guidance of Dr. David Gauthier. I am conducting research looking at the mycobacteriosis prevalence for three of the Chesapeake Bay’s striped bass spawning tributaries: the James, Mattaponi, and Rappahannock rivers. These contribute to the Chesapeake Bay stock, which makes large contributions to coastal stocks. There are a number of other major and minor spawning areas along the East Coast, including the Delaware and the Hudson rivers, and at the time of this article, there is very little known about the mycobacteriosis levels in either of them.

Field surveying for my project will be done in collaboration with the Virginia Institute of Marine Science during their “Evaluation of Striped bass Stocks in Virginia: Tagging and Monitoring Stocks in Virginia” taking place between February and May of each year. For fish caught and released through electrofishing, only external lesions will be recorded, and fish from gill nets will have both external and internal disease recorded. My findings will be used in conjunction with previously mentioned studies looking at relative survival of diseased fish to better estimate the effect mycobacteriosis has on striped bass. Data regarding skin and internal disease will be compared for fish of different year classes within the same river and between fish of the same year class between different rivers. Comparing disease prevalence between these two groups of fish could identify localized or regional risk factors for the disease.

It has been theorized that hypoxic events occurring in the Chesapeake Bay could be linked to increased disease prevalence, as this may force striped bass out of deeper and cooler water and into unfavorable warm surface-water temperatures during summer months. Prolonged and frequent exposure to hypoxia and increased water temperature can be detrimental to striped bass with mycobacteriosis, and fish may become more stressed, thus allowing the disease to progress at a faster rate.