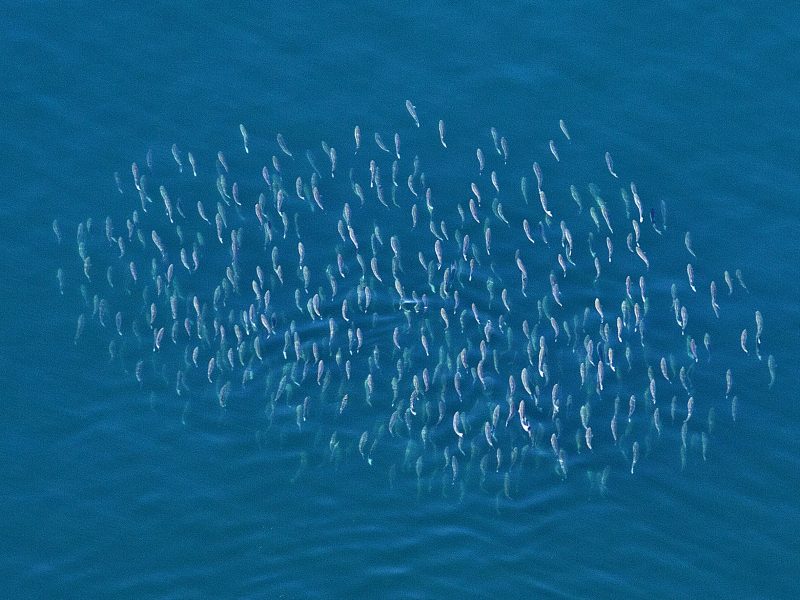 From sometime in March to sometime in December, wader- and wetsuit-clad fishermen enter the ocean, hoping to encounter a great seven-striped fish. During the striper migration, ten months of high drama play out from Maine to New Jersey. Sleep is foregone and meals are skipped; big fish are bested and bigger fish are lost; lies are told and truths are withheld; friendships are made and rivalries are formed.

The season itself is ever-changing; the bass, oblivious to the fervor their presence has created on the land, follow their instincts, retracing paths that their kind has been swimming for thousands of years (or the past 100 years in the case of the Cape Cod Canal). Stay in tune with the rhythm of the striper migration, and you’ll stay on the bite all season long. 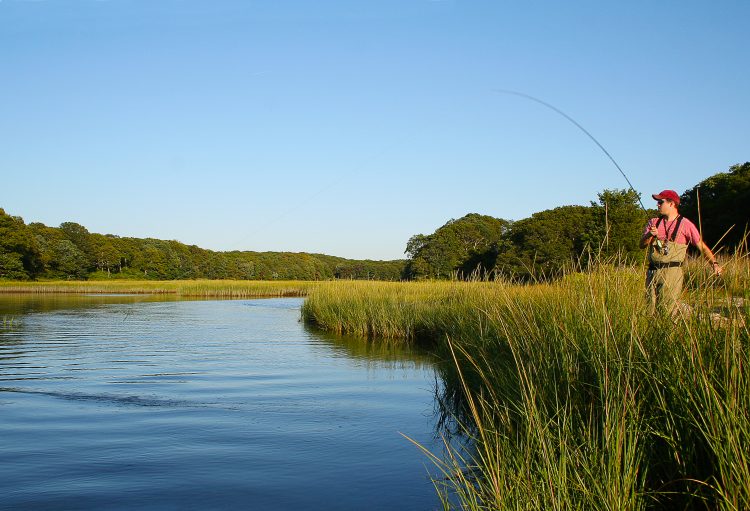 In March, most migratory striped bass are heading to their spawning grounds, making New Jersey the most likely place to encounter good fishing. New Jersey is situated between two major spawning rivers, the Hudson and the Delaware, plus there are several smaller Garden State rivers that have spawning populations of their own. As bass approach these rivers, making their way through the back bays and estuaries, they’ll stop to feed along the way. Baitfish can be few and far between in the cold March waters, so stripers do much of their feeding by rooting along mud flats for crabs, worms and grass shrimp. Fresh surf clams or sand worms on a simple fish-finder rig is the best bet for March bass. Sometimes, a school of bunker will move into a bay, particularly at the northern end of the state, but with water temperatures in the 40s, don’t expect to see much surface activity from the bass.

By April, most of the Northeast’s big bass will be in the rivers, and fishermen looking to hook a cow should set their sights on the Delaware, the Hudson and the Connecticut. While spawning will be their main objective, the bass will not pass up the opportunity to feast on the incoming schools of anadromous river herring. At the mouths of the rivers, there should be schools of adult bunker staging, and with water temperatures warming into the 50s, the stripers will begin aggressively hunting them.
Above the salt line in the rivers, soft-plastic stickbaits, minnow plugs, and walking topwaters will imitate the herring, unless you are on the Hudson, where using the real deal is still fair game. Bloodworms will also get the attention of big river-run stripers, but if catfish and white perch are around in force, using the wrigglers can be a costly proposition.

May: Stripers in the Big Bays

Though the Hudson River stripers are still feeling amorous this month, the Delaware stripers will be on the move, and they’ll be joined by post-spawn stripers from Chesapeake Bay. Hungry from the recent spawn, these fish will be looking for the fattiest meals they can find, and in the fifth month, that means bunker. Schools of Atlantic menhaden will have been filter-feeding, mostly unbothered, in large bays for the past month, but in Raritan, Jamaica, Great South, Narragansett and Buzzards bays, that’s about to change. Bass are drawn to the bunker schools like moths to a flame, and the savagery often moves within range of shore-bound fishermen. Metal lips and pencil poppers are great menhaden mimics; a weighted treble hook will help surfcasters get the real thing, either to live-line or chunk.

Huge schools of baitfish and ideal water temperatures bring stripers to the beaches in June. Just about any ocean beach has the potential to see a run of bass, but Race Point in Massachusetts and the beaches of Northern New Jersey can have especially spectacular action.

The first run of stripers through the Cape Cod Canal in May usually finds its way to the sand eel-, sea herring- and mackerel-rich waters off the tip of Cape Cod by early June. These first run stripers—combined with the bass that took the long way around the Cape—reliably hit the beach at Race Point, allowing surfcasters to catch big numbers of bass from schoolie-sized to 20-plus pounds.

The New Jersey spring surf-fishing hasn’t been as reliable in the past few years as it was a decade ago, but there’s still a chance that the bunker will hit the Monmouth or Ocean County beaches, bringing big stripers with them. A good network of fishing buddies will be your most valuable tool to tracking down these bass. In the past, the bunker blitzes were an afternoon affair, so you won’t need to wake with the sun to put a big bass on the beach.

As the summer sun warms the waters beyond the comfort zone of stripers, the striper migration continues, with bass leaving the rivers and bays to push north. Baitfish factories like the Merrimack and Essex rivers will be pumping out easy meals during the hot summer months, drawing large stripers to settle into the cool waters of the North Shore of Massachusetts. Cast live eels or needlefish plugs, but make sure you have some topwaters on hand if you’re lingering past sunrise.

Hot mid-summer temperatures also flush bunker and stripers out of Narragansett Bay, creating big-fish opportunities for surfcasters in Jamestown and Newport. Fish large plugs or live eels during the night tides to connect with these big stripers. As adult bunker schools move north from Monmouth County, New Jersey, they spread out along the South Shore of Long Island, bringing the big bass with them. The bait and bass occasionally hit the surf, particularly around the inlets.

The August moons bring bass into the rocky shorelines of Montauk, eastern Connecticut, the North Shore of Massachusetts, and South County, Rhode Island. But if you want to catch them, you’ll need to be nocturnal. Live eels are the standard fare for summer surf stripers, but anglers also have success with soft-plastic stickbaits, Danny plugs, and darters. 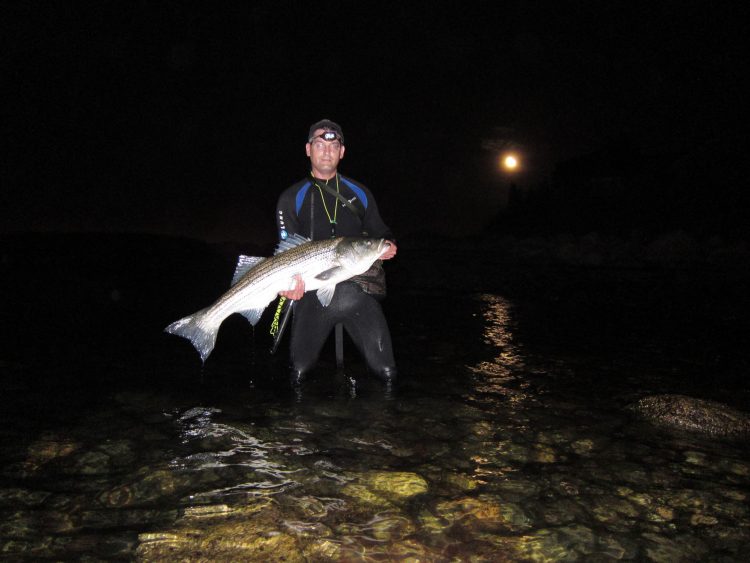 The summer-resident schools of bass in Cape Cod Bay start the annual fall striper migration south sometime in mid-September. Some argue the fall striper migration begins in late August, when bass begin taking the shortcut through the Cape Cod Canal. These bass usually make their move at night, following the west-moving tide. Heavy jigs bounced along the bottom or eels drifted in the current produce fast action, with a reasonable chance at hooking a striper larger than 40 pounds.

The big-fish action intensifies in eastern Long Island Sound, with some of the largest stripers of the year being taken under the September new moon. Once again, don’t forget the eels.

Falling water temperatures force baitfish out of the backwaters where they collide with bass, heading southbound on their annual migration. The encounters create the biggest blitzes of the year, all throughout the Northeast.
Montauk is the obvious choice for many surfcasters, as the sight of thousands of stripers annihilating dense schools of anchovies under the lighthouse marks the highlight of the season. 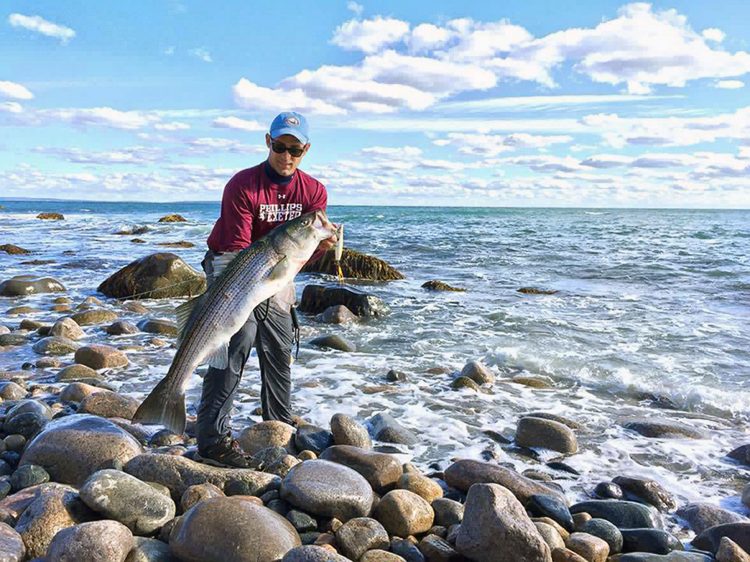 However, the east end of Long Island isn’t the only place to find blitzing bass. South County, Rhode Island saw huge blitzes of bass and blues in October 2015 and the fall of 2020, as schools of peanut bunker kept the gamefish close to the beach. Monmouth County, New Jersey is another good bet for an October blitz. On October 31, 2014, the widespread mayhem of “Blitz-o-ween” spanned several towns in the northern half of the state as surfcasters cast metal-lip plugs and bucktail jigs to slammer blues and 20-pound-plus stripers gorging on squid and butterfish.

By November, the bulk of the striper run has reached New York and New Jersey. Big stripers can be found along the western South Shore of Long Island, and from Long Beach Island north to Sandy Hook. Many fishermen hold out hope for sand eels to move within range of surfcasters, as stripers will stop to feed on these slender baits for days at a time. Island Beach State Park, with its sandbars and holes, can be red-hot when the sand eels move in. The same goes for Democrat Point on Long Island.
If large baitfish linger, big bass blitzes could last through mid-November, with Island Beach State Park again at the heart of the action. In New England, though the run is winding down, quality stripers can still be found for those fishing the night tides in South County, Rhode Island.

The main migration of stripers is usually followed by a final wave of schoolies along the beaches, with the South Shore of Long Island and northern New Jersey being the best bets for bidding farewell to the bass migration.
After that last school continues south, Striper Season ends right where it began—with a small pack of schoolie stripers following a sun-warmed outgoing tide into a southern New Jersey backwater. A 5-inch soft plastic on a light jighead worked near the bottom will be your ticket to hooking the last bass of the year.