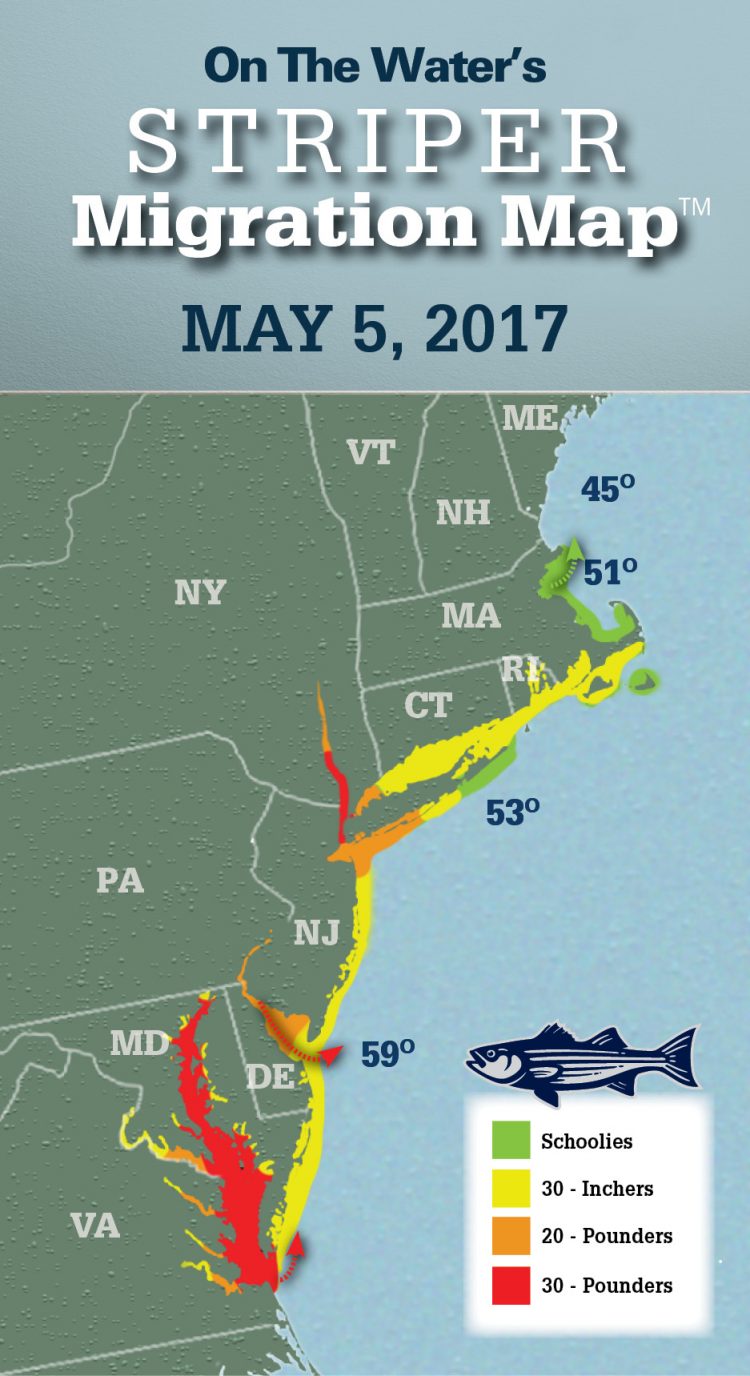 The migration is picking up speed as more and larger stripers are moving through the waters of the Northeast. Keeper stripers have reached Cape Cod, while big post-spawn stripers are leaving Delaware Bay. There are still big numbers of post-spawn fish in the Chesapeake Bay, but they are steadily moving out and making their way north.

There are still some prespawn stripers moving up the Chesapeake Bay, but for the most part, the fish are making their way out. The fishing was slow this week, according to the Maryland DNR Fishing Report, with many fish still staging in the rivers or just outside before they make their move out of the bay.

Big bass have been making their way out of the Delaware River, with some fish already rounding Cape May and heading north, according to our Southern New Jersey Fishing Forecast.

A handful of 20-plus-pound stripers have come from the South Jersey surf and inlets, while keeper-sized fish are thick in the back bays. Many of the prime spots have been taken over by big bluefish, but fishing bait or the bottom or going out at night has the potential to produce good-sized stripers.

The Raritan Bay bass bit has mellowed out many of the fish have continued on their migration up the Hudson River. Still, fish to 30 pounds have been caught trolling and chunking in recent days according to our Northern New Jersey Fishing Forecast.

According to our Long Island- New York fishing report, keeper-sized stripers are working their way east along Long Island. There are plenty of schoolies around the entire island still, but the bigger fish are concentrated in the Metro Region, where pre-spawn Hudson river bass are making a pit stop before continuing upriver.

Bunker schools in Western Long Island Sound have attracted some keeper-sized stripers, and more keeper fish are showing up around the river mouths. Read more in our Connecticut Fishing Forecast.

Keepers are being caught in Rhode Island, mixed in with the large numbers of schoolies in the Salt Ponds and inside Narragansett Bay according to our Rhode Island Fishing Forecast.

Stripers to 18 pounds were reported on Cape Cod this week, as keeper-sized fish arrive in good numbers. The larger bass are concentrated around Buzzards Bay and the South Side, while the Outer Cape and Cape Cod Bay still have mainly schoolies.

Migrating fish have been reported as far north as Cape Ann, and the keepers shouldn’t be far behind.